Home How To Wearables Galaxy Buds Microphone Not Working? Try These 14 Fixes 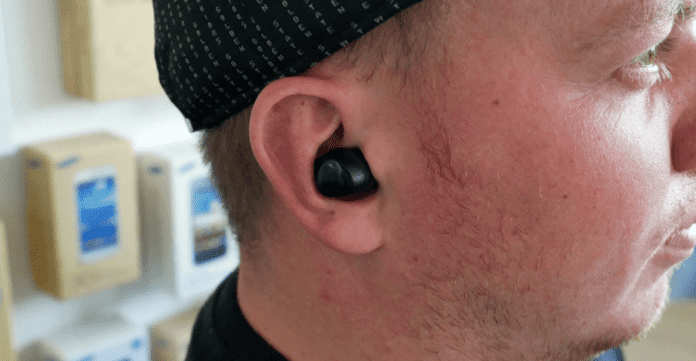 Why are my Galaxy Buds not working? (on Calls Specifically?)

If you can hear people through your Galaxy Buds but you can’t tall, it’s likely that your microphone is filled with lint and dirt particles that have been clogged up in the grills. If these microphones are blocked, the sound can’t get through the mic so callers can’t hear you on your Galaxy Buds. Therefore, you’ll need to clean them in order for people to hear you.

Your mic not working properly can be the product of too much wear over the months and years of you using your Galaxy Buds. Usually, there’s no way to fix this, however, you can take this to the Samsung repair store and see what they can do for you.

2. Audio Is Being Routed Somewhere Else

If your audio is being routed somewhere else, this can cause someone not to hear you when you’re on a call with them. The audio could be diverted through another Bluetooth device.

For you to know that the audio isn’t being routed through somewhere else, you simply need to check if headphones are plugged in or there’s another Bluetooth device that isn’t your Galaxy Buds is connected.

If there is a device connected, then the mic on your Galaxy Buds might not be enabled and may not be received the sound you’re providing it. If this is the first time it’s happened to you, then chances are that your audio was being routed somewhere else without your realizing it.

3. The Battery is Too Low

Since you can’t use your Galaxy Buds properly if your battery is low, then you’ll need to place them in the case so they can get a full charge. This will only take a few minutes so you can return back to the call without the duration being too long.

Another common reason why you can hear someone on your Galaxy Buds but they can’t hear you speak is the lint and the dirt particles get clogged in the mic at the bottom of your Galaxy Buds.

With that being said, you need to clean it up in an appropriate way to get people to hear you again. You can do this by using an anti-static brush and lightly brushing the mic at the bottom left to get the lint off. Cleaning your mic is a surefire way to increase the mic volume when you’re using it take calls etc.

If normally, people can hear you, then it’s safe to say that you can put it down to this. Software problems happen all the time in your Galaxy Buds so it’s nothing you should be worrying about.

6. Software Problem (it Might Have Happened After An Update)

You may have noticed that people are unable to hear you after a software update on your Samsung device. If you’re experiencing problems with your mic and people hearing you when you’re on calls after an update, chances are that the problem is bug-related and you’ll just need to perform some troubleshooting steps to get rid of it.

In this case, if this doesn’t work, then you’ll just need to wait for a future software update to be rolled out so that your mic can be fixed. There could also just be a generic glitch on your Galaxy Buds that’s causing the caller not to hear you.

7. Their Speaker Is Broken

Surprisingly, this problem might be occurring simply because the people you’re talking to on the phone have broken speakers and are unable to hear the sound properly. The sound may be muffled coming out of the speaker which is causing them not to hear them properly through – simply because their speaker is broken.

If you’ve experienced this problem numerous amount of times, then it’s safe to say that it’s probably their ear speaker having issues. But if this has happened a handful of times and the other times people can hear you perfectly, then the problem is down to the people that you’re speaking to.

When you’re on a call with them, you should ask them if they can hear you properly to ensure that there isn’t a problem with your Galaxy Buds mic.

How To Test If Your Galaxy Buds Microphone Is Not Working

If people can’t hear you on phone calls, you can test if your Galaxy Buds microphone is working by opening a voice recording app > tap the record button > speak to the mic > stop the recording > playback the recording and see if you can hear yourself.

If you couldn’t hear yourself, then callers won’t be able to hear you due to your microphone being broken. In this case, you need to contact Samsung Support.

They Can’t Hear You During Calls

The first thing that you’ll notice when your Galaxy Buds mic isn’t working is that the person on the other end isn’t able to hear you at all. This means that you’re routinely unable to conduct calls because your voice isn’t being heard on the other end.

Jump On The Phone To Multiple People

One way to test if there’s genuinely a problem with your mic since people are unable to hear you is to hop on the phone to many people in one sitting.

When you do this, you’re testing to see if this is a permanent problem that happens to everyone and not just something temporary that could be down to that person and not down to your mic not working properly. To make sure of this, you need to call people you know will pick up.

Use Another Pair Of Galaxy Buds and Test The Mic

If you have another pair of Galaxy Buds, you can make a call to someone and compare the quality of sound that they’re able to hear. This will determine if there’s a large difference between the mics on both mics.

If you find a large difference, then it’s safe to say that your Galaxy Buds mic is broken and they’ll need to be fixed. It’s best if this is done with the same model Galaxy Buds but if they’re close in terms of the year they were made, then you should be good.

You can use a brush or q-tip to clean the mic on your Galaxy Buds. The mics are located at the bottom and on the back of the Galaxy Buds handle towards the top. Make sure to clean it properly by scrubbing it unless you won’t get the wax off the mic Galaxy Buds. Once they’re clean, the mic should be able to receive the sound properly to output to the person on the other end.

2. Blow Compressed Air in the Microphones

To find where the microphones are on your Galaxy Buds, you need to look at the bottom where the grill is. The best way to get rid of this is to blow compressed air into all three microphones. This is going to push out the dirt stuck in there. This is also one of the best fixes to clear mic blockages on AirPods so it’ll work for your Galaxy Buds.

To remove the dirt in the microphone:

If you notice after doing this that people are still struggling to hear you, or you want to make sure the problem is solved, go to the next step.

A reset is going to wipe the system and take it back to the way it was when you first bought them. This will make sure that it’s a minor big and nothing major such as your chip being broken.

To reset the Galaxy Buds:

The problem could be caused by your Samsung and not by the Galaxy Buds themselves. To fix this problem, you need to reset your Galaxy Buds network settings. When these settings are wiped, it can fix connectivity issues with your Galaxy Buds and Samsung.

5. Locate And Speak Into The Microphone Below Your Galaxy Buds

Locate the mic at the bottom of your Galaxy Buds and speak into it during a call. This will focus all of the audio into the mic and make sure that the sound is being picked up.

If you use an app like WhatsApp, make sure the app has permission to access the microphone unless they’re going to be unable to process sound whenever you speak into the mic.

To do this, go to the Settings, select Privacy, App Permissions, select the app, then make sure the Microphone is toggled On.

7. Use Your Headphones Instead

A good fix for this is to use an external mic with a great one being the one on the Samsung Earpods. Using an external mic means that the problem can no longer be related to your Galaxy Buds mic. If there is a problem with this mic, then doing this can fix it.

If you want to update them, make sure they’re first connected to the device then you want to plug the charger into the case and close it. Once this is done you need to leave the Galaxy Buds overnight and wait for them to update. Unfortunately, there’s no other manual step that you can carry out to update them so you’ll just have to wait.

You can replace your Galaxy Buds with the new Galaxy Buds Pro (view on Amazon). It’s more reliable and doesn’t have issues like the first generation of Galaxy Buds. Upgrading your Galaxy Buds to new versions will eliminate the call and mic problems you’re experiencing.

If you have tried all the steps and people are still unable to hear you during calls, then it looks like there’s a deeper issue that can’t be resolved with troubleshooting steps. In this case, you’ll need to contact Samsung support to get this fixed. Problems with the mics on your Galaxy Buds are most likely to happen after having your Galaxy Buds for many years.

If your Galaxy Buds have a warranty or is with Samsung care, then you should be able to get this problem fixed for free. If not, you’ll need to go to Samsung Support and look at ways of getting the mic fixed.

13. Replace Your Microphone If It’s Not Working

If you notice that people are still struggling to hear you, you’ll need to replace your microphone. This means that the whole bottom section of your Galaxy Buds will be replaced.

If you’re trying to talk to Bixby and it can’t understand what you’re trying to say, then it’s safe to say that there’s a problem with your mic. If you notice that people can’t hear you during calls, and Bixby is also unable to hear you, the best thing to do is to contact Samsung Support to get the problem checked out.