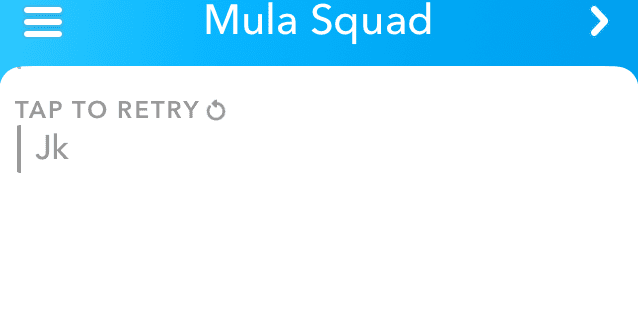 At the top of this message, you also see, ‘Could not send. Please try again’. This message can be really annoying because it doesn’t allow you to text your friends and family.

There are many reasons why Snapchat fails to send a message and a few ways you can try and fix this issue. By the end of this article, you should have gotten rid of the ‘Tap to Retry’ message that won’t go away when you keep tapping it.

When there’s an issue with Snapchat, it can cause a number of problems that stop you from using the app to its fullest potential. Even when you try a few troubleshooting steps to fix the issue, you still can’t send the message. Down below are a few different reasons as to why this message stays there.

Why Won’t My Snaps Send?

Another reason why your snaps won’t send is that you’re not friends with the person. Some people have it set that they can only receive snaps from their friends. If your snap couldn’t send to one person, but it could send to others, then it’s safe to say that they don’t allow messages from people who aren’t friends.

1. The Snapchat Story Has Been Deleted

If your snaps won’t send, most of the time it means that story has been deleted between the time the story appeared in the stories section and the time you tried to reply to it. If a story you were trying to send has been deleted, the message won’t be able to send because the Story is unavailable, so you’ll see the ‘failed to send’ message pop up.

2. Snapchat Is Having Problems

If you see an error, this means that there’s a problem on Snapchat’s side that couldn’t allow the message to send. To stop this error from showing, resend the message again. If it doesn’t let you, you’ll need to wait a few hours before you can try and send the snap again.

3. You Have No Internet Connection

If your router isn’t accessing the internet properly, this could stop your device from having a good network coverage which means that your direct messages won’t send.

4. Snapchat Servers Are Down

The last reason why your Snaps won’t send is that the servers Snapchat used to host the Snapchat app is down and this allows you to send and receive messages. When the servers are down in your specific location, it means that people near you can’t send messages as well.

When your snaps won’t send, Snapchat can say ‘Failed to Send’. This message means that your snap could not send to the recipient and it usually happens when Snapchat is experiencing a glitch and was unable to send your snap or, your internet connection isn’t strong enough.

Snap Failed to Send to One Person?

The failed to send error usually shows when a snap has failed to one person only. The means that there has been a glitch when you tried to send a snap to that specific person, so you’ll need to try and send the snap again. Since this message only shows up to one person, you can conclude that it isn’t a problem with routine maintenance. It’s likely down to a glitch in the app, or your internet connection.

What to Do If Your Snap Messages Won’t Send

If you can’t send messages on Snapchat, there are a few things that you can do to fix it. Usually, it boils down to a bad internet connection, a glitch, or Snapchat is down. You’ll have to find out which of these it is in order to get your Snapchat message to send again.

1. Check That Snapchat Has a Strong Internet Connection

If you’ve done all of this and you try and send the message again, it should send if your internet connection was causing the issue. If this didn’t fix the issue, go to the next step.

2. Check if the Snapchat Server is Down 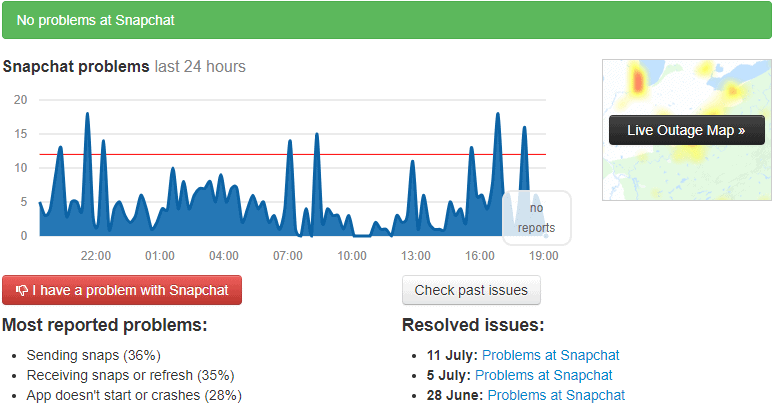 The next thing you need to do is to check if the Snapchat servers are down. If you notice that the tap to retry message is showing for all of your messages, you can assess whether Snapchat is down.

When Snapchat is down, this means that a lot of people will be experiencing the same issue as you so you should worry. The Snapchat app on your device runs on a server and that allows you to have access to the app.

This can simply be caused by the power to the server being cut off.

To check this, you can either ask a friend on another social media or via text whether Snapchat is working properly for them.

3. Restart Your Device and Close Snapchat to Remove Glitches

The next thing you need to do in this situation is to restart your device after closing Snapchat. When you close Snapchat, you’re shutting down the system which means that there’s a chance that the glitch will go away.

Restarting your device gets rid of all the glitches that are going on within your phone. The system is shut down then restarted again which means that all the issues that are stopping Snapchat from working are going to be wiped.

Restarting is a popular troubleshooting step to take because it’s very quick and it usually fixes the problem. Before you try and restart your device, you need to close Snapchat in the background so it’s not active while the system shuts down.

Once you restart your device, you can open Snapchat and check whether you can tap and send the message again. If this doesn’t work, go to the next step.

This may get rid of any issues that were causing your messages not to send and it’s worked for me plenty of times. ‘

After you’ve logged back into Snapchat, you can then try and tap to retry and see if the message will send.

5. Check if the Story Has Been Deleted

If you do try and send it while the post is deleted, but it hasn’t been deleted in the current stories section you’re looking at, the message won’t send. When a story is deleted, you can’t reply to it. You’ll need to refresh your story feed to check if the story has been deleted.

The main reason why an update would be released is to be able to get rid of a bug. If you look at the features of an update, you’ll usually see the term bug fixes. If you’re getting the failed to send error when you try and send a message on Snapchat, this update would fix the bug that’s causing it.

The best way to try and get rid of the problem is to update Snapchat. The main point of an update is to get rid of bugs that ruin the user experience and cause users to complain.

If you look at the features of most updates, you’ll see the term bug fixes. The developer sometimes states which bugs are being fixed, but most of the time, it’s not stated, so you’ll just have to notice the bug fixes when the new software has been installed onto your device.

Once you’ve done this, go back to Snapchat and see if your snaps will send. If this update didn’t get rid failed to send error, move onto the next step.

7. Wait For Them To Come Out With A Fix

If you notice that your snaps aren’t sending, you should wait for Snapchat to come out with a fix. If you’re getting the failed to send error, just know that this is a sitewide thing that everyone will be experiencing so the solution is to wait for Snapchat to get rid of the bug.

If snaps still aren’t sending, you’ll need to delete and reinstall Snapchat. This only works if the app has a bug that’s stopping your snaps from sending. To delete an app, hold down on it, press the x, then select delete and confirm your decision.

When these files are deleted, you’ll literally notice nothing but a smoother app and the best thing about this is that clearing the cache can get rid of problems that could stop your snaps from sending. When you clear Snapchats cache, it’s basically the same as you deleting the apps then installing it again and logging in.

It basically gets rid of the files that have been saved since the app was installed. To clear Snapchat’s cache:

After you’ve done this, you need to go back to the App Store and install the app again. After it’s installed, log back onto the app and see if your messages are able to send.

When you reset your network settings, this will fix any network problems that is causing your snaps not to send. Resetting the network settings clears any setting that relates to a network which could fix the app that’s having issues. When you do this, your settings will go back to how there were when you first had your device.

To reset your network settings:

A confirmation will pop up, tap on ‘Reset Network Settings’ again to confirm your decision. This will reboot your device and once it’s back on, go back into Snapchat and check if you can send messages without the failed to send to error message.

App developers frequently release new versions of their apps that include a variety of bug patches and new features. You should return to the Google Play Store or the App Store and see if an update is available. If you can still, you should contact Snapchat support. If an update for the program is available, make sure you install it as soon as possible. Often, this is sufficient to resolve the situation. This is a simple step although the process takes a long while and Snapchat may not even reply to the report.

Make sure to include as much detail about the problem as possible in your report. Information like the kind of phone or tablet you were using and what you were doing when the problem occurred may help them to address the issue.

Bear in mind that Snapchat is probably receiving a lot of reports about this issue so they’re probably working on it.