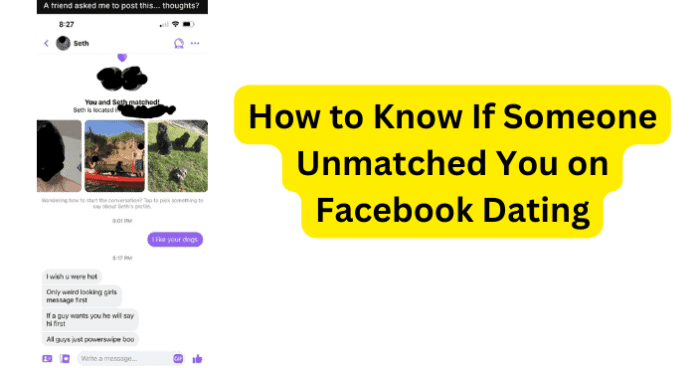 Being unmatched by a potential match is always a bummer, but how do you know if someone has actually unmatched you?

Sometimes it can be difficult to tell if someone has unmatched you and to add to the confusion, there are many possible situations in which it can point to the contrary.

Suppose you have been matched with someone on Facebook Dating, you would probably like to know if they have unmatched you so that you may rule out any other possibilities.

Lucky for you, you have come to the right place since, in this feature, we will show you what to look for when you think someone may have unmatched you on Facebook Dating.

Suppose you have been matched on Facebook Dating, naturally one of you reaches out to the other via the chat messenger, then you notice the chat has disappeared or has been deleted. This is because when someone unmatches someone on FaceBook Dating, the chat messages that were shared between both parties are removed.

It is important to mention that this does not always work properly, as some users have reported that all of their chats have remained even when they believe they have been unmatched. However, this is likely due to a bug in the Facebook Dating chat system.

With the previous statements in mind, if a chat between you and another user on Facebook Dating has been deleted, it likely means that they have unmatched you.

Although, many users experience messages staying in their chat inbox long after an interaction with a potential match; it is also possible for their chat messages to remain. So, while this is a good method to tell if someone has unmatched you on Facebook Dating, it is not a guarantee that they have unmatched you.

2. Their Profile Picture Has Disappeared

Similarly to other dating apps, when you are unmatched on Facebook Dating, usually the profile picture for the account that you have unmatched from will be gone. Now, this could be mistaken for being blocked by the other user.

Since when you are blocked by someone on Facebook Dating, you will not be able to view their Facebook Dating profile and will also not be allowed to interact with the person on the app.

It is important to note, that if you block someone on Facebook the block will extend to the Facebook Dating section, which means you to be able to locate their profile.

Interestingly enough, if you were to block someone on the Facebook Dating section of Facebook, the block will not extend the other way back to the original Facebook.

This functionality can be attributed to the fact that Facebook profiles and Facebook Dating profiles are indeed different. If you try to look at the person’s profile and notice that you cannot view their profile picture, it is very likely that they have unmatched you.

Why Would Someone Unmatch You?

Being unmatched by someone is almost always a punch to the gut, no matter what dating service you may be looking for a match on, but why would they unmatch you?

While it may be difficult to imagine, there are many possible reasons why someone may unmatch you on Facebook Dating.

From an accidental right swipe to you possibly saying something that they deem weird or off-putting. It could be an honest mistake or it could also be intentional, as you cannot match with everyone you come across.

1. They Didn’t Mean to Swipe Right on You

As previously mentioned, it is entirely possible that they simply did not mean to swipe right on you.

This is a common mistake on any swipe system-based dating service, as all it takes is one wrong swipe, and you are matched with someone you never meant to be matched with.

This mistake can happen easily, they could be simply getting up from sitting down while holding their phone and accidentally swiping the screen with their finger enough to swipe right.

It is also possible for someone to fall into a swiping “daze,” which typically occurs when someone is swiping away while resting and they fall into a daze, which presents the opportunity for accidental right swipes to happen.

2. You Said Something They Deemed Weird

While dating services like Facebook Dating are an excellent way to meet people, it can be difficult to come off correctly or convey what you mean when you are typing. Sure, there is plenty of emojis to help; however, even with emojis, there is still room to be misunderstood.

Also, not everyone will be a perfect match with you, they may not vibe with your sense of humor or otherwise. Not all personalities fit together properly and even with the Facebook Dating analyzing both of your interests to find a match, it is still possible for your interests to not align.

They could have been talking with you and were put off by something that you said, then naturally unmatched you.

If Someone Unmatches Me on Facebook Dating, Does the Conversation Disappear?

Yes, the Facebook Dating system will remove any of their chats if they have unmatched you on the app. As previously mentioned, there have been some scenarios where a conversation will remain in a user’s inbox even after unmatching or otherwise; however, this is likely due to a bug in Facebook’s system.

This means that the messages should have been removed but the bug is inhibiting the system’s function to perform the action.

So, if you have noticed that the chats from the account in question have disappeared, you can say for sure that they have unmatched you on Facebook Dating.

Sometimes when you are considering whether or not someone has unmatched you on Facebook Dating, it can be difficult to figure out if they have unmatched you or if they simply have deleted their account.

Luckily, there are methods to tell the difference and to come to a conclusion on the matter. If you notice signs that they may have unmatched you or have deleted their account, and these signs occur soon after you both have been matched with each other or have started talking; it is likely that they have unmatched you.

What Happens When Someone Unmatched You on Facebook Dating?

1. Their Profile Picture Will Disappear

2. Your Conversation History With Them Will Disappear

When someone has unmatched you on Facebook Dating, all of the chat messages that have been shared between you two will be gone. Sometimes a bug in Facebook’s system will stop the chats from disappearing; however, this is a good sign that they have unmatched you.

Does Facebook Dating Tell You If Someone is Unmatched

Fortunately or unfortunately, no, Facebook Dating does not have any notification to alert someone to be unmatched. However, there are signs that can give you a good idea as to whether or not they have unmatched you. So, the best you can do is observe these signs and form an educated guess.

Matching with someone is tricky on the best of days but it is a bummer when you are unmatched by someone. Though keep in mind, that they are but one person in a vast sea of people on Facebook Dating, so you are likely to be matched again.

It is interesting that a few years back Facebook hopped into the dating pool but it is no surprise since you hear many stories about how couples have met on the site or have re-kindled a past relationship.

Sure, it can certainly hurt to be unmatched; however, with some patience and a bit of strife, you are bound to find someone to connect with eventually.

It seems that Facebook still has some bugs to work out with Facebook Dating but this is no surprise since bugs, glitches, and other issues are bound to arise. We hope you found this feature helpful and if you did, consider sharing it with a friend or family member that could use some guidance.