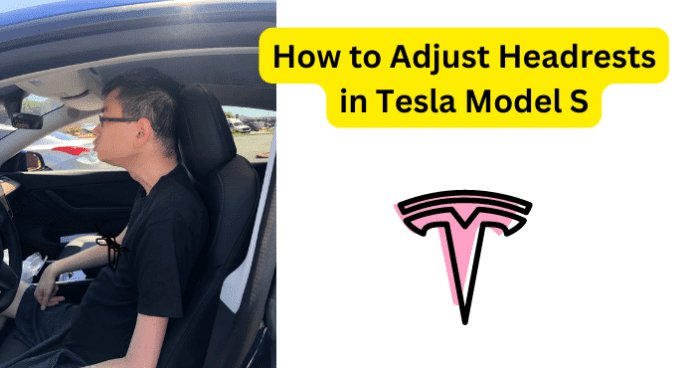 When you think about a Tesla, a few words may come to mind like sleek, modern, or maybe even futuristic, but what about comfort? If you own a Tesla vehicle or have even taken a ride in one, you may want to adjust the headrest and here, you’ll learn how.

Are The Headrests Adjustable in Tesla Model S?

Yes, the headrests in the Tesla Model S are adjustable indeed; however, it is quite different from typical vehicles. Usually, in any other car, you could just press a button beside the headrest’s prongs to manually adjust the height of the headrest.

Some may also know that this doubled as a safety feature for the driver and passengers, as you could press the button to release the headrest completely, and in the case of an emergency you could use the prongs of the headrest to break a window.

Unfortunately, this is not the case with Tesla vehicles since you can adjust them; however, you cannot completely remove the headrests.

Remember, when the headrests are developed for any vehicle they are not exactly aiming for maximum comfort since there is not any way to make them pleasant for simply resting your head.

Instead, they are thinking about the safety of the driver and their passengers, which only makes sense since around 13 car accidents are occurring every minute. So sure, the headrests may not be great to rest your head on while driving or riding, but in the event of an accident, they very well may save your life.

You may not be able to remove the headrests from a Tesla Model S; though, you can adjust them but how do we go about adjusting the headrests? Read along and we will break it down for you.

How to Adjust Headrests in Tesla Model S

As previously mentioned, the headrests in Tesla vehicles are developed with safety being the main focus, which is all fine and good; however, you may be a person that is a bit taller than average.

In such a scenario, you will likely want to adjust the headrest to be a little higher. Now, it should be mentioned that after Tesla released the “Christmas” update in December of 2021; many Tesla owners either had issues finding the adjustment setting for the headrest on their center display or encountered a bug that took the setting away completely.

Legacy Tesla owners voiced their displeasure on the “Tesla Motors Club” site; however, there hasn’t been any direct response to the issue from Tesla themselves but this does not mean that it can’t be fixed.

The Tesla Model S (2017) does have a fully functioning headrest adjustment setting; however, it is not like most vehicles in its functionality. Whereas on most vehicles you would manually adjust the height of the headrest with the button, and the button typically being located right below the headrest itself, but with the Tesla, you will be adjusting this setting via the center display screen. Below, you can follow these simple steps to finally adjust the safe but also oddly placed headrest.

To Adjust The Headrests in Tesla Model S:

Step 1. For starters, you will want to be seated inside your Tesla vehicle and go ahead and power it on, (do not fully start the vehicle).

Step 2. Next, you should find a couple of levers and buttons on the side of the driver’s seat, locate the lumbar support button pad (circular button pad) then press on any of these directions.

Step 3. By pressing the lumbar support button, an options side menu will appear on your Tesla’s center display screen. At the bottom of this menu, you should see two options which are “Lumbar” and “Headrest,” you will want to select the “Headrest” option.

Step 4. Once you have selected the “Headrest” option, now you can use the lumbar support button on the side of the driver’s seat to adjust your headrest up or down.

Step 5. You can also make the same adjustments for the passenger seat’s headrest by following these steps for the opposite side of the vehicle.

So long as you follow these steps correctly, you should be able to adjust the headrest for both the driver’s seat and the passenger’s seat. If you encountered any issues while attempting these steps, your Tesla Model S’s firmware version (2021.44.25.2.) may have a bug. If you believe this to be the case, read on for helpful fixes.

Why Won’t My Headrest Adjust in My Tesla Model S?

As previously depicted, it is likely that your Tesla Model S’s firmware may have a bug and it is also as equally possible that the center display screen for your Tesla Model S may be simply glitching the function.

After Tesla released a “Christmas” update for their vehicles in December 2021, many owners of Tesla’s had issues with their headrest settings with some even seemingly losing the option entirely.

It is important to keep in mind that even though Tesla vehicles are technologically advanced, the tools used within them such as the center display screen (control center) are still pieces of technology; therefore, they are susceptible to bugs, glitches, and malfunctions.

While Tesla has not come out directly to state that they are aware of the headrest issue, some Tesla vehicle owners have voiced their concerns to the company by scheduling review appointments.

These reviews have not offered a solution but Tesla has said to owners of their vehicles that the issue is “under investigation” and should be improved/fixed in future updates to the firmware; however, there has yet to be an update fixing the bug issue.

It should be mentioned that when we say “bug” it does not mean there is a literal bug in the center display causing problems; instead, it simply means there is an error occurring in the system that is causing the headrest adjustment setting to not be displayed or function.

A technical bug typically is a recurring problem within the system but it does not mean the end of the system, as there are methods to resolve this issue.

In the scenario that you believe that your Tesla Model S’s firmware has a bug, it can serve you and the system well to perform a soft reboot or commonly known as a reset.

These issues include but are not limited to bugs, glitches, and or malfunctions. Below you will find some easy steps to perform a soft reboot or system reset.

Step 1. The first thing you will want to do is to put your Tesla vehicle in Park, with all of the doors closed.

Step 2. Next, on your Tesla’s center display screen, you can go to and select the “Controls” option, then from the options menu, select the “Safety and Security” option and lastly select the “Power Off” option.

Step 3. At this point be sure to be careful not to touch anything including the doors, steering wheel, brake, touchscreen, etc, for at least five minutes.

Step 4. Once the five minutes have passed by, then you can open the door or press on the brake in order to start the system back up again.

Step 1. Starting out, you should put your Tesla vehicle in the Park position with all of the doors properly closed.

Step 2. For the next part, go ahead and press and hold down the brake pedal.

Step 3. There is a reason why this method is known as “the four-finger reset,” as you will need to press and hold both of the scroll wheels and both buttons located above the scroll wheels.

Step 4. Finally, maintain the hold on the brake and buttons until you see that the center display screen comes back on.

By correctly performing the before listed steps, the bug or any other minor system issues should be cleared and you should be able to adjust your Tesla’s headrest at your leisure.