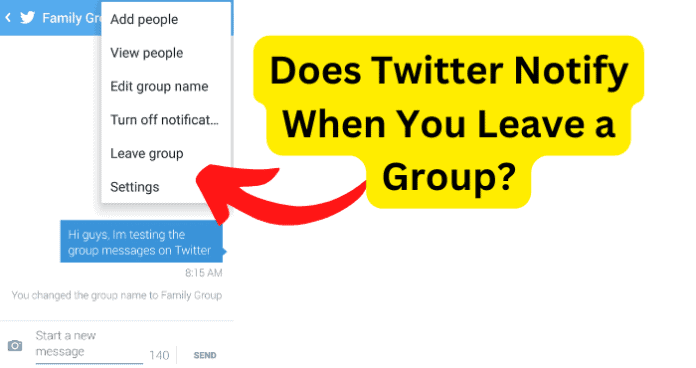 If you have been part of a group chat for a while, it can be awkward if you decide that you no longer wish to be part of the group. Leaving a Twitter group without being noticed can help to mitigate some of this awkwardness.

So you may be wondering, does Twitter notify the rest of the group when someone leaves? This guide will serve to answer that question so that you can know for sure whether or not Twitter will announce your departure from the group publicly.

Since this can be an awkward situation and lead to unwanted discussions or rumors from the rest of the group, it is ideal that you find a way to leave the group as inconspicuously as possible. This guide will help you do that. So read on and we will talk about how you can leave a Twitter group quietly without notifying the rest of the group.

When you leave a Twitter group, the group will get notified when you leave. A short message is left at the bottom of the screen saying that you have left the group.

This notification is grey so it may go unnoticed if people aren’t paying attention and as new messages come up, the notification gets moved up.

Important: Once you’ve left the group chat, all of your messages will be deleted. If you’ve been talking a lot in the chat, it’s best that you don’t leave until the chat is active without you saying anything. If you don’t message the chat regularly, people may not notice iten your messages disappear.

Tip: If you’re going to leave a group chat, it’s best that you leave when the group chat is most active. When group chats are active, people don’t really notice the details in the chat such as the grey notification.

Note: Once you leave a group chat if you’ve been involved in a disagreement, chances are that you’ll be added back to the chat. Usually, people will think you just left in the heat of the moment and will want to add you back later on.

How to Leave A Twitter Group Without Anyone Knowing

These methods are preferable if you no longer want to be part of a Twitter group but do not necessarily want your departure to be announced publicly to the rest of the group. Keep on reading to find out some of the best ways that people have found to work around these notifications.

1. Archiving And Muting The Chat?

Another loophole that you can use to leave an Twitter group chat without other people in the chat noticing is by archiving the chat. This method is best when you want to leave an inactive chat.

This involves you archiving the chat so that you don’t have to look at it each time you’re on Twitter. And since this chat is inactive, once you’ve archived it, no one will be sending messages within it so that chat can’t reappear for you again.

To archive a chat:

2. Find the chat that you want to Archive.

2. Blocking A Twitter Group Chat To Leave Without Being Noticed

Another great way to get out of an Twitter group chat without anyone noticing is by blocking the group.

This doesn’t mean that you’ll be leaving the group, it just means that you won’t be receiving notifications from the group, and no one in the group can message you. This is another alternative to actually leaving because it has all of the benefits and no one will receive a notification.

Blocking the group involves you going to everyone individually and blocking them. This is only a good method when you’re not close with anyone in the group so they won’t later on try and message you personally.

There’s no way that they can find out that they’ve been blocked so it’s a good loophole to actually exiting a group and notifying everyone.

3. Block And Ignore The Chat

If you don’t want to leave the group chat for fear of coming off as rude, you could try simply not opening the group chat messages. They may think you’re too busy for the group chat, or that you uninstalled the app.

However, if you don’t want to do this, if you’re going to simply ignore the group chat, you’ll probably want to turn notifications off.

This can be an easy alternative to leaving the group chat or logging out of your Twitter profile to avoid the notifications. Here’s how to disable your Group chat notifications.

Step 1.  In the Twitter DM’s, go to the group chat in question.

Step 2. Tap the name of the group chat at the top of the screen.

Step 3. At the top of the group chat ‘Details’ page, you should see ‘Mute messages’ and ‘Mute call notifications’. If you turn both of these settings on, you will not receive notifications from that group chat until you turn the setting off.

Turning off Twitter group chat notifications is that easy, and this can be done for any type of conversation – not just group chats!

5. Leave When The Group Chat Is Busy

When lots of messages are being sent at once, it’s the best time to leave the group chat without them seeing the message.

Since there are so many messages being sent at once, the chance of others seeing the notification that you left is smaller than it would be otherwise.

However, this plan is not foolproof; there’s still a decent chance other members will see the message, and even if they don’t, they’ll eventually notice you left at one point.

Rather than fearing what people will think of you if you were to leave the Twitter group abruptly without saying anything, you can try and leave the group politely so that you don’t come off as rude.

Since there is no way to really leave a group without anyone knowing, having a good reason to leave the group chat will allow you to smoothly leave the group while continuing to use Twitter as normal.

There are many polite reasons and excuses for leaving a group chat; you just have to choose one that sounds believable. Here are multiple solid reasons for leaving the group chat that people can’t really be mad at!

“I’ve got no storage and this group chat is taking a lot.” – This works well if there are loads of videos and photos being sent in the group; they’ll think it’s a genuine reason and it’ll look better than just leaving the group abruptly.

You could also couple this up with that you’ve tried to delete lots of videos and photos from your camera roll, and it’s still saying Twitter is taking the most storage and this is the only active group chat you have on Twitter.

“I’ve got a data limit and Twitter is using too much data too quickly” – this gives them a genuine reason, which is that your data is being drained up by Twitter too quickly, and you need to leave to prevent it. You could also pair this up with the fact that you’ll join the group again once you get more data. “I’m trying to cut down on Screen Time” – Since this is something that many people focus on, it’s a totally perfect excuse for leaving a group chat.

They’ll understand that reading and responding to group chats take up an excessive amount of time and can be extremely distracting, so taking yourself out of it will free up some time for you.

Most people who have exams have to go through a strict period of revision prior to, and if they realize you need fewer distractions, they should understand, and if they’re good friends they’ll let you be.