Home Do More Getting More Help Can Someone See Who You Follow on Snapchat? 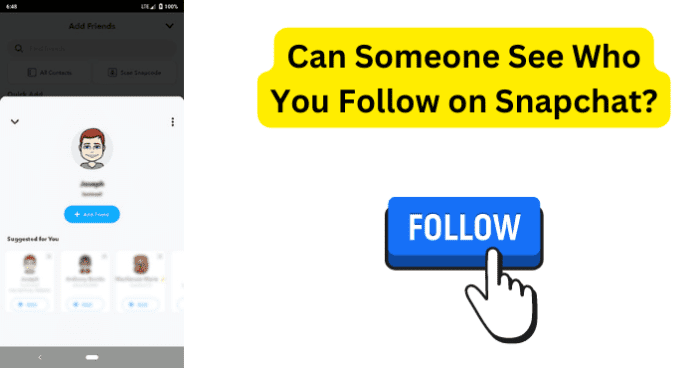 Similarly to other social media apps, you can gather ‘followers,’ which leads us to the burning question “can someone see who you follow on Snapchat?” This question will be answered in this feature and more, read on to find out.

No, your following list is private to you. It may be a surprise to know that Snapchat did initially allow its users to view the best friends list or ‘followers’ of other users on the app; however, this feature was disabled and removed by the app’s company Snap Inc.

This is partly due to Facebook’s failure to buy out Snapchat, which gives Snapchat a very unique privacy policy in contrast to other social media platforms. Snapchat does not allow people to see your followers list and there is no third-party app tool that will allow people to spy on your follower list either.

When considering the type of app that Snapchat is (an instant messaging social media platform), it is quite interesting that you cannot go onto someone’s profile and see who they follow; this privacy is yet another feature that sets it apart from other social media apps.

It may be tempting to see who someone follows on Snapchat, which may lead you to go on a search for tricks and methods to do so; however, if you were to find a video on Youtube or somewhere else that claims that you can view someone’s ‘followers’ list on Snapchat, do not waste your time. All videos or otherwise claiming such methods are simply clickbait.

Say what you will about Snapchat’s privacy policy but they have done an excellent job at keeping their user’s information secure, which includes your contact list, as this is also private to you and you alone.

Can Someone See Who You Subscribed to on Snapchat?

You could be pondering this question if someone has added you on Snapchat and you are not sure how you two are acquainted or if you are at all.

The ‘Quick Add’ feature on Snapchat is very similar to the ‘Who You Might Know’ feature on Instagram, this is when Instagram recommends you to follow certain people based on your friends/accounts that you follow. It is also very possible that they may have added you by mistake through someone else with your Snapchat username, and the same could be said for through your phone number.

Can I See Who Someone Follows on Snapchat?

No, you cannot see who someone follows on the Snapchat app. As previously mentioned, Snapchat is unlike any other social media platform. To find someone’s Snapchat you have to have their Snapcode, specific username, or their phone number.

This means that you technically do not have any followers on Snapchat. Fortunately or unfortunately, Snapchat does not have a feature in which you can see who someone follows.

This is a good point to distinguish the difference between the ‘Subscribing’ and ‘Adding Me’ features on Snapchat. When someone sends you a friend request on Snapchat, which again is only possible if they have your specific Snapchat username, Snapcode, or your phone number in their address book.

These ‘friend requests’ will appear under the ‘Added Me’ section; however, other Snapchatters can subscribe to you from ‘Spotlight,’ ‘Our Story,’ ‘Discover,’ or by using the “Subscribe” button option on your public profile. Also, you will not receive a notification for new subscribers.

No, since there is no feature or method for anyone to see who follows who on Snapchat, there is no way and no need to hide who you follow on Snapchat. Again, it should be mentioned that on the Snapchat app you technically do not have ‘followers’.

We should also remember that Snapchat used to offer the ability for its users to see each other’s friends list, which may be perfectly fine for other social media platforms like Facebook; however, many Snapchatters recognized this feature as being an invasion of privacy.

Snapchat has consistently done right by its users, and in this case, it was no different. Without argument or objection, Snapchat kindly responded by making the friends lists private for all of its users. While this is a great way to preserve the privacy of the app’s users, it may put a damper on those who prefer to show off their friends list.