Home Social Media Instagram You Can’t Reply to This Conversation 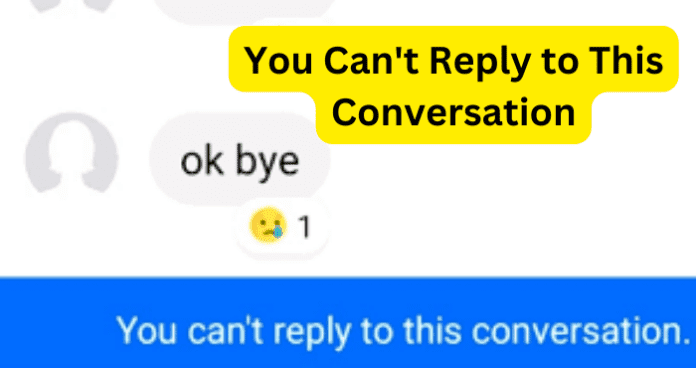 What Does ‘You Can’t Reply to This Conversation’ Mean?

Why Does It Say ‘You Can’t Reply to This Conversation’?

The error ‘you can’t reply to this conversation’ is appearing because the messages you are trying to send to that person are not getting through.

You may see the messages being typed up, or even see them pop up on the screen as if they have been delivered, but if you are seeing this message the person you are trying to send them to cannot view them.

On your intended recipients screen it is as if you haven’t sent them any messages at all. They can see their own posts, and their own messages they have sent to other people. But there is no way that they are able to see messages from you if you are receiving the ‘you can’t reply to this conversation’ error.

1. The Recipient Has Blocked You

We have discussed earlier in this article that while on the Facebook social media platform each individual user has the ability to block other users. This feature might be useful to you personally if there are certain people you’d rather not socialize with, but have you considered that someone might have done this to you.

An odd thing about the block feature is that if you are the person that is being blocked by another user, then there is no way for you to find out.

Blocking is done in an incognito fashion, where you don’t receive any notification when someone has blocked you. In fact, you can still see the person you are trying to contact on Facebook and their profile won’t stand out in any shape or form.

It will look exactly like everyone else’s profile to you, even if that person has blocked you and the other people have not blocked you.

The main thing to look for when this happens is to see what happens to your messages when you try to contact a person that has blocked you. You could very well be getting the ‘you can’t reply to this conversation’ message. If you receive this, then that could mean that someone has blocked you.

The first is that your message has been sent. While the second message is that the text you sent has been delivered. With this in mind however, neither of these two notifications will appear on your screen while trying to message someone who has blocked you.

Fix – Ask Them to Unblock You or Message Them Somewhere Else

Now what should you do? An easy fix is the scenario where you are trying to message someone you know personally and they have blocked you.

This is likely just an accident. The person you know probably was trying to block someone else and accidently blocked you by mistake. Don’t worry, just because you are blocked on Facebook does not mean that this person has blocked you anywhere else.

As mentioned before, they probably blocked you by mistake so simply message them through a text or another social media platform that you both use to communicate with them.

Once you’ve messaged them on a different social media platform, or through a normal text message, then you should see the normal notifications of sent and delivered. Then you will be able to ask them if they can unblock you from Facebook. Once they’ve unblocked you, the error message of ‘you can’t reply to this conversation’ will go away.

It is good to remember that just because you received the message ‘you can’t reply to this conversation’ doesn’t mean that you have absolutely been blocked by the person you’re trying to message.

As we mentioned before, there are several reasons for why this message could appear on your screen, and this next reason is just another thing that can trigger this error message to appear.

Not only that, but there is no notification for any other user to let them know this account is deactivated. To everyone else, including you, the deactivated account appears to be completely normal.

Once the account is flagged as deactivated the Facebook system will slowly start to delete all of that account’s posts and messages.

This process can take up to ninety days. This is why you’re still able to see the deactivated account and attempt to message it even if the person hasn’t been active for thirty or more days.

The process of removing the account from Facebook all together depends on how active the person was before quitting. If the person was not a super active user, then it could only take a handful of days for the system to delete all of their posts and messages.

To recount, if you ever see the error ‘you can’t reply to this conversation’, try checking the person’s old posts and messages.

If the user’s old posts and messages are slowly being deleted then you might not have been blocked after all. The person has instead stopped using Facebook and their account was deactivated.

Fix –Message Them Somewhere Else

A final note is that if a person does decide to delete the Facebook app or take down their account, then what happens during the deactivation process could be occurring as well. If a person deleted the app or their account the day before, then it is likely that the Facebook system has not had time to delete (remove from public view) the account yet.

Therefore if you try to message an account that has recently been deleted it is likely you will receive the ‘you can’t reply to this conversation’ message. So try to message them somewhere else.

3.  No One Exists in The Group Conversation

Make sure to check how many people are still remaining inside of your group chats, because it can be very likely that the group chat you are a part of is now down to a single member. You!

4. Your Messages Are Marked as Spam

Facebook messenger works the same way as your emails! There is in fact a spam folder for Facebook messages and if you are receiving ‘you can’t reply to this conversation’ it might be because your message is being redirected to your recipients spam folder.

Unfortunately, there is not a whole lot you can do on your end. Taking out links and any other stereotypical statements might help the system decipher that your message is indeed not a spam message, but the main way for you to fix this issue lies in the recipients’ hands.

Just as if you were accidentally blocked, try to message your recipient using something other than Facebook messenger. Text them using your normal cell numbers, or message them on another social media platform and ask if they can check their spam messages.

If none of the previous steps have been the solution to your message error, then you might want to consider that your message goes against Facebook Community Standards.

Every user is required to accept terms regarding what is deemed as appropriate language. These terms are to protect every user from messages such as harassment, vulgar, and unwanted messages.

Check to make sure that the message you are trying to send does not have any vulgar or explicit statements in it that might trigger the community standards system and be taken down. If your message does have profanity or other stereotypical vulgar statements in it, then that can be the reason why you are receiving ‘you can’t reply to this conversation’.

Fix – Change What You Want to Say

Simply change what you want to say, or say it in a way that does not go against the Community Standards, and then you will be able to re-send your message.

If you have gone through all the previous steps and still can’t find out why your message won’t go through, then it can unironically be just as simple as a bug. You could have done nothing wrong and the Facebook system is simply having a little issue.

You can solve the bug issue by first restarting your app. If you are on a computer, try closing the application window and re-opening it. A lot of times if you try to load the Facebook app or window too quickly, it can only partially load. Restarting it will allow it to load properly, and it will no longer be missing key systems it needs to function.

Fix – Try Using Messenger.com Rather Than the App

Another thing you can do is to try and use Messenger.com instead of the app. Sometimes apps need maintenance, and restarting the app over and over again wont help because it is not your end that is having the issue. It’s Facebook’s end! To avoid using an app that is undergoing maintenance simply go and use a different messenger such as going to Messenger.com

Lastly, try clearing the Messenger App Cache. Another likely scenario is that there is no maintenance occurring and your app didn’t load incorrectly, it might just be that your App Cache is backed up and it is blocking any actions you’re trying to currently do.