Home Social Media Snapchat Who Is In My Cameo Story? 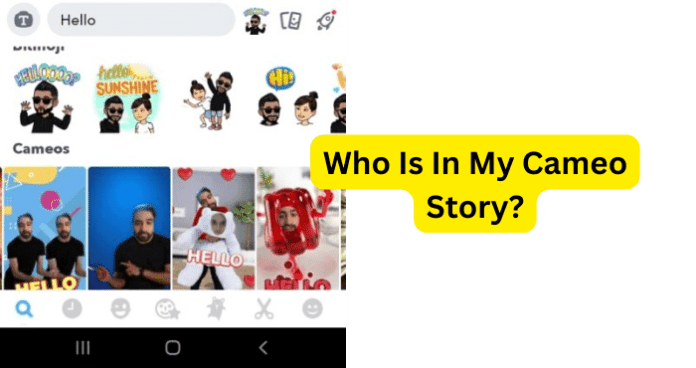 There are many Snapchat users who utilize the Cameo feature to add a little fun to their feeds. However, when a cameo is generated by Snapchat, and someone is added to the Cameo, some people are unaware of who the person is.

This leads to a question many consumers desire an answer to. And that question simply is, who is in my Cameo story?

Well, the person in your cameo story is the last person that you have snapped on Snapchat. If you didn’t choose someone from your chat thread, Snapchat has generated the individual in the Cameo for you.

How to Figure Out Who’s In Your Cameo Story

If you are a Snapchat consumer that has experienced an unexpected photobomb in a Snapchat cameo, and you want to know if there are any essential steps or methods that you can follow to figure out who the person is, well, you are in luck!

There are some essential steps for you to follow if you want to figure out who the person is in your Cameo. The incredible thing about these alternatives is that they are simple and easy to follow. They are not time-consuming, and they take less hassle to complete.

As an option, you can take a close look at the features of the person in the Cameo and compare it to the bitmoji to see if it resembles someone in your chat list.

You also have the option to take a screenshot of the person in the Cameo and post it as a story to ask your followers who the person is.

As you see, these alternative steps seem very easy to proceed with. So, for you to see exactly how easy they are, let’s go ahead and jump right into testing the theory of each one!

1. Look At the Features of the Person in Camera and Compare It to The Bitmojis in Your Recents Lists and See Who It Resembles the Most

For this first alternative, you genuinely have to use your intuition as well as exceptional observation skills.

In other words, you would have to look carefully at the features of the person that is in the Cameo. And as you are taking a glance at their features, ensure to take a glimpse at their bitmoji to see if it resembles the bitmoji or see who it resembles the most.

The emojis on Snapchat are generated based on characteristics and traits that each Snapchat user has utilized to identify themselves in character form. The bitmoji is a fun way for consumers to express themselves based on how they want the world to see them.

For you to proceed with successfully investigating this occurrence using this method, you can proceed with these steps:

1. Before taking a look at the person’s bitmoji, it is essential to take a screenshot of the Cameo so that you will be able to have a focal point as you are investigating.

2. After taking a screenshot, navigate to your chat list of people you have previously snapped.

3. To select the previous person you have snapped, navigate to your friends list by swiping right from the home screen.

4. From here, your list of followers and friends will appear.

5. To get a full view of the friend you have selected, you can press and hold on the tab of your friend’s username. Or, you can simply tap on it, and a screen will appear showing the bitmoji of that friend.

6. Now that you have the screenshot of the Cameo, please take a look at the features of the person in the Cameo and compare it to the bitmoji of the previous people you have snapped.

This is a grand theory to use to isolate this occurrence. If you happen to discover that the features are similar to someone you have previously snapped on Snapchat, feel free to reach out to that person and ask them if they are aware of the Cameo.

2. Screenshot the Person in the Cameo Story and Put It In Your Story Asking Who It Is

Before you post the screenshot of the Cameo as a story for everyone to view, first, it is essential for you to take the screenshot and save it to your device.

To take a screenshot using your Android device, you must proceed with the following steps:

1. First, navigate to the Cameo on your Snapchat app.

2. After you have found a cameo, press and hold the volume down button and power button simultaneously.

To take a screenshot using your iPhone / iOS device, you must proceed with the following steps:

1. It would be essential if you start by pressing the side button and the volume up button simultaneously.

2. Next, quickly release both of the buttons at the same time.

3. After the screenshot of the Cameo is taken, a thumbnail will appear in the lower left-hand part of your screen as a temporary thumbnail.

4. To view the full image, tap on the thumbnail on your screen to open the full image. Also, the image of the Cameo will be saved in your phone’s gallery.

1. First, navigate to the screenshot in your Android or iPhone / iOS gallery.

2. Once you have found the screenshot, you will need to share the image with the Snapchat app.

4. Scroll downward or to the left or right (depending on your device) until you see the Snapchat icon, and then tap on it to share the image to your story.

5. If you are using an iPhone / iOS, you can simply open the Snapchat app on your device and tap on the small photos icon at the bottom of the screen.

6. From here, tap on the camera roll located at the top of the screen and then select the photo or video from your device.

8. Once the screenshot is posted as a story, you will have the option to input text to ask the crowd who is the person that is in your Cameo.

When you proceed with this alternative, not only will you have the option to ask everyone on your list, but there is a slight chance that whoever it is in the Cameo will actually speak up.

If someone happens to come forth, it would be essential to ask them if they are aware of the Cameo as well.

Just like the previous alternative that was listed earlier, this one is relatively simple and easy to utilize. Although there is no other internal way for you to find out who the person is, this method is quick, simple, and instant gratification at its best.

Why Is There A Stranger In My Cameo Story

There are many consumers who scream stranger danger if they notice some suspicious activity from people they don’t even know. If you think there’s a stranger in your cameo story, there is something to consider before jumping to conclusions.

1. There Isn’t A Stranger. It’s Someone You Recently Snapped

If you are someone who utilizes Snapchat on a day-to-day basis, there may be instances where you forget who you may have chatted with last.

Or, in this case, you may forget who you snapped last on Snapchat. And that is perfectly understandable.

If you receive a cameo and you’re not certain who the person is and the Cameo story, there is a possibility the person in the Cameo isn’t a stranger at all. This just might be someone who you have previously snapped on the app.

The cameos are generated based on previous individuals you have snapped or connected with. So, these cameos can be random appearances from individuals or your chat list you may not have snapped in a while.

And sometimes, if you haven’t snapped at someone in days, weeks, or months, and they were the last individual you connected with, there is a chance the person is in the Cameo is actually the last person you snapped at.

Why Are Cameo Stories So Weird?

The consumers who find cameos to be very strange are individuals who most likely don’t utilize the app and its’ features and its entirety.

Some people who just strictly use it to stay in contact with other individuals, such as friends and family, only utilize it for that purpose and that purpose only.

So, for consumers who don’t utilize all of its features, that includes The Cameo feature, it may seem out of the blue for Snapchat to generate an interesting photo with a fun background, and that consumer is unaware of who the person is.

And in other contexts, individuals that may consider Snapchat cameos to be abnormal are people who don’t utilize Snapchat as much.

So, they may be unaware of this feature and may be caught off guard if someone they know had a Snapchat Cameo generated with them involved.

For consumers who understand Snapchat and its entirety and actually use all of its features, including Snapchat cameos, this is something that doesn’t appear as weird or strange to them.

This is a feature that is considered to be fun and innovative. Also, individuals who utilize this feature see it as a way of expressing themselves in a very creative manner.

So, as opposed to consumers who see this as something bizarre, for Snapchat consumers that use the Snapchat cameo feature, there is more positivity than negativity.

As opposed consumers who don’t like this feature believes that it generates more negativity than positivity. This is primarily common because of the fact that it can be annoying if they receive a random cameo image they are unaware of.

It can be quite surprising when you have a cameo generated, and you are unaware of who the person is that has photobombed your Cameo.

If you are someone who has experienced this and you want to know who is in your Cameo, if you didn’t select an individual from your snap threads, Snapchat has generated a user for you.

And typically, the person that is generated is the last person that you have snapped on Snapchat.

With that being stated, there are a few ways for you to figure out who is actually in your cameo story; You have the option to look at the features of the person in the Cameo and compare the bitmojis to see if it correlates in any way.

Also, you can screenshot the person in the Cameo and post it as a story for your followers to see.

Doing this will allow you the opportunity to ask your followers who the person is. There is a possibility one of the followers that see this post will actually be the one that is in the Cameo.

Along with other essential tips, the next time you are uncertain, follow through with these alternatives to investigate it.