Home Social Media Snapchat What Your Snap Score Says About You? 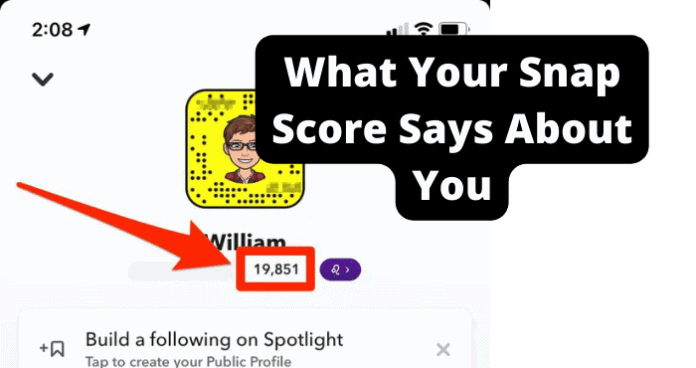 What Does Your Snap Score Say About You?

A Snapchat score is the first thing someone looks at when they go to follow you. This way, they get to know what kind of chatter you are.

These people are the ones who either don’t use Snapchat all that much or just stay with their friends and family. They might be a bit older and not understand what Snapchat is really about, so they don’t use it much.

They may also not use the features as much because they are just there for the filters. This can happen when a person uses Tik Tok or other social media more and wants to use the filters to make their videos and make themselves look better.

They might like the beauty filters and don’t want their followers on other apps to know they are using them. Either way, they stay away from using Snapchat to communicate with other people all that much.

If you are friends with some of the people with these lower scores, you probably know they don’t Snapchat much. If you want to help them increase their points, you can offer to help them learn more about the app and get their score up.

They may not even realize that people can see it and will want to raise the score too. Offer to Snapchat them more and help them get the score up and tell them to Snapchat their friends more so it goes up each time.

These people can be older as well and might use the features in Snapchat more than those that have scores that are lower. They may also have more people they know and are chatting with inside groups and communities within Snapchat.

They use it more for communication with the people they like and that they know, but also will some that are not their direct friends.

These people are close to the average. They may not use Snapchat a lot, but they are in groups and Snapchat regularly. This means their score is higher than some of the others, and it falls in an average to low average score.

They probably found groups that they could connect with and people that they wanted to talk to. They may even be talking to people in other areas of the world with the same interests.

This is great because they will learn new things, and they can learn more about Snapchat and its features. They might be using the filters to help with their snaps, and they might be posting them to other social media platforms.

If you are in this average point system, then you have a pretty good understanding of Snapchat and the features it has. You probably have a lot of friends on there and are snaping a regular amount of time.

You might not be spending all day there, but you are getting a lot out of it. This is a great area to be in because you don’t want to be on this app constantly.

This is a Snapchat person. Someone that spends a lot of time on the app and that connects to a ton of people. They also use streaks and Snapchat a lot.

They may be using the filters a lot to make interesting videos that get a lot of traction in groups and that create a ton of communication between them and other people. They are also probably very active in groups and group chats that they might have with their friends.

These people are the talkers. They chat with everyone they can and are probably very active in all the groups they are interested in, as well as some that might have been interesting but died off.

They may also be someone that has had the app for a long time. The longer they have had the app, the larger their score will be. You can check how accurate the score is by looking at their recent activity, if possible.

It can tell you how often they chat in groups and with other people. They also might be more active now than they were when they started, causing the score to go higher now than it used to be.

There are people that got the app when it came out and then didn’t use it until much later. The best way to know is to have a conversation with them and see where they fall within this.

They might be the opposite and not talk as much now as they used to. If they don’t talk as much as you would like, you can stop communicating with them and move on.

This is a user that has been around for a long time. They might be chatting a lot with a lot of different people, and they are probably in a lot of groups and group chats. They are probably on the app all the time and may not even be a real person.

This is one of the issues with Snapchat, the number of bots that have high number counts and aren’t actually users.

If you are worried about this, then you can just not communicate with them and move on to another user. This way, you won’t have to worry about it spamming you or causing other issues.

When a bot starts to communicate with you, it will send you a lot of messages back-to-back and will possibly even send you communications about a product or something they want you to buy.

They might also send you messages that can hurt your device if you open them. That is part of the reason a high Snapchat score can be a huge problem. If you are in doubt, then just move on to the next person and block the potential bot account.

This kind of account is usually a person that has had their account for a long time and has used it a ton. This also can be a red flag for a bot account. Normally, Snapchat is good about getting the bot accounts shut down, but sometimes they will sneak through.

The best way to know is to contact the account and have a conversation with them. They will chat with you if they are a real human. If they are not, they will probably send you all kinds of links or will try to sell you something.

If you are unsure, you can report them to Snapchat and block the account. This way, you won’t be bothered by them again. If you find they are a real person, they may be extremely active with their accounts and may be posting at all hours of the night and day.

They may send you messages when you are not awake, and you may have multiple messages from them. They may also be very invested in groups that are active on Snapchat.

This is another great way to make sure they are not a bot. The number of groups they are in will be a big giveaway if they are a human or not.

The average Snap score for a girl (is 150k). This is because they usually use the filters more and connect with more people on Snapchat. They may be involved in a lot of groups and speak to many people within these groups.

They usually are just better at connecting and keeping that connection with the people they like. They may also just be the kind of person that likes to connect to everyone in their circle and beyond.

They might just be very fond of the app and like to use it for everything and everyone they know. If they have a higher score, you may want to watch out for the possibility of a bot account.

This can be more common ins certain groups that are not regulated as well as others. If you are in doubt, you can block them and report the account to Snapchat.

The average Snap score for a boy (100k). This is lower than the average for a girl because guys tend to use Snapchat for only a few things. They might use it to connect with the people they know or that have similar interests.

They might not want to connect with everyone that crosses their path like girls sometimes do. If their score is significantly higher than this, then you might want to watch where they post and if they have a high presence on the app.

They might just use it more to connect with the people they decide they want to. If in doubt, ask questions and then block if it’s not what you expect.

If you’re wondering what the highest Snapchat score, you can find out.

What Snapchat Score is A Red Flag?

500k plus can be deemed as a red flag. One million plus is for sure a red flag. This is because they would have had to post nonstop since the app was created.

If they are not a bot, they are for sure on the app way more than they probably should be connecting with people. This might be something they do if they are running a business and want to use it to connect with the people they are serving.

They will normally have the account set up as a business account, and you will be able to see they are using it that way. This way, you won’t be worried about the amount of their score because it’s up front that it’s a business and not a person.

If you aren’t sure and they are sending you links and trying to get you to purchase products, you can contact them and ask them to stop. If they are a real business, they will honor your request.

If they are a bit of a scammer, they will keep bothering you until you report the account and block them.

Snapchat scores are an important thing that you can use to decide if someone is a scammer or not.

They also help you to understand what people are using the app for. A lot of users have used the group settings and the basics of Snapchat, but not everyone understands how it works or that they even have a score.