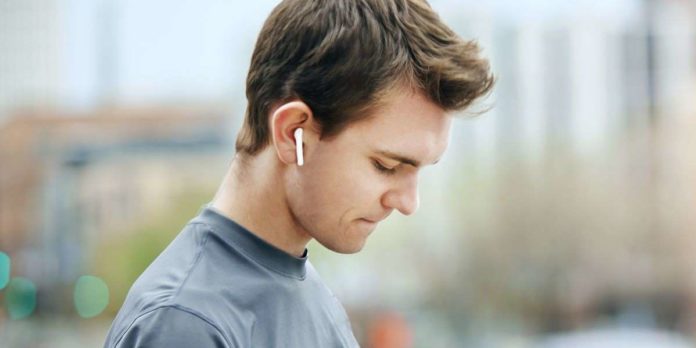 Why Does One AirPod Drain Faster Than The Other?

One AirPod Is Being Used More

One reason why one AirPod loses battery faster than another might simply be because one side of the AirPods case is damaged which means that one side gets charged less which can make it appear as if it drains faster, when in fact it just gets charged less. Over time, lint and other dirt particles can get stuck in your case’s data ports where the AirPods are housed and this can prevent it from charging when you put you connect your lightning cable. Cleaning the data port is simple but if one AirPod still won’t charge as much the other after that, it’s likely that the data port is fully damaged.

Another reason why one of your AirPods or AirPod Pro isn’t losing charge faster than the other is because of a software issue. There could be a bug that’s causing a failure in the operating system which is preventing the case from being charged. To remove this bug, a hard reset will need to be carried out so that the system can be refreshed and the software problem can be removed.

You May Notice That One Side Always Has Less Charge

When you take your AirPods out of their case after charging them, you’re shown the battery percentage of both AirPods. If you can see that one AirPod has less charge than another, then it’s clear to say that there’s a problem with the port for that Airpod. Since the port is damaged, it may cause issues when it comes to charging that specific AirPod.

One AirPod Unable to Charge to 100%

If one AirPod isn’t charging to 100 percent each time you check on your iPhone, then this could be down to the port that houses that AirPod being damaged due to a short circuit. You might find that your AirPods only charges a certain percentage but it never reaches 100%. The best solution would be to replace your AirPod case since it’s unable to charge one of your AirPods properly.

Is It Your Left AirPod Dying Faster Than Your Right

People tend to notice that it’s the left AirPod that dies faster than the right. It may be the case that people tend to favor using their left AirPod more than their right which has caused there to be a problem with the left one specifically.

How to Know If One Of Your AirPods Ports is Damaged?

If you want to know if one of your AirPods charging ports is damaged, wait till both of your AirPods are completely dead. Then you need to place both your AirPods in the case at the same time and wait for a while. After a while, lift the case and check your iPhone. If you notice that one of the AirPods has less battery than the other, then it’s safe to say that side of the charging system in your case is damaged. After repeating this 3 times, you should know for sure if there’s a problem with one side of your AirPods in the case. Another to know is simply if every time you’ve charged them, one AirPod is always quick to die while the other one lasts much longer.

Don’t Use One AirPod More Than The Other

One of the most common reasons why one AirPod would drain faster than another is if one AirPod is used more than the other. If you notice that you constantly have one AirPod in and it cause the battery to drain faster than the other, then you’ll know that this is the cause of the problem. Make sure that both AirPods are in at all times and even if you take one out, don’t put it back case because it will start charging – if it doesn’t charge, the battery will still remain meaning that the side that you constantly use will always have more charge.

Drain that AirPod Fully and then Charge:

If one of your AirPods is draining quicker than the other then you can try draining the battery of weaker AirPod until it is completely dead. Once it is dead, put it on charge and let it be fully charged prior to using it. You can also drain both the AirPods fully and then charge them together to calibrate. Doing this will also address the issue in the weak AirPod.

Again, this solution is not specific to a single AirPod, but it will likely get the job done for the weaker AirPod. All you need to do is to put your AirPods back in the charging case. Now locate the Round Button at the backside of the case. Press-hold this button for 10 to 15 seconds until you see a white flashing light inside the case. This white flashing light is an indication that the AirPods have been successfully reset. Now you would have to reconnect the AirPods with your iPhone.

You want to go through the ports and check that they’re not damaged in any way. For the side of the AirPod that keeps dying early, take a close look inside them for any debris or gunk that may have gotten in there that could be interfering with the charging process.

After inspecting the port, if you think you found anything that could prevent your AirPods from charging properly, don’t use a paperclip or anything sharp because that can cause problems with static electricity and it can do physical damage to your AirPod case or other components.

To clean out any debris from the port, use an anti-static brush. If you don’t have an anti-static brush lying around somewhere, which most people don’t, the next best thing you can use is a new toothbrush. Before you use a toothbrush, make sure that it has no moisture since this can cause serious damage to the internal components of your case. Make sure you gently brush out using a circular motion.

1. Go to the Settings on your iPhone.

2. Tap on the option Bluetooth.

3. Under My Devices tap the Information button, an ‘I’ enclosed in a circle beside your AirPods.

6. Doing this will un-pair the AirPods from the device.

7. Now the first part of un-pairing is done. Next, you need to put the AirPods in the charging case and make sure they are fully charged. Reconnect your AirPods by following the given steps.

8. Open your AirPods charging case next to your iPhone.

9. Tap Connect on the Control Centre pop-up that appears.

10. Once connected, see if both the AirPods are functioning properly.

Get the AirPods Replaced:

Since replacing your AirPods is the fix you probably didn’t want to hear, if you’ve found that your AirPods are damaged, you’ll need to get them replaced.

You can replace your AirPods with the new AirPods Pro (view on Amazon). It’s more reliable and doesn’t have issues like the first generation of AirPods. Upgrading your AirPods to new versions will eliminate the battery-draining problems you’re experiencing.

Suck Out The AirPod Ports

Now this one might sound weird, but one thing that could help with this problem is to suck out the AirPod ports on your case. The case’s ports can be filled with all sorts of junk and one way to easily get rid of debris that could be trapped inside there is to suck it out. To do this, you just need to plug the ports with your mouth and such hard. This works well if you don’t have any compressed air to blow it out.

If you have tried all the steps and one AirPod still drains faster than the other, then it looks like there’s a deeper issue that can’t be resolved with troubleshooting steps. In this case, you’ll need to contact Apple support to get this fixed. This is likely to happen after many years of having your AirPods so don’t be taken back by the unfortunate situation. After about 3 years of having AirPods, whether that’s the Pro or the first-gen, problems start to occur. Usually, this is with the AirPods themselves but problems can still occur with the case.

Most Airpods have a full-year warranty so if you have to take them to the Apple store, you will most likely get them replaced for free. On the website when it comes to selecting the problem that you have with your AirPods.

Firmware is the software that is placed in your AirPods and you can update it to get rid of problems such as one AirPod losing battery quicker than the other. Having old firmware can cause charging problems so it’s best to keep things up to date. Your AirPods firmware should be up to date and this should be done automatically, but if it’s not, then you can do it manually using a very straightforward process.

Before you can update the firmware to try and fix the charging problem, you need to make sure your Airpods are connected to your iPhone. You can check this in Bluetooth in Settings.

If you want to update them, make sure they’re first connected to the device then you want to plug the charger into the case and close it. Once this is done you need to leave the AirPods overnight and wait for them to update. Unfortunately, there’s no other manual step that you can carry out to update them so you’ll just have to wait.