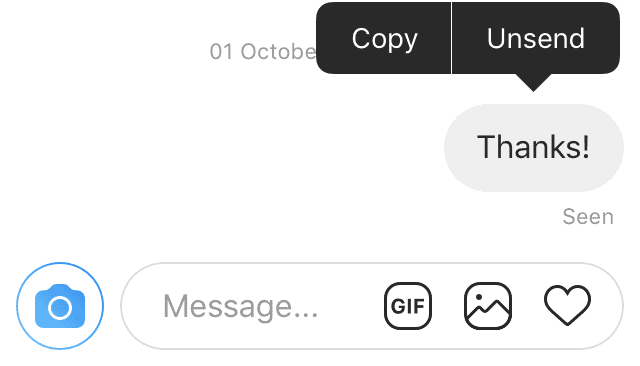 You’ve just sent a message on Instagram and then unsent it, and now you’re wondering if someone can see this message in their notifications or their inbox.

You may have just sent a cringy message, and you want to know if people can still see it after you’ve deleted it – everyone’s experienced this problem, so you’re not alone.

Does It Notify When You Unsend a Message on Instagram

If someone has unsent a message from your chat on Instagram, there are ways to see who unsent it.

Back in the day, you’d receive a notification saying, ‘This message has been unsent’ rather than the DM notification just disappearing. Instagram changed this because they didn’t want to leave any traces or open up chances for anyone to be confronted about what they unsent.

If they manage to open the DM while you’re unending it, once they land on the conversation page, they will see anything when they open your chat – it will look like nothing was ever sent. This means that the person you sent it to would never be able to know what you sent them unless they saw the actual message or the notification before the message was unsent.

How to Unsend A Message On Instagram Before They See It

If you’ve just sent a message on Instagram and don’t want the other person to see it, you’ll need to know how to unsend that message quickly. The quicker you unsend the message, the less likely they will know that you sent it. Although there are ways for them to see that you unsent a message, the best thing that you can do for yourself is to unsend it as quickly as possible.

Unsending a message on Instagram is made simple, and the process works pretty much how most unsending processes work.

1. Open Instagram and make sure that you’ve already logged in. You won’t be able to unsend messages on a PC, so bear that in mind.

2. Click on the Home button in the bottom left corner and tap on that airplane icon in your feed’s top-right corner. It will display a list of your conversations.

3. Open the conversation that you want to unsend the message for.

4. Press and hold on the message and select Unsend when it pops up just above the message. You’ll get a pop-up message asking if you’re sure you want to unsend the message.

This pop-up will warn you that the message will be removed for everyone in the chat. You’ll also be warned that the receipt may have already seen the message and kept evidence of it, so unending it might be useless.

It’ll only give you peace of might if you think that they haven’t seen it, and this is if they told you that they hadn’t seen it. You can erase the physical evidence from their DMs, but you can delete screenshots or the memory of the message you sent.

Once you’ve clicked Unsend, the message will be gone instantly. There will also be no signs of a message being unsent such as a message saying You Unsent A Message like Facebook does with Messenger.

Once you’ve unsend a message, you can no longer restore it so make sure it’s not something you’d need to keep as evidence. If you’ve wondered if you can unsend multiple messages at once, not that you can’t do this, there is no bulk unsend feature that Instagram provides.

After the message has been unsent, if this is your first time unending a message, you’ll get another pop-up letting you know the message was unsent. Once you’ve unsent a message for the first time, this is reset each time you delete and reinstall the app, and you won’t ever see it again.

The pop-up says unsent messages may still be included in the conversation gets reported — just because the message was unsent, you shouldn’t act as if the DMs is a consequence-free zone because there can always be evidence of what you said.

After you’ve received the pop-up for the first time, from then on, if you want to unsend a message again, you’ll be able to do so without the pop-ups. Instagram just wants to be sure you know how it works.

Sometimes, your message may not have even been sent in the first place, so you don’t need to freak out until you can confirm it was sent. When you send someone a message on Instagram, there are a few things that you need to look out for. The main one is that your message was delivered.

To check if the message you’re worried about was delivered, you need to swipe life on the message to open up more information about it, then look for the delivered arrow with the time stamp next to it. This will let you know that the message was sent so you can start the process of unsending it.

Another thing you need to look out for is if you swipe left on it and it says sending. This means that the message hasn’t been delivered, and there’s no way to prevent it from sending or to unsend it until it has been delivered.

If your DMs fail to send, you need to check your internet connection. Once the message has been sent, then you’ll be able to unsend it.

What Happens When You Unsend A Message On Instagram

When you unsend a message on Instagram, a few things can go on in the background that you might not be aware of. You might be anxious that they saw the message before they unsent it, whether they received a notification about it, or if there’s a way that they’d know if a message had been unsent.

There are quite a few questions that can circle your mind when you’ve sent something that you didn’t mean to, and knowing exactly what happens when you’re in this situation can help calm your anxiety.

If I Unsend a Message, Will the Other Person See It In Their DM

When you unsend a direct message on Instagram, the other person won’t be able to see it in their DMs. Unsending a message doesn’t archive it. It fully deletes the message from you and the other person’s Instagram, so they’ll never see it again.

However, deleting your chat doesn’t delete the chat for the other person. When you delete the whole chat between someone else, they can see the chat because it’s been archived on your end, not theirs.

The only way someone can see that you’ve unsent a message is that they’re on the chat, and they see the message disappear when you unsend it. The only way that you’ll know if they saw you unsend it is if they read the last message you sent, then you unsend it as soon as it said read by them. You can’t do this if the previous message that was sent wasn’t by you.

This Message Has Been Unsent Meaning – this was the notification that Instagram used to show to users when someone sent them a message and the person unsent it. This message is no longer shown, so when you unsend a message, they won’t know about it unless they saw the message originally.

This means that there’s no trace of the message anywhere.

If They Saw The Message, There’s Nothing You Can Do

In many cases, the person would’ve seen the message before you unsent it, and there’s not much you can do about it. If you were having a conversation with this person before sending the message, then the chance that they saw it is very high. This is because they were probably on their phone when you sent the message so that they would’ve received a notification about it.

Since they’ve received a notification, they’ll see it for a split second before you unsend it. Notifications disappear when you unsend a message, so you shouldn’t worry about the message staying in their notifications once you’ve unsent it. If this is the first message that you’ve sent them in a while, then there’s less of a chance that they saw the message.

Unsent Messages Can Still Be Reported

Suppose you find out more about Instagram’s rules regarding unsending messages. In that case, there’s a clear message that says if someone decides to report a specific message you sent or conversation, your unsent messages will still be included in that report, provided that the report was made within 14 days of the message being unsent.

This means that your message hasn’t completely gone from Instagram’s records until a certain point. So if you have said something that could incriminate you, then they still have a chance to report the message you unsent because Instagram won’t remove it from their database until a while.

Is There A Time Limit For Unsending DMs?

There is no time limit that Instagram gives you to unsend a DM. But the time that you take to unsend one is crucial because it can determine if someone saw it or not. If someone didn’t see the message, then you can take forever to unsend it, but bear in mind that the longer you take, the higher the chance that they’ve seen it.

If they’ve already seen your message, then there’s no point in taking your time to unsend it. They’ve seen the message regardless of whether you’ve sent it. Unsending it will only prevent them from getting proof that you sent the message if they don’t have proof.

How Can Someone Know If You Unsent A DM

They’ll know if they’ve seen the message and it’s suddenly gone. When a message is unsent, it disappears as soon as you unsend it, so if they’re on the chat while you do this, then they’ll know that you’ve done it. Another way they can tell is if they see the notification; when they go on the chat, the message is no longer there.

When you click the unsend button to unsend a message on Instagram, an error can stop the message from being sent. The main reason that will prevent you from unending this message is that you have no internet connection or that Instagram has blocked you from this action.

The first thing you can do to fix this is to change from WIFI to data. When you change from Wi-Fi to data, you’re switching to a reliable internet source. If there was something wrong with your WIFI, switching would help you get rid of this issue, and it will allow you to unsend the message in your Instagram DM.