Home Social Media Snapchat What Does Recents Mean on Snapchat 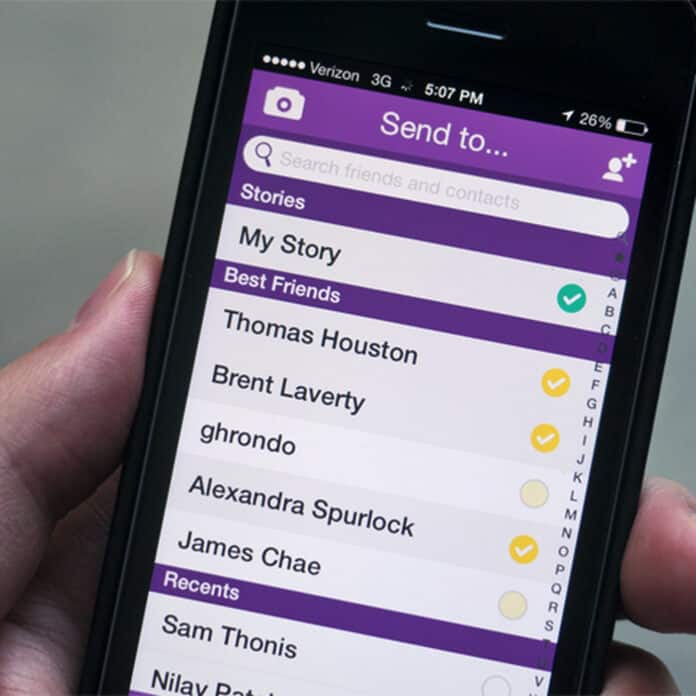 The conversations list shows up the most recent chats you’ve been having with people, and when you’ve had a conversion in the past with someone, an arrow will either show up which means that they opened your message and didn’t send one back or a box will show, this indicates that you opened the message last and didn’t say anything to them. When you want to send a snap, there’s also a recent section that shows you all of the most recent people you’ve been messaging.

What Does Recents Mean on Snapchat

There can be people in your recent list that you’ve never spoken to, or if you’ve spoken to them relatively recently, they’re just not meant to be on that list since it doesn’t fit the chronological order pattern.

If the list recent list is wrong, it means that people have been removing you on Snapchat. If they haven’t removed you and you can still see their Snapchat score, then chances are that there’s a bug within Snapchat that’s causing random people to appear in your recents list.

Why Is Someone Showing Up In Your Snapchat Recents When You Haven’t Spoken To Them?

If someone is showing up in your recents when you haven’t spoken to them, it is usually because they remove you as a friend. The second most common reason is that you just added them as a friend. If none of these are true, then you need to troubleshoot Snapchat for glitches and get to the root of the problem.

1. They’ve Removed You As A Friend

If someone is showing up in your recents and you haven’t spoken to them in several months/weeks or you haven’t spoken to them at all, it’s because they have removed you as a friend. When someone removes you as a friend, their name will come up in your recents to let you know that something recent has happened with that contact.

3. You Don’t Speak To That Many People

4. They Replied to Your Story

5. Snapchat is Bugging Out

Another common reason why you’re going to see someone in your recent conversations is that Snapchat is bugging out. Snapchat is known to commonly glitch and bug to show things that are not meant to be there. If someone is in your recent and it’s not for one of the reasons above, then it’s because there’s an issue with Snapchat.

6. They Messaged You Then Deleted It

If the messages you and then deleted it, they will appear at the top of your recents list but you’ll still receive a blue chat from them. When you open this message, you should be notified that they deleted their message. If they’re at the top of your conversations list but there isn’t a blue chat to be opened, it looks like they’ve appeared there for other reasons.

How to Delete Recents on Snapchat?

If Someone Removed You From Recents, Check Their Snapscore

If you’re seeing someone in the recents list, it usually means that they’ve deleted you. The best way to check if this is the case is to check their snapscore. When you’re looking at the friendship profile of someone and you can’t see their scapscore, it means that you’ve been removed. If you have been removed, this is why they’re on your recents list. 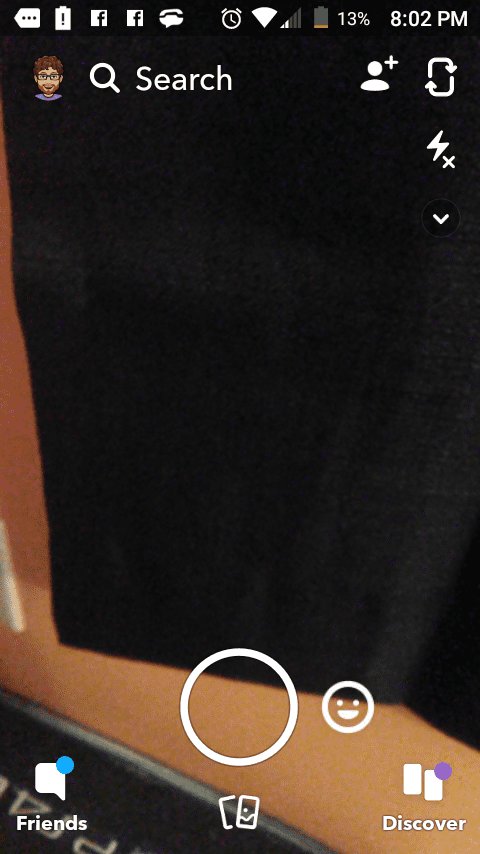 2. Open up the ‘Friends’ page or recents list. You can swipe right while you’re on the camera screen to open the Friends list or you can simply tap ‘Friends’ at the bottom left corner of the screen. It’s a small chat bubble icon labeled ‘Friends.’

3. In your list of friends, locate the person you think may have deleted you on Snapchat and select their name by tapping and holding your finger on their name. This will open a window of options. 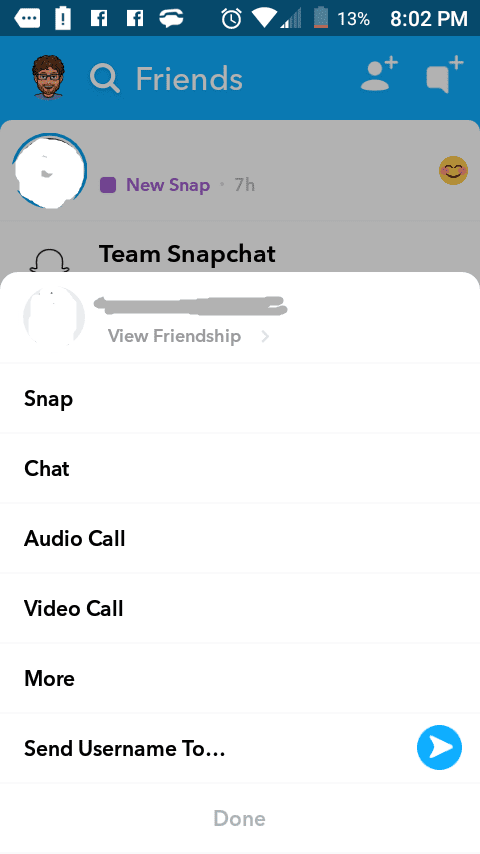 4. In the list of options, tap ‘View Friendship’ at the very top of the list just below the person’s name. You’ll get redirected to their profile page. 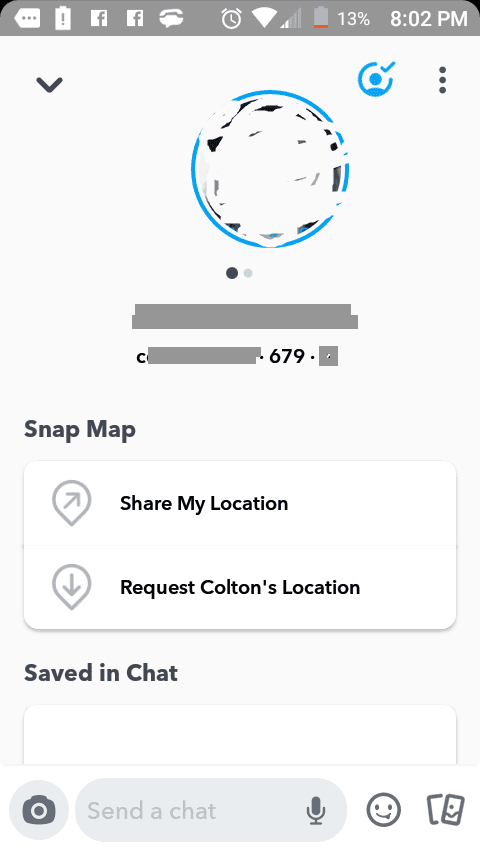 However, here’s the catch: you can’t see the snap score if they aren’t friends with you. So, if you don’t see one, then they’ve deleted you on Snapchat. and this is why they’re appearing in your recent conversations.

What To Do If Snapchat Recents List Is Wrong

If the recents list is wrong, it’s likely that your Snapchat is experiencing a glitch or bug that’s causing someone you haven’t spoken to to show up on your conversations list. There are a few ways that you could get rid of a glitch to fix the persisting problem with Snapchat.

The first thing you need to make sure of is that Snapchat isn’t wrong about your recents list. You fully need to asses whether this person has removed you. When someone removes you, Snapchat notifies you by sending them to the top of your recents list even if you haven’t spoken to them recently. If you can see that the person clearly hasn’t removed you, it’s safe to say that you can put it down to either a glitch, or they’ve recently added you.

Check if Snapchat Servers are Down

If someone hasn’t removed you or they haven’t added you, then there might be a glitch within Snapchat and sometimes this can be caused by Snapchat servers being down. Snapchat usually does routine maintenance and when they do this, there might be issues with Snapchat.

When Snapchat is down due to routine maintenance, you’ll see a rush of complaints on social media with everyone having the same issue. To check whether Snapchat Servers are down, you can easily do a search in Google saying, ‘is Snapchat down’.

You see a few news websites saying Snapchat servers are down. If you are active on social media, you’ll either see your friends talking about it, or you can go to the Instagram search bar, type in Snapchat, then click on tags.

You’ll see posts saying things such as “is your Snapchat working?”. If this is the case, you’ll have to wait for their servers to go back online. This can take up to a few hours but once it’s done, try going back to Snapchat to check your conversations list. You should notice that the person you haven’t spoken to will be gone from your recents list.

The next step you want to take when people are on your recents list when you haven’t spoken is to ‘Reset Network Settings’. There could be a network problem that’s causing Snapchat not to work properly and wiping that on your iPhone or Android can fix the problem.

If you know your WI-FI is working properly but Snapchat isn’t working regardless, you’ll have to reset your network settings.

If you want to reset all of your network settings:

Resetting your network settings is going to clear all the settings you’ve made since you got your iPhone. Your WI-FI and mobile data settings will be reset.

When your iPhone boots back up, you’ll need to go back to settings and enter your WI-FI passwords. Once you have done this, go back into Snapchat and see if your recent list is correct. If there’s anyone on there who you haven’t spoke to recently, they haven’t removed you, or they haven’t added you recently, then it looks like a glitch is still persisting.

Update Snapchat If One Is Available

Another way to get rid of any glitch on Snapchat making the recents list wrong is to update the app. When there is an update available for Snapchat, it’s likely that there is a bug in the current version you’re using. New updates are made to fix bugs and to add new features. If you’re not using the current version of Snapchat, you can run into a lot of problems.

Here’s how to update Snapchat if there’s one available:

Once you’ve updated the app, open Snapchat to see if Snapchat someone is still in your recents.

If none of the steps above have worked, you can go ahead and Delete the Snapchat app.

The problem may be within Snapchat itself so deleting and then re-installing it will refresh the app and solve any issues within the app.

To delete and then re-install Snapchat:

Once Snapchat is installed, try and log into the app and see if the recents list is still incorrect.