Home Fix iPhone & iPad Phone Only Charges at An Angle? Try These 10 Fixes 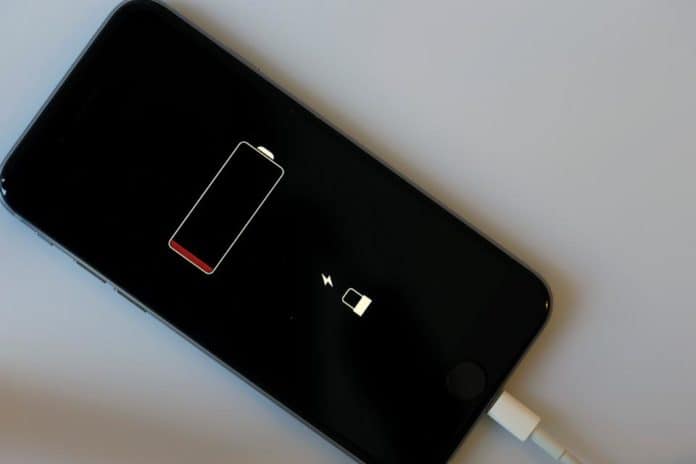 To get your iPhone or Android to charge with the lightning connector, you have to constantly tweak the angle of the charger just to make sure it hits the right spots in the port. In most cases, as soon as you start to notice that your phone only charging in certain positions, you’ll sooner or later end up having to replace your lightning cable. If your phone is only charging at an angle, there are a lot of reasons that could cause this issue to happen.

Why Does My Charger Only Work at A Certain Angle?

The main reason this is going to happen is that either the cable/connector on the charger is faulty or the connector/socket on the phone is damaged. If the connector is damaged, it won’t be able to charge your iPhone only when at an angle. This means that you’ll need to go and get your cable replaced.

Another reason why your phone won’t charge unless the charger is plugged in at a certain angle is that the charging port inside your iPhone or Android is dirty and you need to clean it out.

The last reason why your phone only charges in a certain position is that your charging port is damaged. It could be damaged from water or you dropping your phone, despite how it was damaged, your lightning cable will only be able to work when it’s placed at an angle. This means that you’ll have to get your iPhone’s port fixed.

If your charger was working then soon after it could only charge in certain positions, chances are that your charger is not MFI certified meaning that it’s counterfeit. If it is counterfeit, in most cases you should be getting the ‘This Accessory May Not Be Supported’ message.

If the wall socket that you’re trying to plug the charger into is damaged, then your charger might only work in certain positions.

If this is the case, try plugging it into another wall socket and see if you don’t have to bend the charger in a certain way that’ll allow it to charge. Sometimes wall sockets can be old or faulty and this can affect anything that’s plugged into it.

If the plug you’re using to plug the cable into is damaged or faulty, it can cause problems when comes to charging your phone. Sometimes your plug can wear over time and this can translate and show when it’s time to charge your phone.

It’s unlikely that the plug is what’s causing you to bend your charger at an angle so that your phone can charge. You can test it out by using a different plug.

If your iPhone won’t charge unless at an angle, then you need to find where the problem is, whether that be at the charger level or the port level. Once you’ve found the problem, the easiest way to fix it would be to replace it but if there’s dirt surrounding the area, then you’ll need to get it cleaned.

Since the most common reason why your phone only charges at a certain angle is that there’s a problem with the lightning connector, if your goal is to stop this, you’ll need to replace your iPhone cable. As soon as this problem starts to happen, the quickest way to stop it would be to get your iPhone cable replaced.

2. Check If Your Charger is Plugged in Correctly

The charger has two parts: the part with the charging brick and the part that has the part you stick into the port. Make sure that these two parts are attached correctly and snugly so that charging can occur. If these aren’t pushed together snug, then you might find yourself moving the charger at a certain angle so that it charges.

Part of making sure your charger is plugged in correctly is also ensuring that your charger’s plug is firmly nestled into your wall outlet. If it isn’t plugged in all the way, then you’ll find bending the charger at certain angles so that it charges.

You’ll need to check if your wall outlet is the issue if you’ve checked that the port and charger aren’t. See if your charger works in a different wall outlet. If the outlet was the issue, your device will begin charging without you having to bend it, but if it doesn’t, then your port or charger might be the issue.

3. See If Your Charger Has Any Kinks

Checking the integrity of your charger is very important. If your charger has any bends or kinks, then this might be what’s stopping it from charging without you having to bend it.

Use your fingers to feel along the cord of the charger and look for any places where there might be a bump or break inside of the covering.

If you notice any of these disruptions in the cord, then this is evidence that you need a new cord. If you notice nothing wrong with the charger, then check the port of your phone and the outlet you have it plugged into.

4. Make Sure the Port is Clear

Shine a light into the port to ensure that there’s no debris in it. Debris can collect in the port when you have in your pocket or while it’s lying around on your desk.

Blow into the port to see if you can clear it. If not, you can use compressed air using a mini vacuum (view on Amazon) to clear your port. Also, ensure that the cable is cleared before you put it in the port. Make sure it’s not wobbly and has nothing obstructing the inside of it.

5. Clean Out the Charging Port

The first step to take in this position is to clean out the charging port. This solution is by far the best solution when it comes to fixing this problem. As said earlier, if your iPhone or Android is only charging at an angle, the main reason is going to be because the data port is filled with dirt.

If you’ve ever looked inside your jean pockets, you’ll know that you’ll find some grey fluff in there. This is called lint and it isn’t iPhone friendly. Lint can block the connection between your cable and charging port.

There is also a plethora of micro items that can get stuck in your port and this will stop your device from charging. Before you try cleaning this out, you need to know that you shouldn’t use anything metallic to clean out the port. If you use anything metallic, this can conduct an electrical charge inside your charging port.

If you haven’t got an antistatic brush, the best thing to use is a new toothbrush. If you use a brush that has any type of moisture, I can guarantee you that you’ll damage the data port.

Don’t try and clean the port with anything that can get stuck in there because this will be tricky to get out. After you’ve cleaned out the data port, you should now plug your charger in and see if this solves the problem.

If your iPhone is now charging regardless of any angle it was placed in, this was what was causing the issue and you can use your device freely now.

6. Get an MFI Certified Cable

The next solution to fix this problem is to use an MFI certified cable. If you’re using a fake iPhone cable, this is going to stop your iPhone from charging properly.

MFI certified means that the cable meets Apple standards, and this is given to certain manufacturers of iPhone cables.

So, how do you know if the cable is fake? If you still have the box the charger came in, you can look for the ‘Made for iPhone, iPod, iPad’ logo. This is why it’s called MFI. You can also tell if your charger is fake by looking at the cable itself.

It feels thin and it doesn’t feel rubbery or you can’t feel it grip to the cable, it’s most likely fake. You can buy real iPhone cables from certified stores. You can also purchase them from Amazon or any store that’s near you. Don’t go to a convenience store because there’s a chance this is going to be counterfeit.

Since replacing your charging port is the fix you probably didn’t want to hear, if you’ve found that your chargers are only working at a certain angle and you’ve boiled the problem down to the port after cleaning it, you’ll need to get it replaced.

If you have experience with repairing iPhones and you have the appropriate tools, you can replace your charging port. If not, you’ll need to go to the Apple store and get your charger fixed.

When you’ve taken your device to the Apple store, the repairing procedure is simple and only involves removing the only charging port and replacing it with another charging port.

This is going to cost you a good amount depending on the phone you have, but it’s the only place you’re going to get it don’t properly. If you go to a thrid party store, it’ll void your warranty and they might do shady things such as steal parts from inside your iPhone.

If you are still using an old version of OS while a new update is available then this could well be the reason why phone charger only works at a certain angle. Updating an OS automatically addresses the software bug issues and the device starts working fine.

Additionally, if you have just recently updated your OS and your phone won’t charge unless the cable is at a certain angle, then you should close down all the running applications and restart your device.

Since software crash happens quite often in iPhones and Android, it is very likely that your phone might not be charging properly after a software update. If you feel that your device has stopped charging for no particular reason then resetting it is the best option.

Hard reset is quite similar to restart. You won’t lose any of your data and hence you don’t have to create a backup before resetting your device. It will only freshen up your device by relaunching the apps running in the background.

Press-hold the sleep/wake button in tandem with the volume down button for at least 7-10 seconds. Do not release them until the Apple logo appears on the screen.

Now it’s time to move into dangerous territory. Believe it or not, malware can be the culprit. While it is less likely than the solutions and possibilities listed above, it’s still something you should look into.

Malware commonly affects the functions of devices, especially in terms of power. When malware is constantly sending information about your phone to some foreign server, that’s draining your battery. On top of that, it can prevent certain functions from taking place, such as your phone being able to charge properly.

If you don’t already have one, invest in an antivirus application. Here’s a few suggested apps you can pick up for Android: