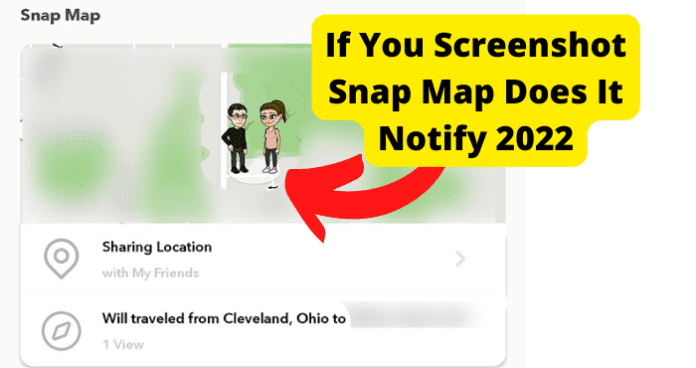 If you’re wondering if Snapchat notifies screenshots, there are a few things you should know.

If You Screenshot Snap, Map Does It Notify

To answer this question directly, the answer would be no. If you screenshot someone’s bitmoji on Snap Maps, Snapchat will not send them a notification.

There are many social media applications out there that will immediately notify you once particular actions are performed. If you like a post, if you post a comment, and if you create a post, your contacts will be notified of this action.

Can You See Who Screenshots Your Bitmoji on Snap Maps?

There are many users who would consider this to be an invasion of privacy if they were not able to know who took a screenshot of their bitmoji or location.

It can be a little unsettling. However, there is little that can be done when someone takes a screenshot of your bitmoji. So, to reiterate again, no, you will not have access to this information.

Can Someone See If You Screenshot Their Bitmoji on Snap Maps?

This is something that would be rather contradictory if someone was able to see if you screenshot their bitmoji, but you’re not able to see who screenshots yours.

As it was stated earlier, there are many people who want to know if someone has taken a screenshot of their bitmoji. This is a feature that is a part of Snapchat where if you were to block a user, they would still be able to see your location on Snap Maps.

You may be able to remove them from your friend list on Snapchat. However, on Snap Maps, your location will still be available to view.

Some people may be wondering why their location will still be available to view once they block someone. Well, when you are on snap maps, it is different than interacting on Snapchat.

You are not directly interacting or messaging anyone on Snap Maps, just like you would do on Snapchat. So, when you are viewing locations on Snap maps, that’s just it. Snap Maps allows you access to filter certain locations to locate other Snapchat users.

So, when someone opens Snap Maps, and they are searching locations of other snap users, your bitmoji will show up.

Although it can be a little unsettling not to know if someone took a screenshot of your bitmoji on Snap Maps, you still have access to the block feature on Snapchat if you come across a person or people that make you feel uncomfortable.

So, to answer this question directly, no, Snapchat doesn’t know when you have taken a screenshot of someone’s bitmoji on Snap Maps.

Once again, although there are social media applications and services available out there that will provide you with in-app notifications once certain actions are performed, snap Maps doesn’t have a particular feature that allows that.

So, once you take a screenshot on Snap maps, that’s all there is to it. This screenshot is taken, and the image is saved to your phone’s gallery immediately.

How to Screenshot on Snap Maps

Taking a screenshot using this feature is as simple as one, two, and three. So, for all of the Snapchat users who are not quite familiar with SNAP maps and want to know how to take a screenshot on Snap Maps, there are some quick essential steps available to do so.

In order for you to successfully take a screenshot on Snap Maps, you must proceed with the following steps:

1. First, you will open Snap Maps on your device.

2. Next, click on the bitmoji that you want to take the screenshot of. This bitmoji can be any one of your contacts.

4. If you are using an iPhone / iOS device, you will press the side button and the volume up button simultaneously. After the screenshot is taken on either your iOS or Android, a thumbnail will appear on the screen temporarily.

5. If you want to go ahead and view the screenshot, once the thumbnail appears on the screen, tap on it to open the full view of the screenshot that was just taken.

Knowing that you are able to see someone’s location on Snap Maps can be a little unnerving.

And although there are no internal resources for you to utilize for you to see if someone screenshots your bitmoji on Snap Maps, there are many people who want to know if there are any external third-party applications you can use to research this information.

Well, unfortunately, there are no third-party applications available on the market at this time.

If you are searching to figure out if someone has screenshotted your bitmoji on Snap maps, you may want to think outside of the box based on the technical resources you are looking to use to discover this.

In other words, since there are no third-party apps available to recover this type of information, you may want to connect and befriend someone who is a little more experienced in the tech world with uncovering these types of secrets.

But overall, there are not any third-party applications available for you to investigate this type of occurrence pertaining to your Snapchat / Snap Maps.

What Happens When You Screenshot Snap Maps?

Once you take the screenshot, the image is not tracked or documented in any way, shape, or form. The only paper trail that would be recorded of the image would be the image from snap Maps that is in your phone’s gallery.

So, when you take an image with Snap Maps, nothing special really happens.

As it was stated in this article, Snap Maps is an incredible extension of Snapchat that allows you to see where your contacts are. You’re also able to view the Snaps of people who are nearby in your area or from specific locations.

Although that is great, there was a question burning in the pockets of a lot of Snapchat users. And that question was, if you screenshot an image on Snap Maps, does it notify your contacts?

To reiterate that answer again, the answer is no. Your contacts will not be notified if you screenshot their bitmoji or location.

And even if you wanted to know if you’re able to see if someone screenshots YOUR bitmoji or location, the final answer will still be no. Overall, Snapchat will not show any images if you decide to screenshot anything from Snap Maps.

And last but not least, to investigate this question even further, there aren’t any third-party applications available to find out if someone screenshotted your bitmoji on Snap Maps.

So, for all of you Snap users who wanted to play CSI to see if someone tracked you, you’re out of luck with that one, my fellow Snap user.