Home How To Software & Apps Can People See If You Pin Them on Zoom? 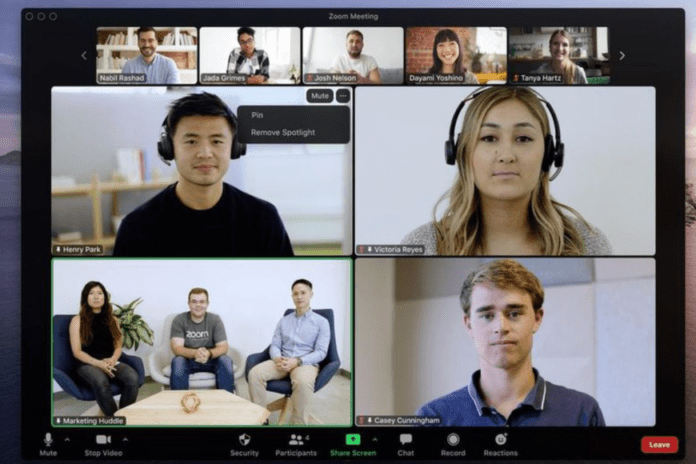 When using Zoom, you can magnify and center the video feed of a specific individual by using the Pin Video feature of the software. Other users are placed in the background of the gallery display on your Zoom desktop client so that you can concentrate on one specific user in this instance.

When a video is highlighted in a meeting or cloud recording, a user is designated as the principal active participant for all meeting participants. To spotlight, you must have at least three people in the meeting who have their videos turned on. The only person who can perform spotlighting is the host.

Can People See If You Pin Them on Zoom

However, there are ways you can tell you’re pinned. For example, if you’re watching their screen and they open your zoom and your stream is the biggest and centered while you’re not talking, they have you pinned.

Does Zoom Notify When You Pin Someone

Zoom doesn’t notify when you pin someone. If Zoom told people when they were pinned, users will be hesitant to pin people as they don’t know anything thinking that they’re weird for pinning them when there are multiple people in the Zoom call. It’s impossible for anybody to know they’re pinned from the app itself, but there are ways they can find out.

Is There a Zoom Pin Notification?

There is no notification for pinning on the Zoom app. Since it won’t tell them, it’s impossible for anybody to know they’re pinned from the app itself, but there are ways they can find out.

How to Know If Someone Pinned You on Zoom

If they aren’t careful, you can find out you’re pinned in a couple of different ways.

1. Cover your Camera with Your Hand Momentarily

If you have your webcam on in a zoom call, you may wonder if anyone has you pinned. Although there’s no notification or indicator from Zoom that your webcam stream is being pinned, there are a couple of sneaky things you can try to see if you are, in fact, pinned.

One is, if everyone has their webcam on, and some are in darker rooms where you can see the light of their computer on their face, quickly cover your webcam with your hand and take it back off.

If you see a drastic change in lighting on someone else’s video for a moment, and you made no noise doing this / you’re muted, there’s a high chance they have you pinned.

This is because if your video is bigger than everyone else’s from their perspective, the light coming from their monitor will mostly be from your screen, especially if they have zoom in dark mode.

This is useful but only in certain situations; if they’re not in a dark enough room you won’t see the difference in lighting, and if they don’t have their webcam on you won’t be able to see their lighting change.

2. Watch the Reflection in Their Glasses

If the suspected person has their webcam on and is wearing glasses, you may be able to see the reflection of their screen in their glasses.

If you can see this, you should be able to see if they have speaker mode on or not, meaning if their focused camera keeps changing, they don’t have anyone pinned. However, if their focus stays on you even while you’re not talking, they have you pinned.

If you’re the biggest video on their screen and you’re not talking, they probably have you pinned. However, if multiple people are speaking and their camera focus changes, you’re not pinned, since speaker mode is still on.

Just make sure you’re either muted or not making any sound when you watch their screen. If you do, the speaker mode might make your stream bigger on their screen and you may falsely think they have you pinned.

If you’re not the teacher or main person talking in the meeting and someone has you pinned, it’s possible they find you interesting or attractive. You could try simply asking them if they pinned your video.

In most cases, it’s probably better to do this after the class or meeting to avoid any awkwardness. You could mention it casually to them some other time, or just straight up ask after the meetings are over.

If they don’t give you a straight answer, they may still like you but don’t want you to know yet, or there may just be a completely different reason.

However, more often than not, if you’re not the main speaker of a meeting and someone pins your stream, they probably like you in some way.

What Happens If Someone Pins You?

Using the pin function on a screen, you can disable the active speaker view and focus on a specific speaker. Only your local view in the Zoom Room will be affected by pinning another user’s video; it will not affect the views of other participants or cloud recordings.

How to Pin Someone on Zoom

Following your realization that you have nothing to be concerned about when it comes to pinning someone’s movie, let’s look at how to accomplish the “pinning” that we keep talking about.

During a meeting with three or more participants, navigate to the video of the person you wish to pin in your Zoom desktop client and select the ‘More’ symbol (three dots) in the upper right corner of the video thumbnail to bring up the pin menu.

Then, choose’ Pin video’ from the drop-down choice that appears.

What Happens When You Pin Someone on Zoom?

Once you have pinned a video from a specific user, Zoom will automatically bring the video into focus for you. The other participants’ video feeds will be reduced to thumbnails in the background and minimized to the foreground. It will assist you in concentrating on a specific meeting participant, which is particularly important in the case of presentations and training.

How to Unpin a Video from Your Timeline?

Unpinning a video in Zoom is a simple operation that takes very little time. You should be able to unpin your pinned video by selecting it from the drop-down menu in the top left corner of the video. By clicking on this, the video will be unpinned and moved back into the gallery view on Zoom.

The Difference Between Zoom’s Pin and Spotlight Feature

You do not influence who is in the Spotlight at any one time. The only person who has power over spotlight users is the host. On the other side, you can control pinned users and pin people to the foreground as many times as you want.

The individual who is being spotlighted will be at the forefront of any video recording during a spotlight session. However, while you are recording pinned videos, you have the option to easily switch between front and backdrop speakers, which makes your recordings a much more engaging experience overall.

Pinning a video works between two users, allowing you to switch between active speakers with ease. On the other hand, Spotlight requires a minimum of three people to be present for the feature to function correctly.

While anyone can use the pin video tool during a meeting, the spotlight feature is only available to those hosting the event. It implies that individuals will not be able to alter their current speaker using Spotlight, but they will be able to use Pinning Videos to bring another participant into focus.