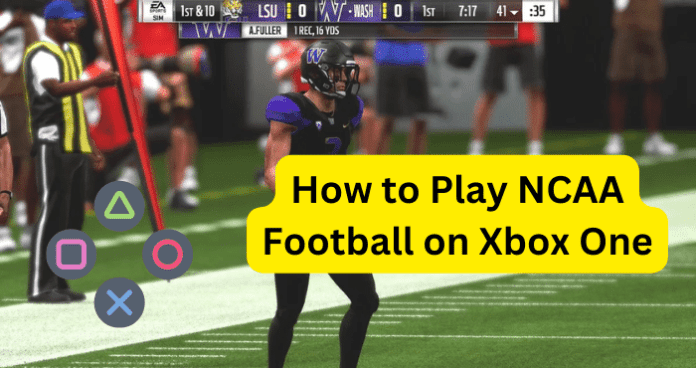 Many gamers and sports fans alike have been wondering if there is a way to play NCAA Football on the next-generation console, the Xbox One. We can help you to determine the best way to play for you.

In this article, you will find all of the information you need to know as to whether or not you can play the popular NCAA Football game on your Xbox One.

Can You NCAA On Xbox One?

No, unfortunately, there is currently no way to play NCAA Football on the Xbox One console, NCAA Football was the last entry in the popular college football gaming series.

Unfortunately, due to the controversy and licensing issues that surrounded the use of college football players’ likenesses, the series was forced to end its run. The last consoles that you can play NCAA Football on are the PlayStation 3 and Xbox 360. It has since become one of the rarest and most sought-after out-of-print games on the market.

While some copies can still be found on websites such as eBay and from third-party sellers on Amazon, it will cost you a pretty penny to get your hands on the game.

Astoundingly, some copies of the NCAA Football game have reached prices upward of $150. Along with the game series not being developed anymore, one of the main reasons for the increase in price for NCAA Football is the in-game roster updates and modifications that have been added by avid gamers to keep the game going.

Some gamers in the NCAA community have come together to add updated rosters, menus, and other quality-of-life fixes to the game over the years. The latest major game update came in January 2020. This update included reskinned menus, updated fields, and additional uniforms and patches.

This may be hard to read; however, there is simply no way to play NCAA Football on the Xbox One console. If you wish to play the frequently updated NCAA Football, then you will need to use either an Xbox 360 or a PlayStation 3 along with a physical copy of the game.

It should be mentioned that you can no longer download a digital copy of NCAA 14 from the Xbox marketplace. You can purchase a digital copy of NCCA 14 if you have a PS3, but you should also expect the process to be more difficult than other online game purchases.

Due to a lack of updates for the PS3 store, you will not be able to use PayPal or credit cards to make your purchases.

There has been word that NCAA producers EA Sports is currently working on a new installment to the college football series. However, when word got out that the game should be expected in 2023, EA Sports actually confirmed that this was just a rumor, in actuality the developers expect it to be available in the year 2024.

If you would like to keep up with what is going on with the newest NCAA Football game to be released in a couple of years, you should follow and keep an eye on their social media accounts.

You may be thinking, “Well, I can just use my jailbroken Xbox One to play Xbox 360 games.” when an Xbox One is jailbroken, it allows users to access special settings and play games they do not own or in this case, a game that is not available for Xbox One; sadly, not even this will work.

While you may be tempted to hop onto EA’s streaming service “EA Play,” unfortunately, the game is not available there either. The NCAA series has been discontinued and will not release another entry on future consoles.

You may also be tempted to modify your Xbox One console to play other games; however, it is not advisable to do so to simply play NCAA 14.

Modifying or jailbreaking your Xbox One console can cause internal damage or software corruption that could render your system inoperable. So, unless you have the proper experience, you should not modify your gaming console.

If you are in the market for an Xbox 360, you can easily pick up a used one on eBay, starting at $50 to $90.00 (US). The higher-priced used consoles typically come with a couple of games, though it is unlikely for you to get NCAA 14 at random.

Since the game is considered rare and sought after by many sports-loving gamers. So, if you do wish to play NCAA 14 on your Xbox 360, you will also need to track down a hard copy of the game, which can not only be difficult but it can also get quite pricey.

How To Play NCAA Football On Xbox One

Unfortunately, there currently is no way to play NCAA 14 on the Xbox One console. Also, rather unfortunately, NCAA 14 Football was the last entry in the popular college football gaming series.

This unfortunate state can be attributed to controversy and licensing issues that surround the use of college football players’ likenesses, the exciting football series was forced to end its run.

The only consoles that you can play NCAA Football 14 on are the Xbox 360 and the PlayStation 3. Once again, this is what makes NCAA 14 such a sought-after out-of-print game on the gaming market.

As previously mentioned, the price for NCAA Football 14 has risen greatly; however, you can still purchase the game on websites like eBay and from third-party sellers on Amazon.

Some good copies of the game can reach a mind-boggling price of $150, and the price is likely to only rise. Especially with the next NCAA Football game expected to be available in 2024, it is also likely that sellers will be gradually raising these prices in light of the hype.

With modders adding more updates somewhat regularly, you may feel the push to be able to play NCAA Football 14 on your Xbox One, but this is simply not yet possible.

What Consoles Can You Play NCAA On?

The only two consoles that you can play NCAA Football 14 on are the Xbox 360 and the PlayStation 3.

Sure, both of these consoles were released several years ago; however, if you want to be able to play NCAA Football 14, you will need one of these two consoles. Generally speaking, You can find both a used Xbox 360 and PlayStation 3 for around $75 each.

These consoles, while out of production, did not see any substantial increase in price due to perceived collectability. As previously depicted, you can find used gaming consoles on eBay or at local aftermarket stores in your area.

While it may be troublesome, these two consoles (Xbox 360 and PS3) are the only ways to play NCAA Football 14. Also, you may be able to locate an emulator on a PC that will allow you to play Xbox 360 or PlayStation 3 games. Emulators are quite popular and give gamers a way to play console-only games on PC.

Unfortunately, you will not be able to play NCAA 14 on PS4, Xbox Series X, PS4, or PS5. The NCAA 14 game will not be available for digital purchase on these consoles and will not be compatible with the physical disk versions of the game.

This is why we encourage you to consider purchasing an Xbox 360 or PlayStation 3 so that you can play NCAA Football 14. Keep in mind, that it has been confirmed that NCAA producers at EA Sports are working on a new college football series, which is expected to be released in at least 2024.

Remember, that you will not be able to use a jailbroken Xbox One to play Xbox 360 games. While in some cases Xbox 360 games are compatible with Xbox One, it will be very difficult to get your hands on a physical copy of NCAA Football 14.

You will also find that you will not be able to get an emulator to run properly on your Xbox One, which is because of the limitations of the system, you will likely not get any emulated games in a playable state even if you were able to properly install one.

Remember, that the NCAA Football 14 game is also not available on EA’s streaming service “EA Play.” Unfortunately, the NCAA series has been discontinued, and will not release another entry on future consoles. You could modify your Xbox One console; however, this is not advisable since you could damage your software and more.

Modifying or jailbreaking your Xbox One console can cause internal damage or software corruption that could possibly end in your system becoming inoperable.

If you do choose to emulate the NCAA 14 game on a PC, you might find that you do not have access to the user updates and patches that are available for the console version of the game.

Since the NCAA community on console has stayed on top of adding new content, quality-of-life updates, and roster information, it is generally thought of as the definitive way to play. On an emulated PC version, you will only have access to the base version of the game.

It is rather unfortunate that NCAA 14 enthusiasts will likely have to wait until 2024 until they can play a newer college football game; however, once the release date comes, you should be ready to go grab your copy.

Since there are likely to be many avid NCAA gamers eagerly awaiting its arrival. While it is a real bummer that you cannot play NCAA 14 on Xbox One, it is not so bad that you can still play it on an older console such as the Xbox 360.

While it can be very difficult to get your hands on a copy without paying an arm and a leg, it is still possible. Gaming consoles are evolving with each generation, so it is not crazy to think that there may be a console someday that you can play almost any game on.

We hope you found the information in this feature helpful and if you did, consider sharing this article with a friend or family member that may be wondering the same as you.