Home Do More Gaming How to Play NCAA Football on PC 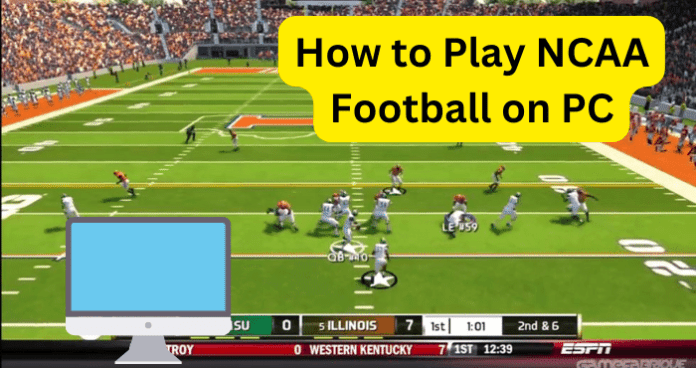 If you are a millennial or even generation Z, you may have fond memories of playing NCAA Football 14. As of July 2013, the college football series has since been discontinued, which is mainly due to not just licensing issues but also lawsuits over the commercial use of college players’ likenesses.

With the football title being difficult to find hard copies of and the price for the said copies skyrocketing, many people who want to scratch that nostalgic itch have been seeking out alternative ways to play. This brings us to today’s feature, folks want to know if they can play NCAA Football 14 on PC.

Can You Play NCAA On PC?

Fortunately, yes, you can play NCAA Football 14 on PC. As previously mentioned, the NCAA Football 14 game has become quite sought after, ever since EA Sports terminated the development of the college football series Now, there has been confirmation from EA Sports that there is actually going to be a new installment to the college football game series.

This new game is reported to be an exclusive for PS5 (PlayStation 5) and the Xbox Series X|S, and it is also reported that it should be released next year (2023); however, it is very likely and accurate to say that it will be released in 2024.

It is also likely that as a kid you probably spent countless hours playing NCAA Football 14 and lucky for you, the game has not been lost to the sands of time. Sure, you could hop onto eBay or a similar site and pay up to $400. (US) for a hard copy that is only playable on PS3 and Xbox 360.

Though why would you do that when you could play it for free on your PC? Yes, you read that right, you can play NCAA Football 14 on your PC for free. You can thank this incredible age of technology we live in today for this opportunity.

Not only is it quite fantastic that you can play NCAA Football 14 on your PC, but it has also received updates to the game from dedicated modders and gamers alike. These updates include features such as college football teams that were not in the original game or have also been dropped from division 1 football.

If that is not enough, other updates to the revamped NCAA Football 14 game also include new players from different teams and likely your favorites, new uniforms, along with new rosters, stadiums, and even new plays.

With the NCAA Football 14 revamped, you can expect to be able to play the same players, plays, and stadiums that you played when you last played the game in its hay day. With the new NCAA Football game in the works, you will want to get all warmed up on clever plays to conquer the opposing team.

You may be wondering, “What will I need to play NCAA Football 14 on my PC?” Lucky for you, we have the answers in this guide, which you will find below.

What Do You Need to Play NCAA on PC?

It is important to state that, there is no downloadable version of NCAA Football 14 on PC; however, you will need to use an emulator. Also, keep in mind that Xbox’s emulator system leaves a lot to be desired, which means you should use a PS3 emulator so that you are getting the best possible experience.

A PS3 emulator that has not only received praise for its NCAA Football 14 playability but is also the most popular option for an emulator on PC.

As nice as it would be to play a college football game in just a few simple clicks, it is unfortunately not the case. Below, you will find everything you will need on your PC to play NCAA Football 14.

The best PS3 emulator to use to play NCAA Football 14 is the RPCS3. So that you may play NCAA 14 on your PC by running the RPCS3 emulator, your computer be it desktop or laptop must meet these standards.

So long as your PC meets these specs, you should have no issue downloading the RPCS3 emulator. Follow along below and we will get you playing NCAA Football 14 on your PC in no time.

How To Play NCAA Football on PC

How to Download RPCS3 and Play NCAA on PC:

Step 1. The first thing you will want to do is hop onto your internet browser and go to the official RPCS3 website so that you can download the RPCS3 installation zip file and then simply unzip it.

Once you have unzipped the folder, then you can double-click the rpcs3.exe file, after you have done so the RPCS3 will launch directly. Once the RPCS3 has launched, you will also need to grant access to RPCS3 so that it will be allowed to accept other settings or update its data.

Step 2. Next, you will need to go to www.playstation.com and locate and download the PS3 Update so that you have the latest PS3 Firmware. After that, go ahead and return to the RPCS3 and click on “File,” then from there click on “Install” and finally, “Firmware.”

From here, you can locate the PlayStation 3 firmware file you downloaded just a second ago. Once the firmware installation is completed, you can go ahead and click on “OK.” Now, the RPCS3 should start pre-compiling modules.

Step 3. For this next part, you will need to retrieve the game ROM. The game file is typically in ISO or PKG format. You may be inclined to download the NCAA 14 ISO or PKG online. Typically in this scenario, you will get a zip file, and you will want to unzip that file.

Step 4. Next, you can click “File,” then click on “Add Games” and go to the unzipped folder, this is where you should see the game has been added to RPCS3.

Step 6. Next, you will want to right-click on NCAA 14 and then choose the “Boot” option. At this point, RPCS3 will compile multiple files and now, you can have a blast playing NCAA Football 14 on your PC. Keep in mind, that the file compilation is only necessary for the first time that the game boots.

All that is left to do at this point is to enjoy playing NCAA Football 14 on your PC and most importantly, scratch that nostalgic itch.

What Consoles Can You Play NCAA On?

Unfortunately, the only consoles that you can play NCAA Football 14 on are the PlayStation 3 and the Xbox 360. This unfortunate fact is due to lawsuits over the game using the likenesses of college football players and licensing issues. However, fortunately, with this guide we have provided you can indeed play NCAA Football 14 on your PC and get back to smashing epic plays with your favorite and even new players.

As previously mentioned, EA Sports is developing a new NCAA college football game, that is reportedly coming out within the next year, which is exciting but does not get too hyped though since it is more likely to be released in the following year of 2024.

With the new NCAA college, a football game is being developed by EA Sports, who partnered with CLC in order to secure the rights to FBS schools, stadiums, and uniforms amongst other college football traditions.

It is rumored that the new game will have at least 120 different schools in the game. With the new college football game just barely peaking over the horizon, it only makes sense that has been somewhat of a resurgence with the NCAA Football 14 game.

Lucky for you, with this guide, you will not have to pay for an arm and a leg to play NCAA Football 14 once again.

Provided that you have the proper equipment, you will be making plays with your favorite players, witnessing insane tackles, and even crushing your friends in an exciting football game. We hope you found this feature helpful and that you can now play NCAA Football 14 on your PC.