Home Do More Gaming How To Play Guitar Hero On PS4 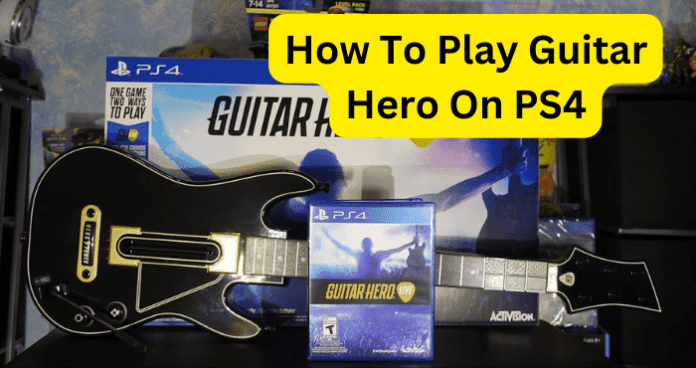 If you are a gamer, you will likely have many nostalgic memories of playing one of the Guitar Hero games when it redefined what it meant to play a video game with music from throughout time.

Some may remember trying to get through the whole song of “Through the fire and flames” on the expert difficulty setting, which almost guaranteed a hand cramp. However, gamers/music lovers have been wondering if you can play Guitar Hero on the PS4 console.

If you are one that has been curious, you have come to the right place, as we will be answering whether or not you can play Guitar Hero on PS4 and much more.

Can You Play Guitar Hero On PS4?

Now, it should be stated that you can play Guitar Hero Live 2-Pack Bundle on any PlayStation console.

You can purchase a hard copy of the Guitar Hero Live 2-Pack Bundle for the PlayStation 4.

However, you can still find a used hard copy of Guitar Hero Live on eBay.

It is interesting to know it all started back in the 2000s when the hardware developer RedOctane came across a rhythm-based game, which was created by the well-known Konami, and this particular game was called “Guitar Freaks.”

This enlightening new take on a video game was only released in Japan at the time, and this unique game featured a guitar-shaped controller, which you could use to play a rock and roll playlist.

RedOctane saw this and noticed how well it was doing over there and they knew that it could be introduced to the west, with a very similar guitar controller and a partnership with game developer Harmonix, the first Guitar Hero was gifted to unsuspecting gaming/music lovers and it took off.

It is important to note that both the first Guitar Hero and the following Guitar Hero 2 were extremely well received, which also brought the spin-off game Guitar Hero Encore: Rocks the 80s.

The Guitar Hero game Guitar Hero 3: Legends of Rock, which was developed by Neversoft is likely the most commonly and fondly remembered game in the series.

Now that we are familiar with how Guitar Hero got to be where it is today, let’s get to how to play Guitar Hero on the PS4 console. Read along to find out.

How To Play Guitar Hero On PS4

Important Note: Before we begin, as previously stated, you will need a hard copy of Guitar Hero Live and if you want a bundle pack with the guitar controller, you will have to act very quickly and get Guitar Hero Live bundle (view on Amazon).

Step 1. The first thing you will want to do is acquire a physical copy of Guitar Hero Live for the PlayStation 4.

Once you have done that, you will need to insert the disc into the disc receiver on your PS4. After you have inserted the disc the game and any updates needed should download automatically.

Step 3. Now that you have moved to the Guitar Hero Live title box via the controller’s power stick, you will want to tap the one button at the very top of the neck of the guitar controller, which if you are familiar with the layout of a guitar, it will be the button right below the tuning board.

Step 4. When you tap this one button, it will select the Guitar Hero Live game and it will subsequently launch the game.

Step 5. If this is your very first time booting up the Guitar Hero Live game, you will be taken through a tutorial.

Now that you have reached the Guitar Hero Live main menu screen, you can now calibrate your guitar controller and also choose your game mode.

Assuming that you have purchased a hard copy of Guitar Hero Live and have also inserted the disc into your PlayStation 4, by following the previously provided steps you will be able to play Guitar Hero Live on your PS4.

What Consoles Can You Play Guitar Hero On?

With Guitar Hero and all of its older and more recent installments into the game series being beloved by many gamers/music lovers, it is quite likely that you will want to know which consoles you can play the Guitar Hero Live or otherwise on.

Keep in mind, that the original Guitar Hero games are available to play on Xbox 360, Xbox One, PlayStation 2, and PlayStation 3.

The newer version of Guitar Hero Live also offers more customizable options than the games that came before Guitar Hero Live, options such as the ability to create custom charts and songs.

Another new addition to the features is the full band capability, which means that you can essentially play it as you would with the Rock Band game series with not just guitar but also drums and vocals.

You can also download new songs to play from the PlayStation Play Store, there are currently only four songs available for download, which may also decrease due to rights issues.

This means that is possible that you could purchase a hard copy of Guitar Hero Live and go to the PlayStation Play Store and find absolutely no songs available for download, which as previously mentioned, is due to problems with the copyrights for the songs.

This is also one of the reasons you cannot purchase a digital copy of Guitar Hero Live on the PlayStation Play Store.

You can play the most recent Guitar Hero Live (2015) on the following consoles:

It can be genuinely frustrating when you cannot play a certain video game on a particular console; however, there is almost always a way.

With that said, we have no control over any copyright issues that those games may face, be it now or in the future.

Guitar Hero holds many fond memories for many gamers, especially for those who were in the target audience of 2005 when the most well-known addition to the game series was released to eager gamers/music lovers.

Not only that but they also brought a whole new spin on what it meant to play a video game with accompanying music.

Since not only were you listening to great hits from the past and present but you were also getting the opportunity to play the songs and feel like a rock star if but for a couple of minutes.

It should be said that Guitar Hero was the OGs of playable music video games, which means that they were a household name well before Rock Band got started with implementing other parts of the band such as drums and vocals.

There have also been rumors swirling that there may be a new addition to the Guitar Hero game series, while this has not yet been confirmed, it is very likely that we could hear of a new Guitar Hero game in development in the coming year of 2023.

There are also lawsuit issues that Activision has faced that must be considered, which means that if we do see a new game, it very well could be from a different video game publisher.