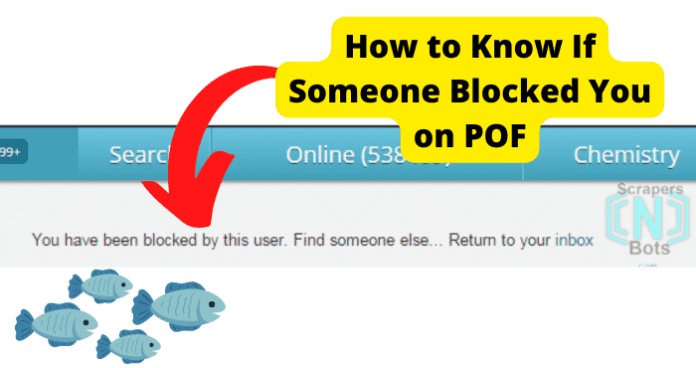 It can be quite disappointing when you realize that you can no longer have conversations with a particular user, and you wonder whether you have been blocked by them.

So, how do you find out if someone blocked you on POF? Read on and have all your questions answered.

How to Know If Someone Blocked You On POF

The quickest and easiest way to find out if you have been blocked by a user on POF is by trying to send them a message on the platform.

On some occasions, the error message will read that you have been blocked by this user and that you should find someone else.

However, even though you would not be able to send a message to the user, you may still be able to find them on POF using the username search.

You would simply not be able to contact them when you do find them. This has caused some confusion among users because on most dating platforms, when someone blocks you. Their profile is no longer visible to you in any way.

Normally, when you send a message to the person, you get the Message Sent notification…and then you may be asked to upgrade to find out if they have read your message.

But when they block you, you will get a message saying outright that you have been blocked by the user.

Why Would Someone Block You POF?

Unfortunately, there is simply no way to know the particular reason why someone has blocked you on POF.

Different users have different reasons for blocking people on the platform and sometimes, it really isn’t personal. Below is a list of some of the main reasons why someone may block you on POF.

Plenty of Fish has more than 2.5 million conversations every day. This means that one user can have several conversations with different people in a day. As a result of this, people prefer to keep conversations going only with people that they are genuinely interested in.

We have found that this is actually the most common reason why a user on may block you on POF.

Plenty of Fish itself states that being successful on the POF platform means that your behaviors are aligned with the four pillars of standard conduct, which include:

POF states that any form of harassment, rudeness, bullying, intimidation, defamation or stalking of other members is very likely to get you blocked by the users.

And not only are you blocked, but POF could also take action against you if your actions are reported to them.

In essence, if you engage in any behavior that is unkind, threatening, disrespectful, unsafe, or found to be dishonest, you are likely to get blocked by users. And if found by POF, you may even get banned from the platform.

Many POF members report that they are spooked or turned off by users who are obsessive in their messaging.

This means that when you send a message to a user, you should be patient and wait for their reply before sending them another message.

If you send messages that are insistent, obsessive, or impatient, you can scare the user away, and they will block you to prevent you from being a bother to them.

Plenty of Fish prides itself in being one of the cleanest dating platforms for singles in the world. And people on the platform find it to be the best way to look for genuine connections.

Therefore if you have the wrong intentions, such as sending messages containing unwelcome sexual propositions or sexually explicit content, you may get blocked by the user.

Also, things like prostitution, extortion, solicitation, promoting or advocating for commercial sexual services, human trafficking, or nonconsensual sexual acts on POF could also get you blocked.

Many users are already aware that POF moderates such content; therefore, they are unlikely to tolerate it from you, so they block you when you engage in such.

If Someone Blocked Me on POF, Does the Conversation Disappear?

Yes, if someone blocked you on POF, the conversation would disappear. Regarding the question of being blocked on POF, here is what POF has to say:

You can only block someone with whom you have exchanged messages.

When someone blocks you or you block someone with whom you’ve exchanged messages, getting blocked or blocking them will permanently delete records of your conversations

A user can unblock you, or you can unblock a user at any point in time, but you may not be able to restore the previous conversations before.

Therefore, one of the sure ways to know that you have been blocked by someone is if you try to open your conversation with them and you find that all the conversations are gone.

However, this may not always be the case. If the conversation remains on your end and you try to text them, you will get a message saying that you have been blocked if they have indeed blocked you.

What Happens When Someone Blocks You on POF?

Find below all the visible things that happen when someone blocks you on plenty of Fish:

1. You can no longer message them

As we explained earlier, when someone blocks you on POF, you will no longer be able to send them messages.

When you get this message, there is nothing you can do to message them again unless you create a new POF profile. However, POF frowns on doing that and may ban you if they find out what you have done.

When someone blocks you on POF, and you are no longer able to message them, we recommend that you just move on. It is usually nothing personal and may just be because they are receiving too many messages and are not able to keep up with all of them.

You should note that blocking someone on POF is a very deliberate process and is hardly ever done by mistake.

So when someone blocks you, it means that they really do not want to keep in touch with you. To block you on POF, they must have gone through the process below:

They opened their conversation with you.

They clicked on the three vertical dots on the top right-hand side of the screen.

From the menu, they tapped on the block of this person and then confirmed the action to block you.

They opened their conversation with you.

They clicked on the three horizontal dots on the right-hand side of the page just above your profile image and clicked on block member.

You can see that this is a deliberate process and so you should not dwell on it or look for ways to circumvent the block. There are many profiles and people using plenty of Fish and it’s only a matter of time before you connect with another user.

Another thing that happens when you get blocked on POF is that your conversations with the person are likely to disappear. When this happens, it means that they have blocked you.

Does POF Tell You If Someone Blocked You?

When Someone Blocks You on POF Can You See Their Profile?

Yes, when someone blocks you on POF, you can still see their profile. They may appear to you in people nearby.

But you can also search for the person using their POF username, even though this is only possible if you are an upgraded member and have access to username search.

If you have this access, you will be able to see the person’s profile and profile information, but you will not be able to contact them in any way using the same profile that they have blocked.

Although there are two paid versions of POF, which include POF Plus and POF Premium, you can only search by username if you have a POF premium subscription.

However, you should note that even if you have POF premium and can search for the user who blocked you by their username, you will not be able to send them a message.

How Do You Check If Someone Has Blocked You?

When someone blocks you on POF, POF does not send you a notification. Because of this, you may not know that you have been blocked until you try to send the person a message.

Trying to send a message is the quickest and most reliable way to find out if the person has blocked you on the platform. When you try to send the person a message, you will receive a notification saying that you have been blocked by the person.

2. Check if your conversations with the person are still there

There is really no other way to know if someone has blocked you on POF. You are still able to see the person’s profile and their profile details. You are only unable to send them a message when you click on the option to send a message.

What Does It Mean When a Profile is No Longer Available on POF?

When you see that a profile is no longer available, it means that the profile has been deleted. It could either mean that the user deleted their POF account or that POF has deleted the user’s account for one violation or the other.

Users may decide to delete their POF account if they have found what they were looking for or they are simply no longer interested in using the application.

When this happens, unlike on other dating sites where you may see Profile Deleted, what you will see on POF is Profile Is No Longer Available.

You are only able to see this message if the profile has had some kind of interaction with you, such as having conversations or liking your own profile. When you see this message, it means that the user has likely deleted their profile by themselves.

The other possibility is that POF may have deleted the user’s profile. There are several possible reasons why Plenty of Fish may delete a user’s profile. When you refer to their terms of use and community guidelines, you will find the following:

If you are married or part of a couple looking for someone to join you, then POF is not the place for you. If discovered, the account will be banned.

Any form of commercial sexual services is prohibited on POF and will result in the account being permanently banned.

Using plenty of Fish to carry out illegal activities will result in the account being banned.

If you get blocked by users too often, POF will moderate your account and may ban it, especially if you have been found to be disrespectful to users

POF is constantly checking for bots or fake accounts. When such accounts are discovered, they are banned or deleted permanently from the POF platform.

Which explains why you may receive a notification that a profile liked you, only for you to go to check out the profile and see that it is no longer available. When this happens, it is very likely that the profile was a bot and has been banned by POF.

Furthermore, sending spam messages, engaging in a scam, or using POF to solicit for business will result in the account getting deleted.

When any of these happens, you will see a message stating that the profile is no longer available.