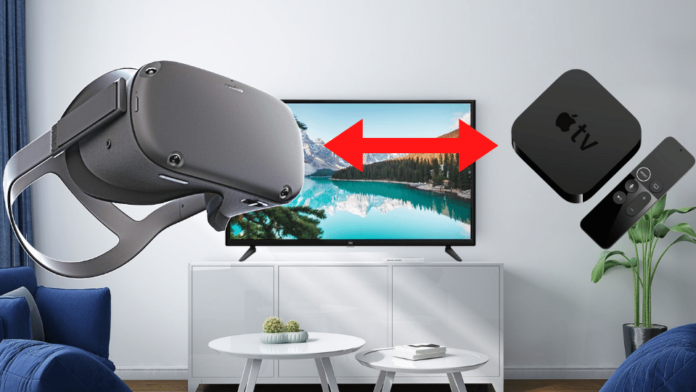 Apple users want to know if Quest 2 can be cast to their favoured Apple TV. Apple is very niche and proprietary, and they support minimal integration with other products.

Whether this is a security exercise or a move to force users to use Apple products across devices is unknown, but the fact remains that with an Apple product like an Apple TV, there is very little you can do when it comes to cross-product integration.

Read on to find out the best ways to cast your Quest 2 to Apple TV, the challenges you may face, and how to resolve them.

Can You Cast Oculus to Apple TV

To connect your Quest 2 to Apple TV, you would have to cast to your iPhone or Mac and then mirror the screen to your Apple TV.

Before we proceed, here are comprehensive lists of devices that support inbuilt Chromecast, attached Chromecast, and inbuilt Airplay

All the brands above support Chromecast device

As you can see from the above lists, your Apple TV only supports AirPlay to your phone or Mac. If you need to be able to cast directly to your TV, you would need to go with the devices that support Chromecast.

However, this does not mean that you cannot view your Quest 2 on your Apple TV. You would need to use your iPhone or Mac as a bridge between your Quest 2 and Apple TV. Find out how below.

How to Cast Oculus Quest 2 to Apple TV

To begin, you need to first enable AirPlay on your Apple TV using the steps below:

1. Open Settings on your Apple TV

1. Open the Oculus app on your phone

3. Under Cast From, select your Quest 2 headset

4. Under Cast To, select This Phone

5. Strap on your headset and accept the casting permission request

1. Turn on your Oculus Quest 2

2. Strap on your headset and press the Oculus button to open the universal menu

Then mirror your iPhone screen to Apple TV:

Since you have already enabled AirPlay on Apple TV, you can instantly mirror your phone to the TV using the Screen Mirroring feature on your iPhone. To do this:

1. Slide down from the top of your screen (or up from the bottom) to open Control Center

4. If there is a code displayed on your TV, enter it into the phone to start mirroring.

1. Turn on your Oculus Quest 2

2. On your Mac, open a Chrome or Edge browser and go to oculus.com/casting

4. Strap on your headset and press the Oculus button to open the universal menu

9. Then select your Mac PC and select Done

To mirror Mac to Apple TV

1. Open the Control Center on your Mac and select Screen Mirroring (overlapping rectangles)

Challenges You May Face

Unfortunately, not all games and applications on Oculus Quest 2 support casting. But this changes all the time. Beat Saber, for example, did not support casting for a long time until the game developers finally responded to user requests.

Because of the number of connections and level of integration needed to make this setup work, there may be audio issues on the Apple TV. Viewers sometimes hear sounds after the frame has played. To minimize such issues, make sure that your Quest 2 and the Apple TV are within 30ft of the router.

The setup to render your Oculus Quest 2 requires two connections:

1. Casting from your headset to your iPhone or Mac, which ideally requires internet speeds in hundreds of Mbps.

2. Mirroring your iPhone to your Apple TV which also requires similar internet speeds, and strong WIFI signals in all devices.

Quest 2, as at the time of writing this article, does not support direct casting to Apple TV. You would need to first cast to your iPhone or Mac, then use a different technology called screen mirroring to render Quest 2 to your Apple TV.

Can You Airplay Oculus to Apple TV?

Apart from Apple devices, many smart TVs and streaming devices now support AirPlay as manufactures look to have better integration with Apple products. However, as at the time of writing this article, Oculus Quest 2 does not have the AirPlay feature on it.

The only way you can AirPlay Oculus to Apple TV is to cast Oculus to your iPhone, iPad, or Mac, and then AirPlay to your Apple TV.

For you to successfully cast Oculus to Apple TV through your iPhone, iPad, or Mac, you need to ensure that all the requirements listed at the start of this article are met. Apart from that, there are other technical issues that may be preventing your casting setup from working, such as:

When casting from the Oculus app, some users tend to think that the Quest 2 headset does not need to be on. Others simply forget that it isn’t turned on.

Even though you are transferring control of Oculus from your headset to your phone or Mac, the Oculus headset must be on because it is the source of the casting, and the engine of the virtual reality experience.

Before you perform any other action in the casting setup, make sure that your Quest 2 headset is turned on, and has fully booted to the home screen. Also, confirm that you are signed into your Oculus account. If your headset is unable to turn on, there are a few things you can do.

We have observed that trying to cast Quest 2 to iPhone or Mac and then mirroring to Apple TV when the headset battery is low, causes more glitching.

This is because your Quest 2 uses more power than usual to support the bridging setup needed to make casting to Apple TV work. The most common glitch from this is the audio mismatch.

Before turning on your headset and setting up this connection, make sure that your Quest 2 headset is fully charged. However, do not plug the headset in to charge while playing. This will cause damage to the battery, and to your headset in the long run.

3. Using Device That Does Not Support AirPlay 2

For Quest 2 to be mirrored on Apple TV, the mirroring device and the Apple TV must support AirPlay 2. AirPlay 2 is an advancement on the old AirPlay: it has support for virtual reality, third-party devices, and audio syncing. To mirror content that is coming from a non-apple system, AirPlay 2 is needed.

Fix – Confirm that your iPhone or Mac supports AirPlay 2

3. If the icon shows as a triangle with radiating circles on it, your device supports AirPlay 2

We stated earlier that you need excellent WIFI signal strength on your devices, and high internet speeds on your router in order to enjoy seamless casting of Quest 2 to Apple TV through your phone.

If any of WIFI signal strength or internet speed is compromised, the connection will not be successful

First thing to do is ensure that the Quest 2 headset, the Apple TV, and the iOS or Mac device are all within good distance of each other. Oculus recommends 30 ft from the router.

If, for some reason, you are unable to have all your devices within this range, then you should consider getting a WIFI extender. We recommend the wired WIFI Network Extender to ensure that you have excellent WIFI signals all over your location.

Having too many active connections on your standard router will negatively impact signal strength reaching each connected device.

Your router can only give off a limited amount of signals at a time. So, having too many devices connected will cause high latency on your network because the connected devices would have to share the limited signals from your router.

Even though some routers support connecting more than 20 devices at a time, you should disconnect the devices that do not require WIFI connection at the time of casting. Smartphones and tablets have minimal impact on WIFI signals, but larger devices need to be disconnected for a seamless casting experience on Apple TV.

Fix 3 – Use the Right Frequency

If you have always only played quest 2 on your headset or cast to your iPhone, you may not have heard about the importance of WIFI frequency in casting Quest 2. WIFI routers usually have a dual band frequency consisting of 2.4Ghz and 5Ghz.

Now, to cast Quest 2 to your Apple TV using iOS or Mac, you need speeds in hundreds of Mbps, therefore, 5Ghz is the recommended frequency for the setup. As long as you have your devices within 30ft of the router, casting with 5Ghz should work fine.

To use 5Ghz, you need to disable 2.4Ghz using the steps below:

1. Connect your PC to the WIFI router

2. Enter your router IP address into a web browser and Go

3. Press Option and click the Wi-Fi icon in the Menu Bar together.

4. In the menu, your Wi-Fi router IP address will be listed under the Router.

4. Select Advanced at the bottom right of the screen

6. At Router, you will see the router IP address

After opening the IP address on your router, log in with the admin username and password. Again, this detail is on the manual, but if you do not have the manual, please go to Router Passwords and search for the default admin credentials for your router brand.

After logging in, go to the Wireless or WIFI section of the configuration page and select 2.4Ghz, then toggle to turn it off

If you make all of these adjustments and you are still having issues with your connection, it is possible that your internet speed is poor, or you have no internet access in the first place. The first thing to do in this case is to power cycle the router. To do this:

1. Unplug it from power supply

3. Plug it back in and wait for it to show the internet connectivity indicator

4. Check that your Quest 2, your iOS or Mac, and your Apple TV are all connected to the WIFI, then retry the casting

If the issue persists, go to www.speedtest.net to check your internet speed. If you are having less speed than you should, please contact your ISP.

5. Devices Out of Date

Another possible reason why casting Quest 2 to your iOS or Mac, and then mirroring to Apple TV is not working, is that one or more of the devices may be out of date.

To support an integration of this kind, all the connected devices need to be running the latest firmware. This will provide the capabilities to integrate with third-party devices. It will also clear any bugs that may be preventing the casting from working.

1. Make sure your headset is fully charged

2. Press the Oculus button on your right controller

7. Then confirm to Install Update

5. If you see an update and an upgrade, select the Upgrade instead. It will contain the latest updates

6. App Does Not Support Casting

Like we stated earlier, some apps on Oculus Quest 2 do not support casting from the headset to another device. This feature is not controlled by Oculus, but by the developers of the app or game. If your setup is right and you are unable to cast a game to your iPhone, it is likely that the game does not support casting.