Home How To Software & Apps How Long Will ChatGPT Be Free? 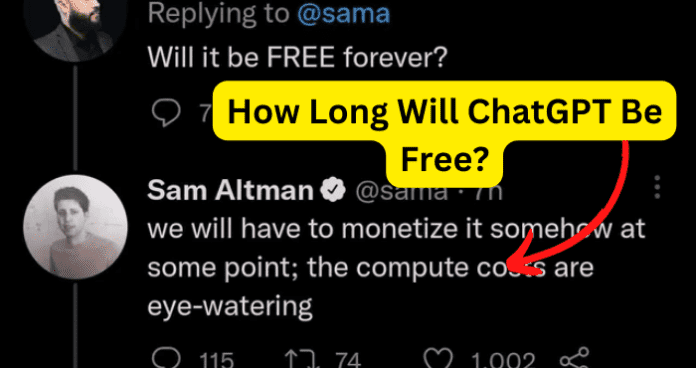 As of now, ChatGPT is free-to-use. However, it is not unlikely that sometime in the future it will become monetized and start to cost some yet-to-be-determined amount of money. This is common with all new technologies that have become popular across multiple industries.

How Long Will ChatGPT Be Free?

It is hard to answer this question as there has not yet been any confirmed information on when ChatGPT will begin to be monetized by the developers. It is thought that sometime in the year 2023 that more information will become available regarding an exact timeframe for when you can expect to have to pay to use ChatGPT.

By 2024, it is extremely likely that a monetization plan will be in place and users of ChatGPT will begin to have to start paying to use the service. That being said, no information regarding a timeframe for monetization is currently confirmed.

You can expect to have more information available regarding this timeframe sometime in the year 2023. Until then, you can enjoy ChatGPT and its features for free. It is highly advised that you do so now so you can determine whether the service is worth paying for once it finally becomes monetized.

How Much Does It Charge To Run ChatGPT?

While there is no exact number made public regarding how much it costs to run ChatGPT, it is thought that it costs an average of around 0.5 cents per chat. With that average estimated cost in mind, we must take into account the number of users of ChatGPT.

There are several million monthly users of ChatGPT. Since the amount of chats that users can initiate using ChatGPT is currently unlimited, the total number of chats could reach several hundred thousand daily. This makes it completely feasible that the monthly cost to maintain the ChatGPT servers on the developer’s end could reach upwards of three to five million dollars.

This would bring the average yearly estimated cost somewhere between 36 to 60 million dollars a year. In actuality, the yearly cost of running ChatGPT could exceed this cost by several million. These steep costs are the main driving reason behind monetizing ChatGPT, as it is simply unsustainable to run a service that costs that much for free.

Until a service model is revealed, we only have rough estimates to base this information on. What we do know is that ChatGPT is being utilized by more people across more industries every day. This means that the costs to run ChatGPT will only increase as time goes on and more people start using the service.

When a more concrete monetization plan is revealed, ChatGPT will likely make public the exact costs per chat to justify the transition from free to paid service. Once again, you should make use of ChatGPT now while it is free so that you can determine whether you utilize it enough to be worth paying for.

How Much Will ChatGPT Cost?

While there is no concrete information available yet regarding the potential costs of ChatGPT, it will likely resemble some sort of monthly subscription model.

This is the most likely scenario, as it would streamline the monetization process and allow users to use ChatGPT as much as they like within their monthly subscription period.

It is also extremely likely that users will have the option to pay for an annual plan that renews yearly for a discounted price per month. This plan will likely incur higher upfront costs but will be cheaper than paying month by month.

Until more information is known, there is simply no way to tell for sure how much ChatGPT will cost. It is likely that it will be affordable but still in line with the overall costs of maintaining the service. Since as stated above, the costs associated with running ChatGPT could possibly exceed 60 million dollars a year, you should expect a price range that reflects that.

There is no real need to worry as the service is bound to stay affordable enough for it to be accessible to the average user. There may also be the possibility of a payment plan that is on a by-chat basis, meaning you are charged for each chat that you initiate and nothing more.

This type of payment plan would likely be more appropriate for a business or industry that does not use ChatGPT that much. People who utilize ChatGPT frequently and on a daily basis will likely be better off if there is a monthly or annual subscription plan put into place.

No matter what type of monetization system they put into place, you will need to keep an eye out for any new information that will likely be revealed in the next year or so. 2023 will likely see more information roll out regarding their plans for monetization in the future. By 2024, you should expect to be paying for ChatGPT using whichever service model they decide on.