Home Do More Social Media How Long Do Likes Last on Tinder? 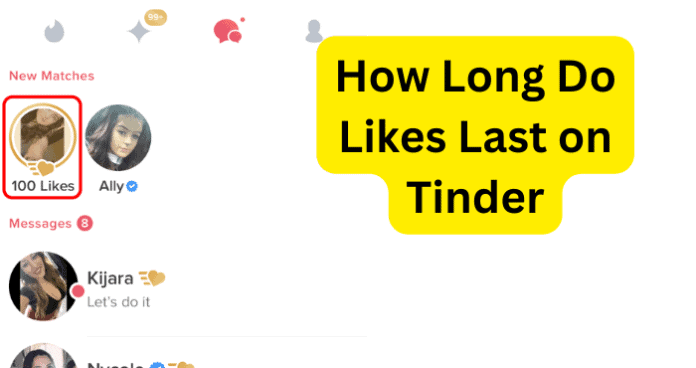 How Long Do Likes Last on Tinder?

Tinder likes last forever. They never expire. The only way a Like will disappear is when they delete their account. Apart from that, the like you received will never expire nor will the like you send.

Do Likes Expire on Tinder?

The easy answer is no. Your Tinder likes will never expire, no matter how long ago you swiped right on them. Further down the line, you are able to unmatch people, which will allow you to indirectly block them.

Unless, of course, you added them on another social media platform or use their actual number.

If you are an active Tinder user, then you’ve probably noticed that your likes might have disappeared. And yes, they do last forever, but that doesn’t mean there is no way to get rid of them.

However, while Tinder does make money off of ads, just as many other free apps do, Tinder also makes money off of its subscription service.

This is also common in many free apps. While the initial download is free, many of the app’s key, and let’s face it, desired features are blocked behind a paywall.

Luckily, Tinder offers a fifty percent off deal whenever buying your first official month of Tinder gold, which is the app’s subscription policy.

Probably the most widely used feature of Tinder gold is the ability to see who has liked you! While you’ve probably noticed as an active Tinder user that you cannot see the people you’ve liked, you also have no way of seeing your past likes.

That means that you have no way of seeing a profile that you liked again unless that person also likes you and you two become a match.

However, with Tinder gold, you are able to see all of the people that like you, and you can then decide if you want to match with them or not.

One of the less used features of Tinder gold is the ability to reverse alike, which is what this step is discussing.

Let’s face it, we’ve all been confused at times about which way to swipe, or maybe you accidentally swiped on someone that you did not want to like. Well, this is how the reverse-like feature from tinder gold can come in handy.

This feature allows you to go back to your most recent like, and unlike the person that you initially liked.

This feature is how one of your likes can be removed from Tinder even if you initially swiped on them. But keep in mind, your like still lasts forever, and it will not ever expire.

There is, instead, simply a feature through the paid subscription called Tinder gold that allows you to remove, or delete, your like completely.

Another way your like can have been removed from Tinder is if the person you initially liked has deleted their account. Unlike step one, this step can happen without the purchase of Tinder gold, the subscription service Tinder offers.

While you won’t be able to see who you liked in the past, your likes will never expire, which means you always have the opportunity to match with this person in the future.

However, if someone deletes their account, then their entire profile is removed from the Tinder app. This means all of their conversations are deleted, as well as all of their likes. The likes that people have sent them are deleted too!

This is why, while your likes will never expire, you might have noticed that many of them are disappearing. This is due to an event like that account being deleted.

It’s important to note as well that if you have matched with a person who deletes their account, something unique happens. Once you’ve matched with someone, you are able to head over to your direct messages and communicate, or text, with your match.

How else would you plan out where and when to meet? But this is where the unique thing happens. If someone deletes their account, you will then see their profile picture as the blank inside of your direct messages.

If you ever see a blank profile picture, just know this means that your liking on that person’s profile has also been deleted. So even if they eventually come back to Tinder, you will not have a like on them.

3. Disappeared Due to a Glitch

One way your like could have been deleted is due to nothing either of the users had anything to do with.

Unlike steps one and two, where the user would have to have purchased Tinder gold or deleted their account, this step is complete the app’s fault. The problem was a bug!

You might have noticed during your time on the app that some of your likes are disappearing, and it is definitely a smart thing to consider that it might just be a bug in the app.

There could very well be a data storing issue where the app’s library of information got mixed up and wound up removing your like.

Don’t worry, however. Just because a bug removed your like doesn’t mean that you will never be able to match with this person again. It is likely, that since you no longer have a like on that profile, Tinder will show you that profile again while you are on the app.

So when you see that person pop up again, you can swipe right, just like before. And who knows, you might even become a match later on!

Another way your Tinder like can be deleted is if the person you liked has their account suspended or banned.

Do Tinder Likes Expire If You Don’t Like Back?

No, Tinder likes do not expire even if you don’t like them back. Don’t worry. You can still decline someone’s like and refuse to match with them. But their likes on your profile will never expire. That way, if you ever do decide to match with them, you still can!