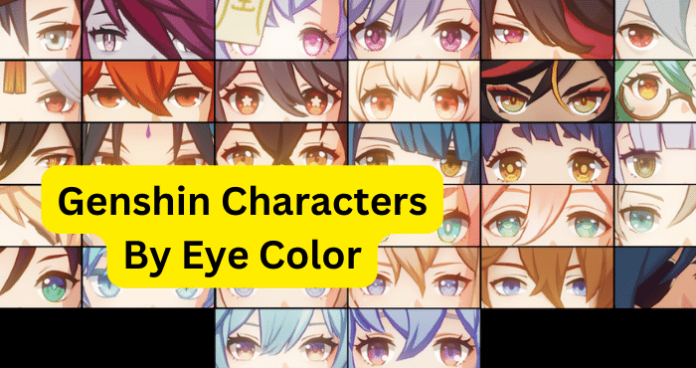 There is a surprisingly large amount of playable characters in Genshin Impact with blue eyes, in fact, the only other eye color that comes close to the same amount is yellow eyes.

Now, we could go into the science of blue eyes such as the fact that if someone has blue eyes, it means that the iris part of their eye lacks melanin, but who wants to know about that?

As previously mentioned, the only eye color that occurs as often as blue eyes in Genshin Impact is yellow eyes. There are many things in Genshin that are works of fiction this includes yellow eyes, as they are not common at all with humans in reality.

However, yellow eyes usually stand for sneaking abilities since they are usually observed on reptiles, cats, and birds of prey. This seems to fit for the characters that have yellow eyes in Genshin Impact.

Those with red eyes can be considered by some to be evil or demonic; however, considering how lighthearted Genshin Impact is this usually does not apply to characters with red eyes.

On the other side, red eyes can mean that the person is courageous and brave. What’s more, is that most see red eyes as symbolizing strength, and protection, and some even consider it to ward off evil.

Green is quite the fitting eye color for the five characters that have them in Genshin Impact. Green typically reminds people of nature since it shares this color in many forms such as grass, leaves, and plants.

People that have green eyes are said to be very passionate in their relationships and are also very creative spirits.

However, those with green eyes are also susceptible to becoming jealous quite easily. These vibrant beings are also known to bring compassion wherever they may go.

Honestly, who does not want purple eyes? They are a breathtaking color to have for someone’s eyes, which is also quite fitting for the three playable characters that have purple eyes in Genshin Impact.

Now, brown eyes may be one of the most common eye colors to appear in Genshin Impact but this does not take anything away from the characters who have them.

People with brown eyes are considered to be determined, independent, and have an abundance of self-confidence. Now, it can be difficult to distinguish characters with brown from those who have yellow/hazel eyes; however, there are a few.

Genshin Impact is a fantastic game that is making waves in a good way. There are so many diverse and fun characters but what might be even more colorful is their eye color, as was shown in this list.

A lot of fans of Genshin Impact have been receiving backlash for even enjoying the game. Sure, Genshin Impact might be a gacha game but it is only making players happy. With this in mind, pay no mind to anyone who wants to bother you for liking a video game.

It has been said that the eyes are the windows to the soul and it is almost as true as cliche it is to say. The developers and character creators of Genshin Impact have done a good job of matching the element of the character to their eye color.

For example, cryo characters will typically have blue eyes, which is very fitting.