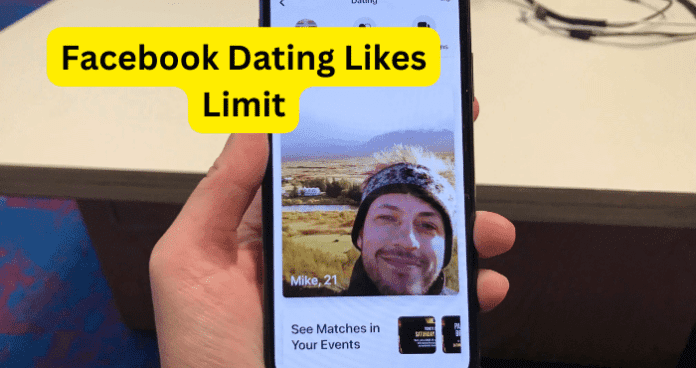 How Many Likes Do You Get on Facebook Dating?

Facebook Dating will allow its users to “like” up to 100 profiles daily, which means that you can reach up to 100 likes each day on the dating service app. Once you have been using Facebook Dating for a longer period, your “likes” are likely to go up, in contrast to where you started.

It is difficult to pinpoint an average for likes on Facebook Dating; however, the longer you are using the service, the better your chances will be of receiving likes.

How Many Likes Per Day is Normal (to Receive From Other Users)?

There is no legit way to account for an overall average “like” per day estimate; however, if you are up to it, you could calculate your typical amount of likes per day to figure out what is normal for your personal Facebook Dating profile.

Ideally, you will want to have some time on the service to make an accurate estimate, this way you can have a more accurate estimation of how many likes you should expect on each consecutive day.

Your outcome number will likely vary, which is because of multiple differing factors, such as how you present yourself (your profile) and general attraction.

Unfortunately, only you can come to a conclusion as to what is normal for your Facebook Dating profile. What you could do is keep a tally of how many likes you get each day for a couple of weeks or even a month.

Once you have a decent amount of data on your daily likes count, then you can use that information to make an educated guess as to how many likes you should expect each day.

If you notice that your “likes” numbers are going down, up, or even varying wildly, you should inspect what you changed on your profile at the times of those increases or decreases.

It could be a new profile picture or perhaps you offered more information on yourself in your Facebook Dating profile bio, these may seem like small changes but they can also have an impact on how your dating profile performs.

Generally speaking, yes, having a Facebook Dating profile that surpasses 99+ “likes” can be considered very popular with other users on the dating service app.

Now, the “likes” limit set on Facebook Dating is 100 “likes” each day, so seeing this number means that you have certainly met or have somehow blown past the maximum amount of likes for your profile.

This number is not one that you should assume that you will gather for your profile; however, with a good enough profile, you very well may be able to reach such a “like” count.

It should be noted, that having 99+ “likes” does not mean that the user is successful in every relationship, this number can be seen as more of a sex appeal flex or simply bragging rights.

You should not compare yourself to a profile with this many “likes” or assume that you will reach this amount, as this amount of likes is not considered “normal.” It is possible that the profile is either fake or has been curated to prove a point.

While it is easy to fall into the irrational thought of, “Facebook Dating must have a like limit so that all of the beautiful people don’t break the internet.”

However, this is simply not true at all. The more likely reason for Facebook Dating setting a “likes” limit is to reduce the number of bots and spam on the app from accessing such features.

As we mentioned in the last segment, there are fake profiles that are commonly known as “bots,” and these profiles are created to generate high “like” counts, typically these accounts have not honestly earned their likes.

Usually, with dating apps, you could also blame this limit on a premium account hold-back; however, Facebook Dating is one of the completely free dating apps that does not have any paid features or premium upgrades.

In a technical world full of premium offers, this may seem unimaginable but it is true, there is no catch to it, users will not have to pay a single cent to receive “likes,” match with someone, or send messages. So, if you are hoping that you can raise the “like” bar by paying for a premium membership, you are out of luck since there simply is not one.

Unfortunately, no, there currently is no way to bypass the “likes” limit on Facebook Dating. Similarly, there is also a swipe limit on the Facebook Dating app, which allows its users to only swipe right a max of 100 profiles every twelve hours.

Since there currently is no legitimate way for Facebook Dating users to bypass the “likes” limit, and there are no premium membership offers.

Your best bet is to find ways to improve your profile so that your “likes” can raise. You simply cannot surpass the “likes” limit, if you are to somehow encounter an account that has passed the limit, it is likely a bot.

You must also consider how many people likely use Facebook Dating, with that thought in mind, you can understand why a limit must be set. If there was no limit on “likes,” it could lead to technical issues and could even cause crashes.

So, while it would be great to pass the “likes” limit on Facebook Dating, if you consider many users passing the limit, you should understand how it becomes more of a concern for the sustainability of the Facebook app.

You may come across claims of ways to bypass the Facebook Dating “like” limitation by using hacks or third-party software.

However, using these methods to try and bypass the limit could not only cause errors but could also get your account banned. You should not attempt or employ any claims such as these.

How To Get More Likes on Facebook Dating for Free?

While there are not many suggested methods as to how to bypass the “like” limitation on Facebook Dating, any methods you may come across will typically involve using some sort of exploit or third-party software to bypass the limit.

Attempting to use these types of exploits with your Facebook Dating account could result in errors with the application or even worse, a full account ban. Remember, that when you create a Facebook Dating account you agree to Facebook’s Terms and Conditions, and you declare that you will only operate the app the way that it was intended.

The use of third-party software could lead to app compatibility issues, or your account being banned for violating Facebook’s Terms of Service.

Unfortunately, there is simply no way to get free likes on Facebook Dating legitimately. The only for a user to get more likes is to receive “Super Likes” or to gather them the old-fashion way via another user sending them a “like.”

How Many Likes on Facebook Dating Profile Is Average?

Since peoples’ romantic interests vary so drastically, it is difficult to pinpoint an accurate number for how many “likes” is average for your Facebook Dating profile.

Attraction and how your profile is perceived play a big part in whether or not another user will give you a “like.” Attempting to estimate attraction is not something that is easily done, since it can vary drastically from person to person.

Generally speaking, it is very likely that female Facebook Dating users will receive a considerably larger amount of “likes” than their male counterparts.

It is also likely that users with an attractive profile will often tend to receive more average likes. Yet again, attractiveness is unique to each person.

All of these factors play a part in influencing your overall “like” amount, whether it is positive or negative. To find an average “likes” number for yourself, you could keep track of your “like” numbers and do some calculating to find out your specific average.

How Many Likes Is Average for A Guy on Facebook Dating?

As previously stated, there is no way to determine a definitive number for the average “likes” a male should expect to receive while using the Facebook Dating app.

There are simply too many factors that influence the outcome to account for. If you are a guy using Facebook Dating, you can expect fewer “likes” than when compared to female users.

How Many Likes Is Average for A Girl on Facebook Dating?

As previously depicted, there is no real way to figure out a definitive number for the average of “likes” a girl can expect to receive while using the Facebook Dating app.

There are simply too many factors that influence the outcome to account for. If you are a girl using Facebook Dating, you can expect to receive a larger amount of likes than when compared to male users.

These statistics are mainly due to a higher percentage of males than females on the dating service app. So, if you are weighing on whether or not you should give Facebook Dating a go, your odds are looking pretty good.

It is very interesting to see Facebook Dating make a sort of return to its roots, as meeting new people was the idea behind Facebook in the first place.

Also, it is easy to get caught up in how many “likes” you have or do not have; however, it is important to remember that it is not the number of likes that will determine how good you are at finding someone. Instead, it is the quality of the matches that you have made.

It can be discouraging to have a lower amount of likes on the Facebook Dating app but as previously stated, the longer you use the service, the more “likes” you are bound to receive.

Facebook Dating is still finding its bearings so it will be interesting to see how Facebook’s dating service goes and how many genuinely happy couples come out of the other side.