Home Do More Web & Search Does Omegle Report to Police? 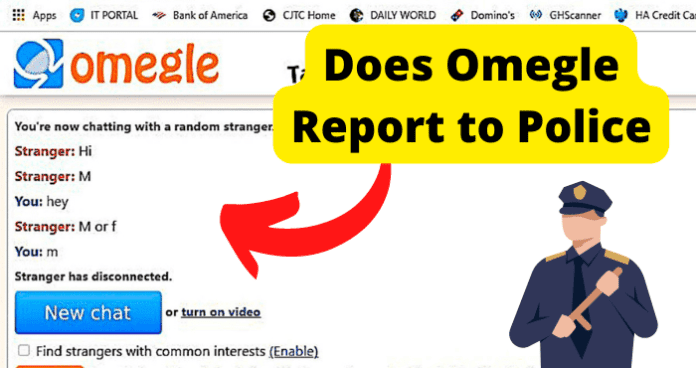 Users often wonder whether Omegle reports any wrongdoings to the police. To answer this question, we need to look no further than Omegle itself to know what it has to say about the data that it collects on the website and how it uses them.

Does Omegle Report to Police?

Yes, Omegle does report to the police. Omegle states that it has community guidelines that users must adhere to, violations of which may result in being reported to the police or other relevant law enforcement agencies.

They also go further to say that their community guidelines may not be comprehensive to identify every type of inappropriate or unlawful conduct or content.

Therefore users should be guided by common sense and an expectation that they should treat their fellow users with respect.

This means that you can be reported to the police for behavior that may not be listed in their community guidelines.

As a matter of fact, Omegle has a well-documented law enforcement guide that shows the kind of data that it retains for law enforcement to use when investigating reports. We have presented such data in the table below:

From there, you can see that your usage of Omegle can be recorded and reported to the police according to the limitations provided by the Omegle web platform.

No, Omegle is not illegal. However, Omegle is largely anonymous. Omegle is fully legal and cooperates with law enforcement from time to time when necessary.

Omegle says that it is anonymous because it wants to allow a safe platform where people can connect with other people of diverse backgrounds and experiences that may differ from their own.

This reduces the instances of prejudice and discrimination that may occur when people have to register personal details on the platform.

Therefore even though Omegle is anonymous, it is not illegal. Omegle restricts users of its platform to users from 13 and above who must be supervised by adults and to adults of 18 and above without supervision.

Can You Get in Trouble on Omegle?

However, many users are able to get away with inappropriate behavior on Omegle because, just as Omegle stated, moderation is not perfect.

For example, video screenshots for moderation are taken only near the beginning of the video chat. So if you share inappropriate video content much later in your chat, chances are that you will get away with it.

But if a user reports you for inappropriate content or behavior on the platform, Omegle can take it up and punish you by either banning you from the platform or reporting you to law enforcement, depending on the nature of your offense.

Another thing that you have to be aware of is that the United States state and federal authorities have agents who monitor the activity of users on chat rooms and peer-to-peer networks, including Omegle, Chatroulette, Chatrandom, and DirtyRoulette.

So, even if you are not reported or detected by Omegle for wrongdoing, you can still be caught by government agencies that monitor the Omegle website.

If I Do Something Illegal on Omegle, Will I Get In Trouble?

Yes, if you do something illegal on Omegle, you will get in trouble. As we explained earlier, Omegle monitors some activities on the website and also allows users to report other users for inappropriate behavior and content.

Also, state and federal authorities in the United States monitor activities on the Omegle platform for illegal behavior and content.

When you are found to be in violation of any laws, you are liable to face the consequences, which may be in the form of being banned from the platform or being reported to the appropriate authorities for prosecution.

Below, we have provided a comprehensive list of known activities on Omegle that could get you reported to the police.

1. Violations Of The Law

Omegle states that you must comply with all the applicable local, national, and international laws while using the platform.

Any content activity or conduct featuring, encouraging, offering, or soliciting illegal activity or content is prohibited and can be reported to law enforcement for prosecution

To be clear, this is the difference between Moderated and Unmoderated sections on Omegle:

Moderated sections are the sections that include video and chat for 13 and above and video for 18 and above.

The unmoderated section is the section that includes only chats for 18 and above.

All conduct or content that exploits, sexualizes, or endangers the safety of minors in any way is strictly prohibited in any of the Omegle sections.

Omegle reports such content and conducts to the National Centre for Missing and Exploited Children and the appropriate law enforcement agencies.

There is a list of other conducts that are prohibited on the Omegle site. However, these conducts are not clearly stated to be reported to law enforcement or the police.

They usually result in a ban, suspension, or any other punishment outside of involving law enforcement.

How to Prevent Yourself From Being Reported to Police on Omegle

If you want to prevent yourself from being reported to the police on Omegle, then all you need to do is to abide by the rules and terms of use of the platform.

Furthermore, as we explained earlier, there are other conducts that may not be listed on Omegle community guidelines which may also result in your being reported to the police.

This is why Omegle states that you should use your discretion to know what constitutes proper conduct on their website. In any case, breaking any of the rules listed in the section above will definitely result in your being reported to the police by imago.

In addition to the rules listed in the previous section above, here are all the possible conducts you should avoid if you do not want to get reported to the police on Omegle:

Threats of violence or threats to harm others are prohibited on Omegle.

This includes threats to harm others physically, attempts to intimidate others, terrorist threats, threats to obtain or disclose personal information or private content of others, or threats intended to force another user to engage in unwanted or inappropriate conduct.

You should avoid doing any of these if you do not want to get reported to the police.

Conduct and content that attacks or demeans others based on characteristics such as race, ethnicity, gender, sexual orientation, gender identity, immigration status, disability, or national origin are prohibited.

Harassment of any kind, including unwelcome sexual advances and solicitations, intentionally false reporting of others, and personal attacks, are also prohibited on the platform. Omegle can report any of these violations depending on their nature and severity.

Omegle also states that conduct or content that glorifies encourages, or promotes self-harm is prohibited. It may report such content out of concern for your well-being or the well-being of others.