Home How To Email & Messaging Does it Notify When You Unsend a Message on WhatsApp? 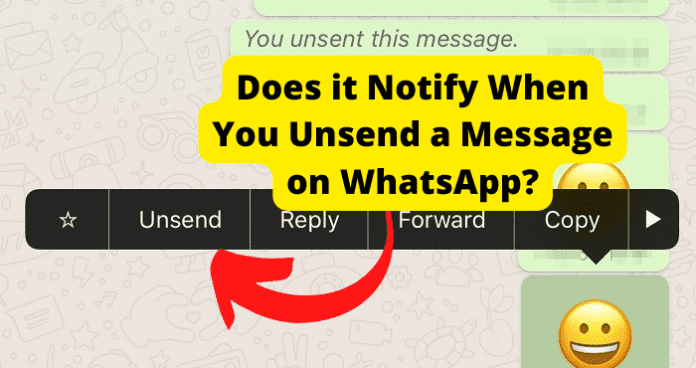 Does it Notify When You Unsend a Message on WhatsApp?

The short answer is no. It doesn’t notify you when you unsend a message on WhatsApp. The main reason it doesn’t is because you already know you unsent a message to someone.

If You Unsend a Message on WhatsApp, Will They Still See It in Their Notifications?

No, that message will disappear from their notification center. As soon as you delete it, the message that was previously there will go away so there’s no need to worry.

You can preview messages in the Notification panel on both Android and iOS. WhatsApp users can read messages without opening them, keeping the message status as ‘unread.’

This doesn’t mean they won’t see it. They might see there was a message and then that they can’t pull it up. This might make them investigate the messages more to see who it was and what might have happened.

If they don’t see it the first time, there still is a chance they will see it later if they look for it. This is a chance you take when you send a message through WhatsApp and there is little you can do about it.

The best thing you can do is assume everything you send on the internet is going to every one. This way, you won’t send anything that will cause you any issues later, and you will have no reason to delete any messages in the first place.

You also will keep yourself accountable.

How to Unsend a WhatsApp Message.

Then choose the message you want to delete. This will take the message off the chat, and it will look like you never sent it. However, if someone has already read it, there is nothing you can do about it. The message will still have been read by them.

To minimize this, you can delete a message you didn’t mean to send as quickly as possible. The chances of them actually seeing and reading it will go down.

There is a possibility that they will see the message on their notifications. They may not get the whole message that way, but they might see the beginning of it and who it’s from. This will depend on whether they have the notifications turned on at all.

If they do, there is a good chance they might see it before you get a chance to delete it. That’s why it’s so important to watch what you say if you are worried about them not liking it or if you want to stay professional.

The app ensured the receivers of the messages would not alert the sender whether he or she has read the message by keeping the read receipt option disabled.

While there could be many reasons to turn off the blue tick’s feature, it can also be upsetting to the sender who is expecting a reply and assumes the receiver will read the message eventually.

When this is on, it’s going to be hard to know if they have even read the message, but you can see when the message has been sent through the app. It should have a time stamp on it that tells you exactly what time it was sent by you or another person.

This is so they know something was said and can react to it. There will probably never be a time that a message is sent that doesn’t have the time attached to it. This is so everyone knows how long it has been since the last message was sent and who was sending them.

This is particularly true if you are trying to send the message and the app took a while to change or load. It’s better to assume the message was sent like it was supposed to be if you hit the send button and it’s no longer in the chat box.

That way you can act accordingly if you need to and delete the message. If you want to send the message, there is nothing you need to do except keep the conversation going.

What Happens When You Unsend a Message on WhatsApp?

1. It is Deleted from Their Side

Which means that they will no longer be able to see the message.

They will see that the message was deleted, but if they didn’t see it before you deleted it, then they will not know what was in the message and won’t know what you were talking about.

They may however ask you what you wrote and what you wanted to say. It’s your choice whether you want to tell them or keep it to yourself, but they will know you are keeping something from them.

2. It Disappeared from Their Notifications

When this happens, they won’t see the notification that there was a message sent in the first place.

This can help you if you didn’t want to say something right at that moment, but when they look at their messages from you, they will see the notification there was a deleted message they missed.

They might ask you about it later or you can tell them what you wanted to say when the time is right. They might also just not see it when they are looking at the messages.

If you unsend messages a lot, this could send a red flag to WhatsApp about your account. This can happen if you are using it a lot and constantly sending messages to the wrong people and have to unsend them.

You may get put on a restriction if this is happening because the number of times you are unsending messages is making them think you are a bit account. This is because bots will send messages to people and then delete them later, so they don’t get caught by the app.

They may send links or other malicious things that people can click into, and that will steal their information. This could also cause their device to be unusable in the future.

It’s a good idea to watch the number of messages you are deleting so this doesn’t happen to you. If your account is put on hold for this, then you can contact WhatsApp and explain the problem. They may be willing to give you your account back.

This means they will probably see there was a message and then it was deleted. This might make them ask you about it or if you needed something from them. This is because they want to keep their business running smoothly and professionally.

Sometimes we just make an error with who we are talking to and send the message to the wrong person. If that happens, don’t be afraid to tell them what happened. We all have done this and it’s not a big deal with its addressed right away.

If I Unsend a Message, Will the Other Person See It in Their Messages?

This goes for all chat groups as well as individual conversations. If you are only talking to one person, then the chances of them seeing the message are going to be higher than if it was in a group.

This is because there are fewer messages that are coming through. Just be upfront if you don’t want them to ask you about the message and explain the mistake. Sometimes we mistype something, or it’s not in the right place.

People will understand this and will most likely let it go.

Is There a Time Limit for Unsending Messages?

Yes, the time you have to unsend messages is seven minutes. This way you only get to delete messages you know are sent to the wrong person.

The limited time is to protect users from sending messages that are dangerous and then being able to delete them later.

Messages can be used in court cases of harassment, and this prevents them from being deleted because the sender knows they are going to get in trouble for them. They just either won’t send them at all or they will be there for the user’s safety should they need them later.

They also discourage people from sending random messages because they can’t get rid of them after a certain point in time. You will want to think about what you are messaging instead of everything that crosses your mind.

This makes things safer and a better experience for everyone involved.

How Can Someone Know If You Unsent a Message?

The number of ticks that appear next to your message indicates its status. If a user has not yet seen your message, then the ticks will remain blue. The message will turn blue as soon as it has been seen.

Only deleting the message from your side of the conversation will delete it. If you delete the message, it will be deleted for everyone.

A notification that the message has been deleted will replace the message on the person’s side, even if they have already viewed it. If you delete a message further up in the chat, the user will not be notified in a new chat if there are messages after that one.

The ‘Message deleted’ notification will only be in place of the deleted message. If they don’t scroll back up, they may never know you deleted a message.

The chances of this are pretty high if the conversation is running quickly and they don’t take the time to read all of the messages.

If you are in a group chat, the message will be deleted for the whole group. So, it’s possible at least one person will see it. If you are worried about it, then you probably don’t want to write anything in the chat that you don’t want to say in the first place.

It’s common for deleted messages to be more of a mistake that was sent to the wrong contact rather than something that shouldn’t have been saying.

Sometimes they are also questions that have been answered, and the person writing them didn’t see that before they sent the message. In this case, they may delete the message so they don’t look like they don’t know what they are talking about.

Why Can’t I Unsend a Message on WhatsApp?

The main reason why you won’t be able to send a message on WhatsApp is that you’re outside the 7 minute zone. You can only unsend messages 7 minutes from when you sent the message. You can’t do it after 7 minutes.