Home How To Software & Apps Does ChatGPT Have a Word Limit? 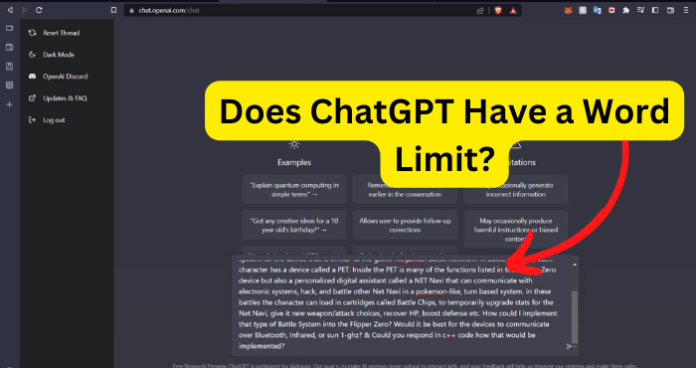 Many people who are currently utilizing ChatGPT have been wondering if there is a word limit for queries and responses. There have been reports of ChatGPT becoming unresponsive after so many queries or responses.

This guide will focus on helping you determine whether or not ChatGPT has a word limit or if there is access to unlimited words when using the service. So let’s dive right in and answer the main question of this guide, does ChatGPT have a word limit?

Does ChatGPT Have A Word Limit?

While there is no hard set word limit for ChatGPT, many people report that ChatGPT will stop answering queries after so many words. The general consensus is that after 500 to 1000 words, ChatGPT has the possibility to become unresponsive.

That being said, it is inconsistent in these word limits and your experience might not be the same as someone else’s. There is however thought to be a hard “token” limit that will limit the number of messages and responses that you are able to use.

Currently, it is believed that the hard token limit is around 4000 or so. This means that if your messages and responses combined exceed 4000 tokens, you will likely have to start an entirely new query.

That being said, the internal design of the token system has much to be discovered and you may find that you are able to exceed this limit or find yourself limited after lower token counts.

The best thing you can do is to try your queries and messages and see how long you can get them without running into issues with non-responsiveness. This will allow you to gauge for yourself what the word limit is for ChatGPT.

Luckily, there are some ways that you can get ChatGPT to say more to you once you believe that you have hit the word limit.

We will cover these methods in the next few sections below. Using these methods, you can get ChatGPT to expand on its responses and the number of words that you will be allowed to use.

How to Make ChatGPT Say More

The methods below can be used to make ChatGPT say more to you after you have reached the soft cap on the word limit. These methods may also prove useful for extending responses and allowable queries past the token limit as well.

While these methods might not always work, they have been proven to be useful in most cases. If you are interested in making ChatGPT say more, the methods below will prove very useful to you.

1. Once It’s Given You An Answer, Ask It To Expand

One of the easiest things you can do to get a longer response to your query is to ask ChatGPT to expand. ChatGPT uses advanced learning AI to be able to accurately determine that you have asked it to expand on a previously given answer.

ChatGPT will respond to the expand query to a previously answered query by automatically providing additional information. This is one of the easiest ways to get ChatGPT to increase the usual word limit on responses.

The same method can be used to get ChatGPT to respond to longer queries that you may have entered. There is a continuous function that is clickable while using ChatGPT that will cause the software to continue reading longer queries.

This is a great option for someone who has posed a particularly long query to ChatGPT. Long queries have been shown to cause issues with ChatGPT becoming unresponsive. Using the continue feature, you will be able to have ChatGPT read your whole query and provide a response that is ample to your liking by asking it the extend on that answer.

ChatGPT is a highly advanced piece of software that is able to understand simple and even more complex commands like continue and extend. Now for longer queries like bits of code or large questionnaire-style queries, you may need to use one of the other methods in this list to ensure that your queries and responses are what you are looking for.

One of the methods that you can use involves asking several questions instead of one. We will cover asking your questions in the subheading below and how it can help you get more detailed responses.

2. Ask What You Want In Subheadings

To use this method effectively, you will first need to determine what the main query you are presenting ChatGPT with will be. Once you have done this, try and come up with several different questions pertaining to the main query so that you can break the question up into much smaller parts.

Once you have come up with several relevant questions that all pertain to the original main question that you wanted to be answered, provide ChatGPT with the multiple questions in parts and ask ChatGPT to expand on the responses that it gives you.

This will give you several different long-form responses for each of the individual questions that will in the end lead to a more detailed answer in multiple parts for your original main query. This is a highly effective and streamlined way to use ChatGPT to provide more in-depth details on a single query.

The best way to do this is to simply think about the main question that you are looking for an answer to and think of several relevant questions that will provide ChatGPT with more queries to provide you with answers for.

There is one final method you can use to get ChatGPT to say more to you. This involves simply asking ChatGPT to provide more words for the given response. We will cover how to do this in the section below.

3. After Your Query, Say Rewrite This And Make This 1000 Words

Since ChatGPT is an extremely advanced AI software, you can simply ask it to rewrite any response that it gives you and make it longer. For example, after receiving a response, you can ask ChatGPT to simply rewrite the response and make it 1000 words.

ChatGPT will automatically formulate a response based on the desired word count and rewrite it to match your specifications. This is part of ChatGPT’s advanced AI technology that will allow it to understand the commands that you have given it and respond in turn.

It is currently unknown how long that you can ask ChatGPT to make your response but it is likely that you could exceed the 1000-word limit as long as there is enough information about your original query to fill the word space.

If the original query you gave is too simple, it might not give you an appropriate response if you ask to rewrite it in too many words. The best way to use this method is to be realistic about the amount of relevant information ChatGPT has access to and how many words you actually need to fill in.

Asking for a 10,000-word response will likely not produce the desired results. Keeping your rewrite queries to 1000 words or less will increase your chances of being provided a usable response to your original query.

That being said, there is simply no limit to what ChatGPT can do. It is a highly sophisticated AI learning software that could in actually provide responses that are much longer than 1000 words if so prompted.

ChatGPT will be continued to be developed to provide longer and more in-depth responses to queries in the future.