Home Do More Social Media Do Matches Expire On Tinder? 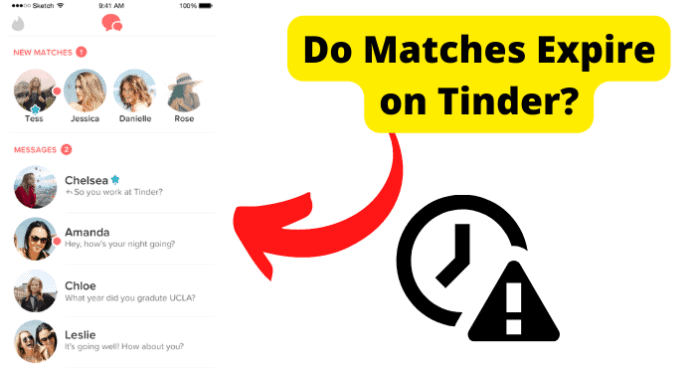 Every match means an opportunity to meet someone new… but wait, what happened to my match? Did I do something? Has my match expired?

Do Matches Expire on Tinder?

No, that crush you had on a perfect user did not vanish because the last sand grain has hit the bottom of the hourglass.

There is no ticking clock in Tinder, which means that no matter how long a match has been made or how long it was last interacted with, there is no way to lose the match due to time restrictions.

As opposed to other dating apps that might disregard a match if no attempts to communicate have been made by either party, Tinder does not pressure its users to establish a relationship with one another quickly.

Because of this, it is possible to message a matched individual weeks after the official match was made.

Even when this may be the case, a sense of urgency is always resonant to applications that depend on their users’ interaction in order for the platform to run correctly.

Although there is no real repercussion from the application itself if there nothing is done with a match, I recommend not acting upon matches that have been untouched for long periods.

Tinder is data that focuses on making quick matches with people that might have certain qualities and interests in common.

This means that the faster you act upon the opportunities found in the app, the higher the chance you might have to further your relationship with any given person on the platform.

Do Likes Expire on Tinder?

No, likes do not expire on Tinder either. Every like is available to both you and the other party involved in the like. Likes show others if you have a real interest in their time and what they can bring to you.

So it is important for people to be present for as much time as possible. So, don’t worry if you haven’t yet matched with your better half.

Since every like stays up in the servers, there is a bigger chance that in the future, you might end up matching with someone long after your like was created.

Even when likes can be believed to be one-sided, likes help Tinder to understand better how you interact within the app and what your placing is depending on the interactions had on the platform.

Likes are much more difficult to disappear from Tinder since likes do not require matching two people.

While likes do not grant you any sort of participation possibilities with other users, likes help create a more tailored experience for its users by understanding the type of people your likes usually follow.

This means that the more likes you make based on actuality, the better your possible matches will be. Thanks to the permanent nature of likes, the site’s algorithm will better understand how a certain user acts upon the platform.

There is no actual time limit for any matches or likes made on the app.

Even though there are no time limits in the application, this does not mean that there is nothing that can happen to have matches disappear from the application.

The following are the most common explanations as to why a match may have disappeared on Tinder:

1. They Have Unmatched You

The other person has unmatched you, which means that there is no longer any match to look for. More often than not, a missing match is due to the other person undoing the match.

This may be done for any sort of reason, the other person does not believe that the match is true anymore, or the first matching may have been a user error. Whatever the case may be, the person no longer decides to pursue the match, and the match is therefore deleted.

If you’re wondering if someone unmatched you, there are a few ways to know.

Another explanation as to why a match may be missing has to be with the possibility that the other party has deleted their account. If a profile no longer exists in the application database, then there are no metrics to attach to the said profile.

Dating apps tend to make their information unreachable by the average user once a user decides to end their account with the platform.

This is in contrast to sites such as Reddit, which retain posts and comments from a user even after their account has been deleted.

This is done mainly because the algorithm is mainly concerned with active users since they are the ones utilizing the app.

However, if they decide to come back to the app utilizing the same credentials as the previously deleted account, it may be possible to see their match after rejoining.

If you seem to have lost a match and after some time the match seems to reappear, that user has deleted their account to rejoin later.

3. Disappeared Due to a Glitch

It is possible that the match does still exist, but there is a glitch that is not making it possible to view the match. This answer does not follow the possible interference of the other party.

Updates are commonplace in today’s world and are meant to be patched to ensure that any cracks found in the code can be fixed.

While updates make it more uncommon for these types of errors to occur, there is still the probability that the app will not correctly assess matches.

If the problem is found within Tinder itself, you should not worry too much since the most likely outcome will be that the mismatch will be fixed in a timely manner.

Following the idea that if there is no profile, there may be no items associated with the profile, if the other party had their account banned or suspended, there will be no matches to analyze.

This is an answer in which the user had nothing to do with the matching going missing. A suspension or ban comes directly from Tinder instead of the user actively deleting their account.

This means that there has been a violation of the terms or conditions of the platform, and coming back to the site can be almost impossible, depending on what violations were actually made.

If you unmatch a person, the match that was shared between the two is lost. If you unmatch, that would be the only way to ascertain what occurred to the match correctly.

A match can only be lost permanently if any person makes it, so the matching is no longer viable.

How Long Do Matches Last?

So, matches and likes serve as metrics for dating apps to rank their users. The more values are available, the integrity of the ranking system itself follows the rise placed by the values.

It could be said that matches will last forever if there is no unmatching, deletion of accounts, or banning of accounts.

Apart from unmatching that requires the active participation of whichever party, there may be times in which glitches will appear and mistakenly delete a legitimate match.

It could be said that matches are permanent bits of data that, if not interacted with by the users, could remain for as long as the services of the application exist.

Matching has become a way in which two people can consent to begin a conversation within themselves in order to learn more about the other.

So while matches might be able to stay on the site permanently, there is no real guarantee that the person with whom you matched will have the same intent they had when the matching was made.

People change and keep reinventing and revising their view of the world and its people.

Considering that the only thing in human nature that never seems to change is changing itself, the safest bet to make is that acting upon opportunities sooner than later will ensure that the intent that the person had will still be present to them.

Do Tinder Matches Expire If You Don’t Message

No, there is no immediate need to send a message through Tinder to ensure the match will not be lost. Various modern dating apps such as Bumble have a 24-hour first greeting period in order to keep the match.

In essence, there is no need for any type of interaction between the users once the match has been made in order to keep the match.

It is, however, a good idea to message a potential match as fast as possible since doing this shows interest and makes the possibility of being unmatched in the future become more improbable.

Let’s say that you have matched with a probable romantic partner, but as time goes on, there is no intent made clear by either part of the match.

The most likely thing to happen is that one, if not both, of the people involved in the matching, will see that there is no actual interest behind the matching, therefore making the matching virtually nonexistent.

Even though it is not required for users to send a message, the main intent of the app is to get people connected and explore their possibilities to create relationships with people they may share values and ideals.

Matching may be the first step towards building a relationship based on an online platform, but it is constant and active participation with users that make the site viable for finding possible relationship partners.

No one wants to begin a relationship with someone who seems not interested in putting any effort into building a said relationship.

So what happened to my match? Where did it go? The most likely scenario is one in which the other party has unmatched, and therefore the match that was made no longer exists.

All of the available explanations deal with users’ active interaction with matches they have made.

All of these explanations deal with the possibility that the match was lost because one of the people involved in the match decided that there was no longer a true match.

While it is not imperative for a user to actively interact with matches in order to ensure that the match remains, interactions can be the decisive factor that will make it, so there is no desire to get rid of the match.

But even in scenarios in which no user directly interacted with the match, none of them are caused because a time limit has been reached.