With faster and faster network speeds, finding music, listening to music and supporting music has never been easier. You can find whole websites dedicated to the discovery of new artists and bands, not to mention with servers that are more than capable of streaming music rather than downloading it and placing on a device.

That level of accessibility has changed the way people discover music. Services themselves can be built around a musical preference. Do you like popular music? There’s a service for that. Do you like underground music? There’s a place for that. And many places offer the music freely and for a price, usually a monthly subscription or the choice to buy the music outright and you have the songs and albums for life.

Music is subjective; it’s an artform, after all. However, there’s an argument that can be made that much of mainstream music is, well, very formulaic. Too often you’ll find a song that sounds eerily similar to a song you heard a year ago or from another artist within the same genre. Mainstream music often aims to be more palatable or “family friendly,” very rarely taking risks. Underground music, on the other hand, aims to break most, if not all, mainstream molds and fosters a culture of artists that express ideas the mainstream wouldn’t dare step towards.

How would one find such a culture of music? Underground? Metaphorically, yes, but there exists websites now serve as the “underground.” These hubs host music, underground music, for you to discover. Below are some of the best sites for discovering underground music. 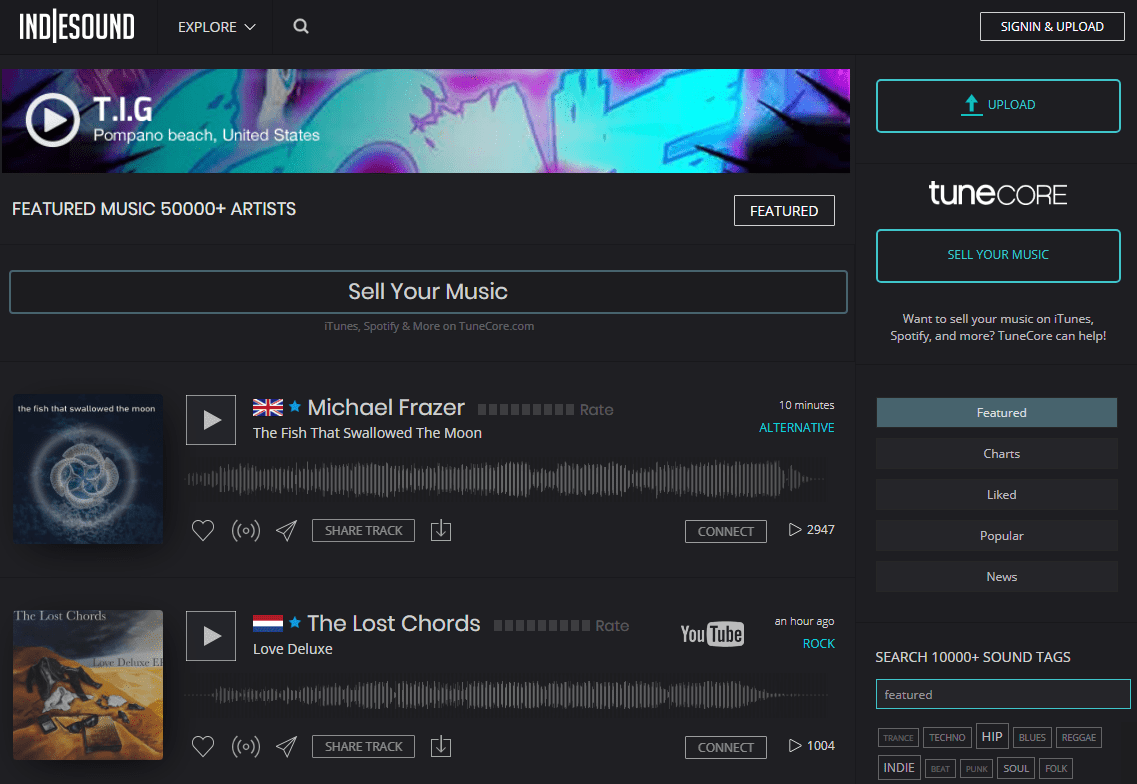 Indie Sound’s best quality has to be the way it handles the website. For starters, it isn’t just for the discovery of new music, no, it’s also a hub for artists to directly upload their music. You can find whole artist profiles on Indie Sound. And the best part? Many of the artists you’ll find offter their music for free (usually as an MP3). So, not only do you often get music for free, and have an outlet if you’re a music artist yourself, what’s there not to like?

Unfortunately, the only downside to Indie Sound is that there doesn’t exist an application. Not necessarily a deal breaker, to be fair, considering many artists allow you to download their music free of charge. In doing so, you can then move the music over to your device of choice that’s capable of playing the newly downloaded music. In reality it’s merely an inconvenience.

Indie Sound definitely earns a place on this list.

Every Noise at Once

Every Noise at Once is, well, an interesting beast. Just visiting their website will have you scratching your head until you click on one of the hundreds and hundreds of links. Now, it may seem like the songs are scattered randomly, but believe it or not, there does exist an order to the way music is listed–an algorithm works beneath the hood.

According to the creator, Glenn McDonald of The Echo Nest, it’s organized like so, “Down is more organic, up is more mechanical and electric, left is denser and more atmospheric, right is spikier and bouncier.” Those are, of course, objective descriptions of the songs you’ll hear, 30-second samples that will link you to Spotify should you have the need to listen to more from a particular artist.

Quite honestly, you could enjoy the entire front page with its 30-second samples. Though, admittedly, you’ll be left wanting more. Who would have thought “scottish techno” was a thing, but it can be found.

Every Noise at Once earns in place for having quite the library of unconventional genres of music.

Visit Every Noise at Once

Regardless of its questionable choices, SoundCloud is still one of the best sites to not only find music, but to upload your own music as well. And it’s alive, well, kind of.

Browsing SoundCloud and picking apart songs you like–whether it’s liking them or playing them–you start to build on SoundCloud’s algorithm, it’s Discover tab. By choosing to view the Discover tab, you’ll, well, discover new bands and artists based on the music you’ve been liking and listening to. And anytime you follow an artist, you’ll get notifications when they release new stuff.

But it does have a bit of a downside. For starters, if you want to listen to the music uninterrupted and have the best audio quality, you’ll have to fork over $9.99 (USD) a month. It’s a bit pricey, but if you like discovering new music every single day, that’s entirely up to you. You can always try out SoundCloud’s 30-day trial (only for GO+) and see how it works out before making a decision.

Be wary of your uploads, though. SoundCloud has been known to throw copyright takedowns at artists, otherwise SoundCloud is a great option.

Another interest beast is Bandcamp, and it is all about supporting its independent artists. Like several other websites listed here, Bandcamp gives its artists the power to upload their music. However, what it does differently is also provide a platform in which their music can be bought, which in turn supports the artists. It’s like buying from a record label.

Bandcamp even goes as far as to not allow you to create a user account until you support an artist of your choice by buying a song. You actually have to show an interest in supporting indie artists before you’re given “keys to the kingdom,” as they say. Once you’ve bought something, you’ll get an invite in the form of an email, letting you know you can now sign up.

No, this isn’t Reddit’s take on music. Instead ListenToThis is a subreddit on Reddit. ListenToThis attempts to capture that feeling of discovering an obscure band, but this time around you have a hub to share said music with other members of Reddit.

MixCloud has a major foot into dance music, but chances are you’ve already heard of MixCloud. While the name is similar to SoundCloud, they actually aren’t affiliated with SoundCloud; in fact, MixCloud is quite the competitor against SoundCloud.

When you pull up an artist or band profile, chances are you’ll hear very little about the band or artist themselves. If you want to do that, you’ll have to do some searching of your own with a search engine. However, RCRD LBL decides to not only provide you music on an artist, but a wonderfully written flash bio, a compact overview of the band and or artist.

It’s a great way of getting some history on the artist and or band, perhaps even connecting with their members.

Underground music is everywhere. Finding it isn’t as hard as it used to be, and finding music as obscure as “techno jazz metal” is probably a lot easier than you think. With so many websites slapping mainstream artists onto their frontpages, it can be a pain sometimes to find artists that are less successful, but just as talented if not more so than their mainstream counterparts. Oftentimes you find that underground music takes far more risks than mainstream artists and bands ever would.