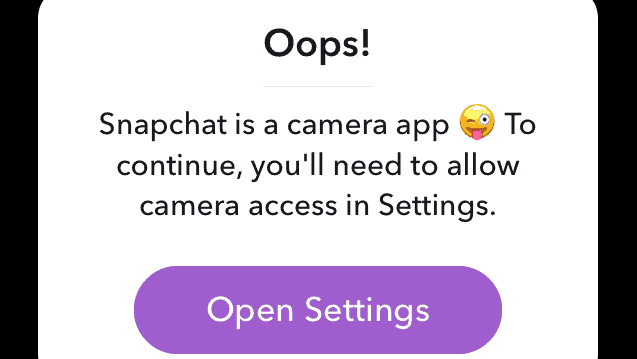 This message can be very annoying, and it doesn’t allow Snapchat to access and use the camera meaning that you can’t use Snapchat until you give it access. You’ll see a pop-up notification telling you that ‘Snapchat is a camera app! to continue, you’ll need to allow camera access in settings’.

However, once you do go into the settings app by clicking ‘Open Settings’, there is no camera option and you can’t toggle on the camera to allow Snapchat to have access to the camera.

You should try all of the steps down below and you should be able to get rid of the oops Snapchat is a camera app message.

Snapchat needs access to your camera in order for you to take snaps and send them to your friends. The app is pretty useless if you’re unable to take snaps because that’s kind of the main purpose.

You may have already given the app access to your camera but you’re noticing that the error is still showing up. This can be frustrating as it can feel like there’s not much more you can do as you’ve already tried to give Snapchat access.

You can’t allow Snapchat to access your camera and are shown ‘Oops Snapchat is a camera app’ because Snapchat has a failure in the system. When there’s a system failure, it asks for access to the camera even though you have already given it access.

This means that there’s not much you can do to fix the problem apart from trying out a few troubleshooting steps or waiting for the problem to go away. Bugs sometime’s come about in apps and they can cause unexpected errors.

So if you notice that the Snapchat is a camera app error is coming open when you’ve already opened settings and given Snapchat access to your camera, then it’s just a bug or glitch that isn’t too much in your control.

The system failure is caused by low storage on your phone meaning that you need to free up storage to get rid of the error. When you click on the open settings option, you’ll see ‘allow Snapchat to access: Notifications, Background App Refresh, Mobile Data’.

If you want to get rid of the error, getting rid of some storage could do the trick. Although the error doesn’t tell you directly that you need to clear your storage, clearing your storage might get rid of it.

Another reason you might see ‘oops Snapchat is a Camera App’ notification is if you actually haven’t allowed Snapchat to access your camera.

If Snapchat is unable to have access to your camera, then you’re going to miss out on Snapchat’s primary functions.

If Snapchat is out of date, then this could be why you’re getting the error. You need to have an app that’s up to date so that you avoid getting errors like the Snapchat is a camera app error.

Glitches and bugs manifest more when an app is out of date so making sure that you’ve update the app will allow Snapchat to gain access to your camera roll.

If you’ve just started to use Snapchat, you’re more likely to receive this error since it’s primarily shown to those who have just started using Snapchat. Before you use most apps, you usually have to allow the app to have access to your camera.

You’re also likely to be told to give Snapchat access to your camera if you’ve just updated the app and logged in.

Lastly, if you’ve messed around with a few settings on your phone and you’ve accidentally deleted some data, e.g. clearing Snapchats cache and getting rid of its data, then you’ll have to start using the app as if you’ve just installed it. This will trigger the Oops! Snapchat is a camera app error to show up as soon as you log in. 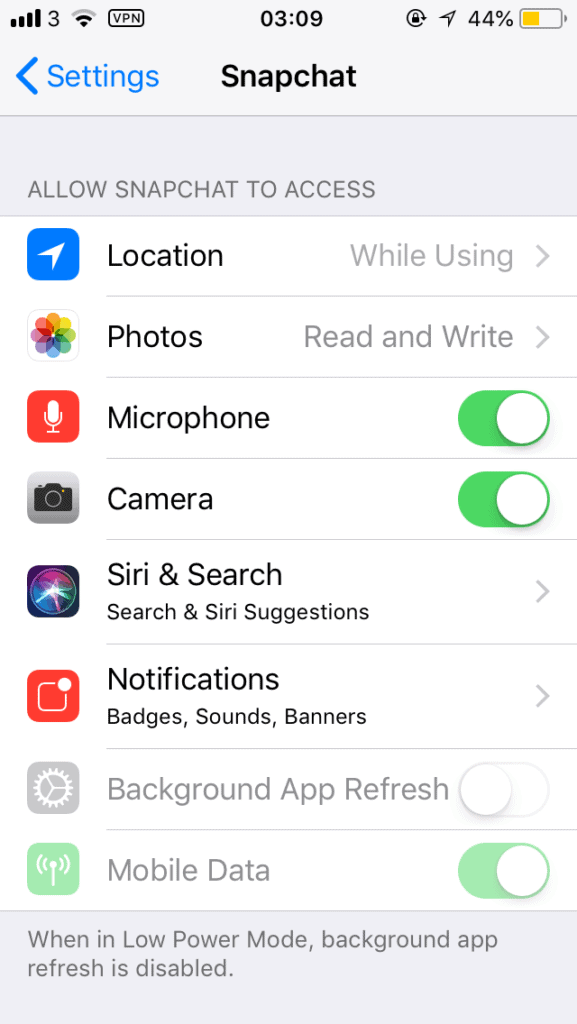 You may not see an option for the camera to give Snapchat access or you may not know how to allow access to the camera app at all.

To check if the camera option is available:

If it’s an option, toggle it on. If it’s not, go to the next step

When You Press on Privacy and Camera, Snapchat Doesn’t Come Up?

If you have gone to Privacy and Camera for Snapchat to not come up, it’s because you haven’t give Snapchat camera access. You’ll need to go to Settings > scroll down to Snapchat > toggle on Camera. When you visit privacy and camera now, you’ll see Snapchat as an option.

If you’ve given Snapchat access in settings but it keeps saying ‘Snapchat is a camera app! to continue, you’ll need to enable camera access in settings’ in Snapchat, then there’s a system failure that’s being caused by you having low storage space.

Fixing the Oops Snapchat is a camera app notification that just requires you to get rid of the error that isn’t allowing Snapchat to recognize that you’ve given it access to your camera.

1. Remove the App Limit to Allow Snapchat to Access Camera

On your iPhone, you’re allowed to have app limits and this will restrict your usage times for apps. If you have an app limited for Snapchat, you might experience problems with Snapchat if you’ve gone past your app usage limit for that day. To fix the Snapchat is a Camera app glitch, you’ll need to get rid of the app usage limit.

If you haven’t already tried this, you need to restart the Snapchat. When you restart the snapchat, it refreshes the page which allows any glitches that were causing Snapchat not to gain access to your camera in the first place.

After you’ve restarted the app, you can try and give Snapchat access to your camera again. If this doesn’t work, go to the next step.

3. Wait For Them To Come Out With A Fix

4. Turn Your Phone Off/On to Stop The Error From Showing

RAM stands for random access memory and its memory allows you to load apps and other features quickly, so you don’t have to wait a long time.

Over a long period of time, this builds up and can take away a considerable amount of storage. When you turn your device on, apps may run slower, but your storage has been reduced for the time being.

The main reason why an update would be released is to be able to get rid of a bug. If you look at the features of an update, you’ll usually see the term bug fixes. If you haven’t been able to give Snapchat access to your camera, this update would fix the bug that’s causing it.

6. Get Rid of Some Storage

Sometimes you can get the Snapchat error Snapchat is a camera app if you don’t have enough storage. Freeing up some storage space can get rid of this error.

If you want to make a lot of space quickly, then you need to delete a lot of apps. If you’ve deleted a lot of apps, but feel like you need all the apps on your device because they’re essential, you can offload some apps.

Offloading an app allows you to delete the app’s data and files, but still be able to keep the app on your iPhone – this removes its storage in your device.

To Offload an App:

Increasing your storage space can stop Snapchat from not having access to your camera roll.

7. Delete the Snapchat Cache and Restart Your Phone 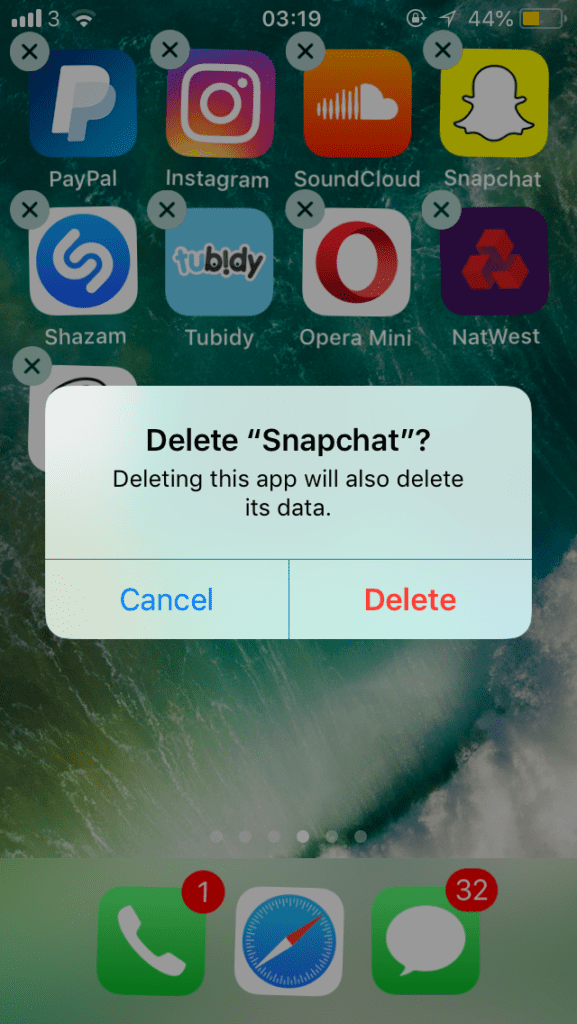 In order to remove a considerable amount of storage, you can wipe your Snapchats cache. Don’t worry, this isn’t going to wipe any of your messages, chats, memories or anything like that, it’s just going to wipe the temporary files that are stored in Snapchats directory. 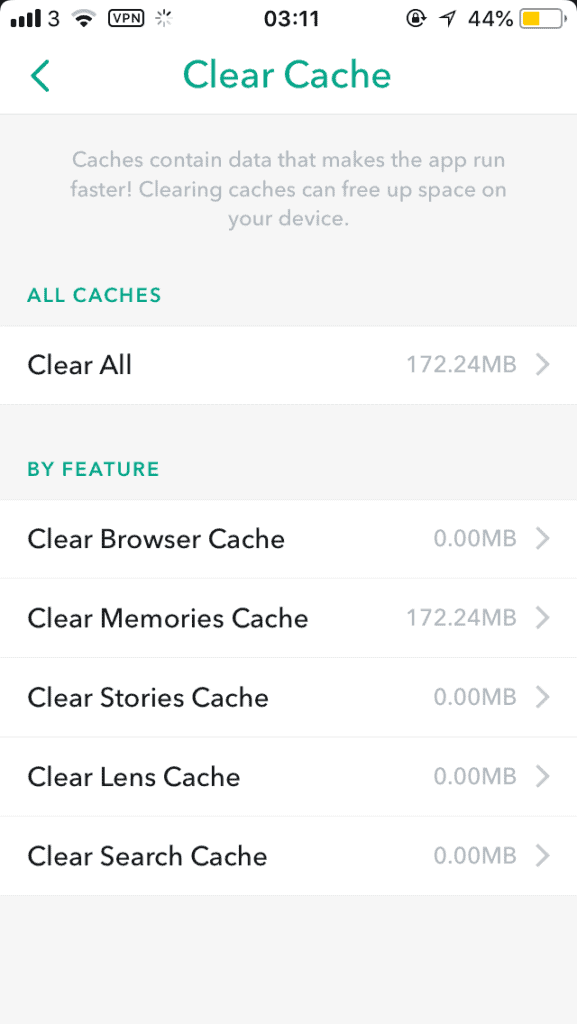 After you’ve done this, you need to close the Snapchat app from the multitasking switch and restart your phone.

This is going to make sure that your device registered the storage that has been removed therefore allowing Snapchat to function properly and remove the ‘Oops Snapchat is a camera app! to continue, you’ll need to allow camera access in settings’.

Snapchat now has access to your camera and you can use it as normal.